There are many ways to make up for crashing your girlfriend’s car into a pillar. Some buy flowers, others opt to take their spouse to a restaurant for a nice meal out… But you could argue that John Long had the most romantic way of all to make amends. A day after the unfortunate vehicle mishap, the Omagh man asked Lisa Pinkerton for her hand in marriage.

Fast-forward to June 16, 2018, and the pair were wed during a beautiful ceremony at Mountjoy Presbyterian Church, performed by Rev Jonathan Cowan.

Their wedding reception took place at the utopian Lusty Beg Island, which the couple chose due to its beautiful and peaceful setting. They also describe it as ‘feeling a bit more casual to other venues’ while offering a greater degree of privacy.

Lisa, a pharmacy technician from Omagh, first met John, a plumber, during a Young Farmer’s ‘It’s a Knockout’ competition almost a decade ago. They stayed friends for a number of years, even when John travelled to Australia between 2010 and 2012. However he returned to Irish soil in 2012, and the pair – who share a number of traits – began dating in December of that year. 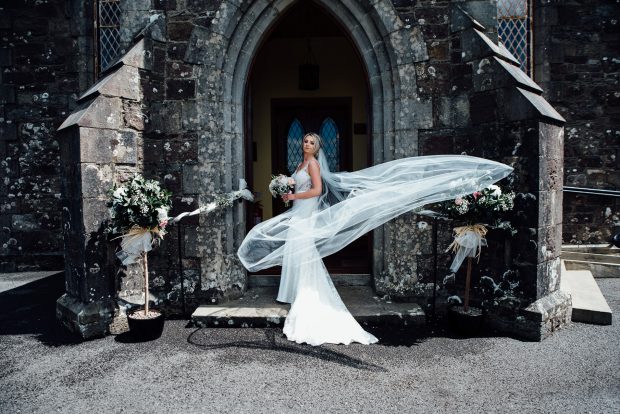 Lisa Long (née Pinkerton) poses for a photograph outside the church, as her long veil swirls delicately in the wind.

“We have very similar personalities,” Lisa said. “We’re full of fun, and both love our sports. We’re both very attracted to each other, and we’re kind, passionate and caring.”

It was on May 28, 2016 that John got down on one knee while on a romantic walk in the serene surroundings of Portrush. The proposal was particularly special for the pair as it was the date of John’s birthday, and the Omagh man picked out Lisa’s engagement ring himself.

“I was surprised and over the moon,” Lisa said. “I started crying; I was just so shocked, and of course I said yes. It was the most amazing feeling in the world,” she added. “The day before, John had crashed my car into the pillar at our house so he had some making up to do.”

Lisa explained that John had spotted an engagement ring which he believed to be perfect, online. It featured one shining large diamond in the centre, with small diamonds nestled on each side. But after finding out to his peril that the jewellers in Belfast didn’t sell it, John and his mum Dorinda journeyed to the Maiden City to purchase it. 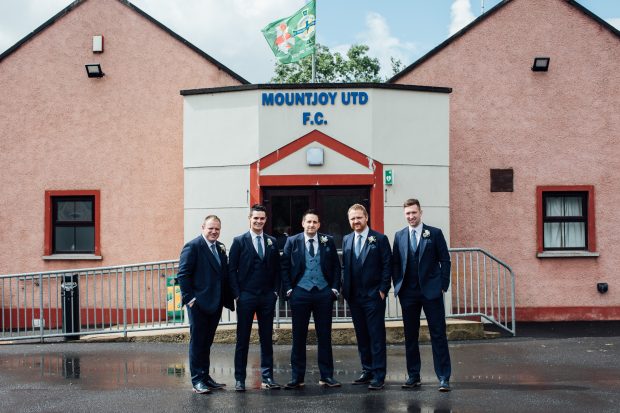 “I fell in love with the ring as soon as I saw it; it was absolutely beautiful,” Lisa said. “It was even more special that he had picked it himself without me even knowing.”

Lisa said that both her and John had their heart set on a wedding in Lusty Beg from the very beginning, particularly as they had attended a friend’s wedding there two years prior to their engagement and had fallen in love with it. “They had the date that we wanted, and we booked it within two months of getting engaged,” Lisa said. “Everything else just worked around that.

“However at the beginning, I didn’t really have an idea of what I wanted our wedding style to be like,” Lisa recollected. “I just wanted something plain and simple, and I guess if you knew me you’d have known that there was going to be pink somewhere in the colour scheme.”

For Lisa, wedding dress shopping was made all-the-more easy as she had her trusty sister, Emma by her side. And it was in bridal shop number two that she found her perfect wedding dress – an off-white sparkling number, decorated with dainty lace and plain crepe material at the bottom.

“My sister, Emma and I had selected a few dresses in the second shop and every one that we had picked were all by the same designer, so we both had an idea of what style I was going for,” Lisa explained. “It wasn’t the first dress I tried on, nor the last, but when I wore it, I just knew that it was going to be the one. It had a mixture of all that I wanted and it was something different for me.” 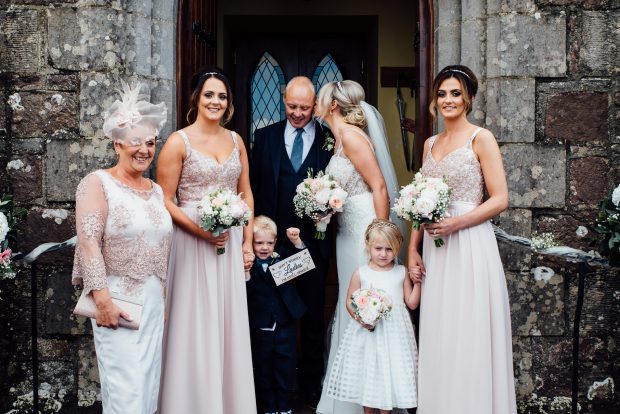 When the pair’s big day finally arrived, Lisa remembers feeling an whirlwind of emotions – she was excited, nervous and filled with adrenaline. Meanwhile John said that he was excited, and only felt nervous when the time came to recite his speech at the reception.

With the warm summer sun shining from the sky, Lisa was whisked away to the church in a lovely limousine. And as she made her way up the aisle with her father, Garry, her two friends, Sarah and Lauren played the song ‘Perfect’ on their violins which created an amazing sense of atmosphere.

“Our service was beautiful,” Lisa said. “Reverend Cowan made some light-hearted and personal comments during the service, which made it a bit more relaxing for us both. “This meant a lot to me as all the emotions hit me at once in the morning, and walking down the aisle was the hardest part,” she added. “But after that, I began to relax and I had the most amazing day.” 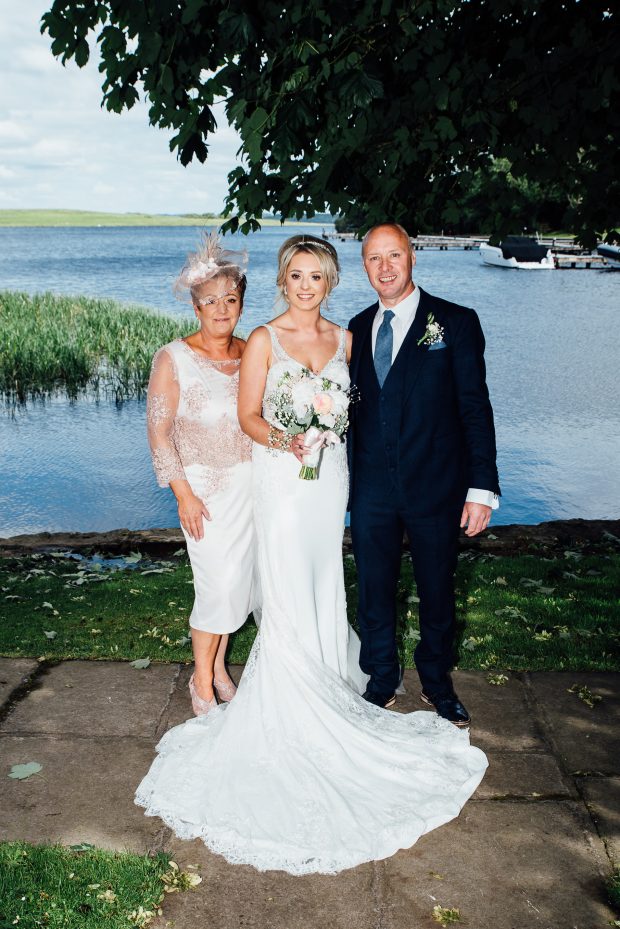 Blushing bride, Lisa Long (née Pinkerton) looks beautiful on her wedding day, which she celebrated alongside her mother, Barbara and her father, Garry.

And as the pair left the church as man and wife, Sarah and Lauren serenaded them once again on their violins, this time with the song ‘Marry Me’. “It just made our wedding feel that bit more special for us both,” Lisa said.

Later at the isle of Lusty Beg, the pair’s guests partied well on into the night, with the dance floor welcoming everyone from three-year-olds to 83- year-olds. “Our wedding was all that we could have imagined and we would change nothing,” the 27-year-old concluded. “It was a day to remember for the rest of our lives.” 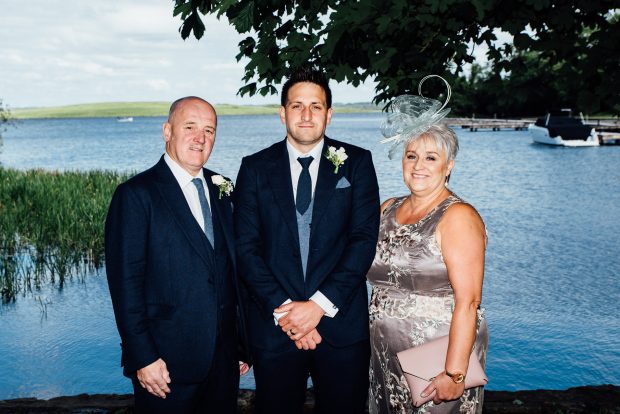 Groom John Long shares the many happy memories of his wedding day with parents,
Robert and Dorinda.