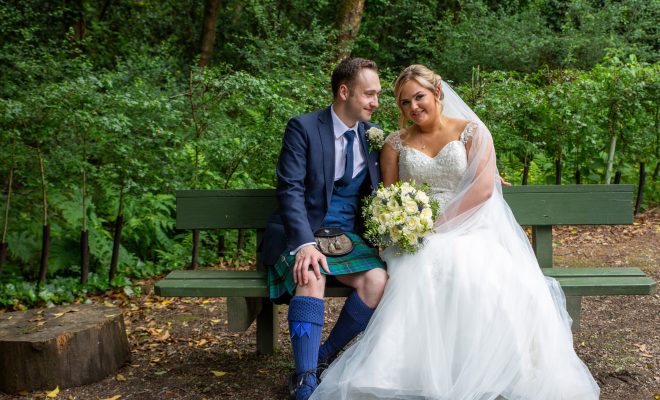 A magical day that Tracy and Josh will remember… Always

A proposal overlooking a crystal blue ocean transformed into a magical wedding day that was planned to perfection for the new Mr and Mrs McKee. Walking down the aisle to one of her favourite tunes, ‘Highland Cathedral’, Tracy Liggett wed Joshua McKee at Lower Langfield Church of Ireland, Drumquin during a traditional, charming and regal ceremony performed by Reverend Robert McKeogh on June 22, 2019.

The newlyweds’ wedding reception took place at the stunning Silverbirch Hotel in Omagh, chosen by the pair due to its good food and large function room. On the big day, it was lit up beautifully with coloured roof lighting while its crystal-clad chandeliers created an other-worldly feel for guests who enjoyed seeking out the special Harry Potter secrets hidden throughout the room.

Josh, a solicitor, first met Tracy, a teacher from Drumquin, through friends on a hockey pitch in Belfast in September 2014. However, it took the Portavogie man almost a year to officially ask out the Queen’s University graduate, and finally did so during a formal dinner which they were both attending on the five-star Sunborn yacht hotel in Gibraltar. 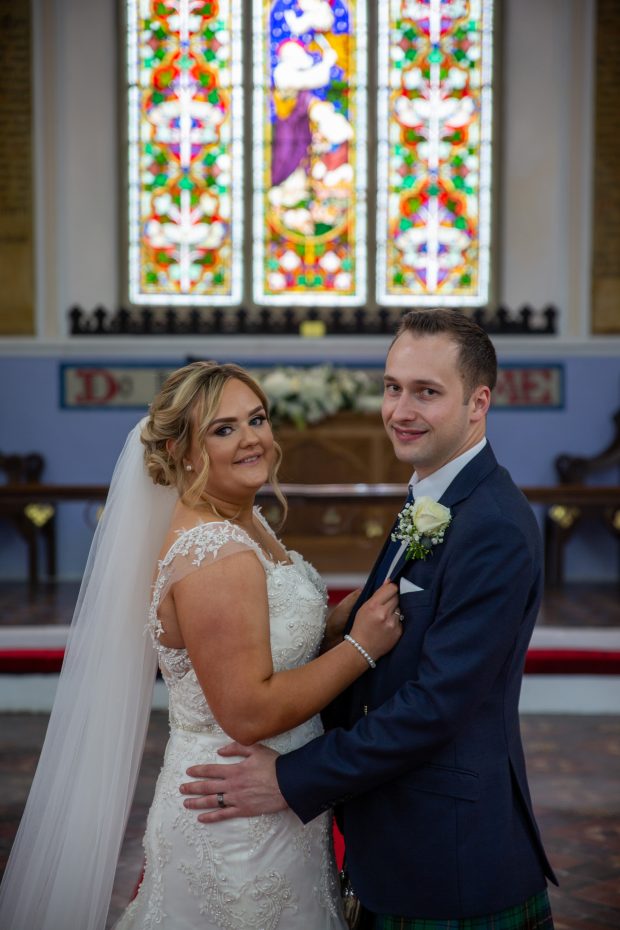 Tracy and Josh McKee were wed in Lower Langfield Church of Ireland, Drumquin.

“Josh was very quiet, but had a nice smile, and he didn’t realise how great he actually was,” Tracy, daughter of Mervyn and Lorraine Liggett, recalled. “He has always been modest and hardworking.” Together for three years, it was during a beautiful summer’s morning at Mussenden Temple near Castlerock on May 7, 2018, that Josh, son of David and Dianne McKee, got down on one knee and asked Tracy for her hand in marriage.

“He walked around awkwardly while waiting for tourists to leave the temple,” Tracy smiled. “Then, when I turned around from the window overlooking the ocean, he was on one knee. It was very romantic! We are both quite adventurous and love the outdoors, so we spent the rest of that day walking around the Giant’s Causeway with friends,” she added.

Tracy always knew that she would marry Josh as the pair had talked about it a lot, but they had put off their engagement until they had both completed their various university degrees and found jobs. “But when Josh proposed, I was relieved and felt so happy that we had both finally got everything we wanted.” Tracy’s unique engagement ring featured one large diamond nestled inside a rose-shaped diamond setting, with smaller blue sparkling sapphires on either side. “There are also two smaller sapphires set in the side of the ring, which is unique to Vera Wang rings, to ensure the bride always has something blue on her wedding day,” Tracy explained. “I absolutely loved it, and no-one else I know has an engagement ring the same.”

After celebrating their engagement with loved ones, the newlyweds’ planned many weekends away in various hotels to ensure that they chose the perfect place for their reception. However, when it came to her summer’s day wedding ceremony, Tracy had her heart set on just one place: Her childhood church, located in the heart of the Drumquin countryside. “I had always dreamed of a traditional wedding in Lower Langfield Church,” Tracy reflected. 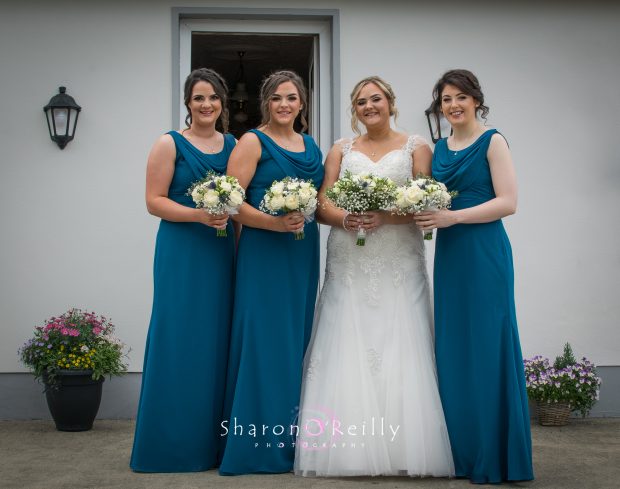 The new Mrs Tracy McKee enjoys a busy morning getting ready with the girls.

“Josh was adamant that he was going to wear his green Davidson tartan kilt for his wedding, and this is what led to the colour scheme of petrol blue and green. “This, then, inspired us to have some Scottish themed elements, such as the thistles in my bouquet.”

Though Tracy visited a few shops in search of the perfect gown with her mum and bridesmaids, it was actually one day when she was shopping alone that she found ‘the one’. The gown, from ‘Now and Forever Bridal’ in Newtownards, featured a beautifully fitted design decorated with sumptuous pearls, beads and shimmering sequins and a long, flowing train.

The owner of the store, Karen also helped the former Omagh Academy student find intricately decorated straps which were later added to the number, by talented dressmaker, Emma Cummings from Castlederg. “I chose my dress as I had always wanted embellishments, and detailing at the bottom and along the train to catch people’s attention as I walked down the aisle,” Tracy recounted. “I loved the pearls, and carried this theme throughout the wedding in jewellery and by adding them to the flowers and the cake too.”

On the morning of Tracy’s wedding day, the weather simply couldn’t have been nicer: It was warm and bright, but not too sunny which made it perfect for the photographs outside. Arriving at the church in a stunning Chrysler eight-seater limousine, Tracy recalls the wedding ceremony simply ‘flying by’ – not least because she knew the service off by heart, after typing, printing and making the Order of Service, with the help of her friend, Catherine Garrett. 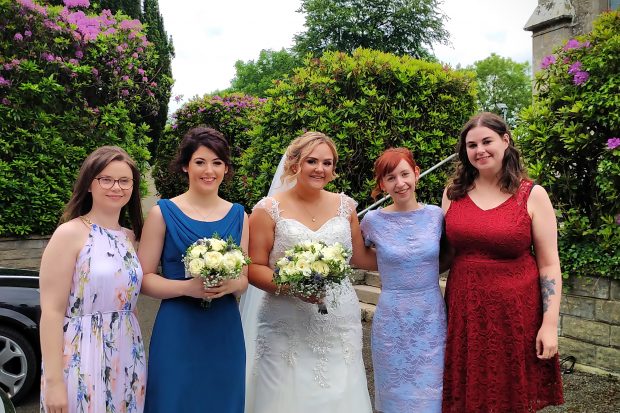 “The congregation have said that the service was very elegant and regal, and that it was beautiful from start-to-finish,” beamed Tracy. “For me, there were a few nervous moments during the ceremony: I could barely sing the first hymn because I am not sure if it was me or my Dad shaking, and the best man had a hard time fumbling in his sporran to get the rings, but he did a fantastic job staying composed.

“The music in our service had many sentimental values,” Tracy added. “Josh is a talented bagpiper, and his uncle, Richard McKee piped me down the aisle to one of my favourite tunes – ‘Highland Cathedral’. We also chose our favourite hymns, ‘I Vow To Thee My Country’ which was played at the Duke and Duchess of Cambridge’s wedding, and ‘As The Deer Pants For The Water’, which was a well-known one for all my friends from school who attended.”

But perhaps the most special part of the day was the music which played during the signing of the registrar, performed by a former pupil of Tracy’s, Callum Lucas. “He was the star of the show, and even brought me to tears during the wedding rehearsal,” said Tracy. “He performed John Legend’s ‘All Of Me’, and Shania Twain’s ‘From This Moment On’. “His vocals and guitar playing were perfect, and it was amazing to see such a young person perform so confidently in one of his first wedding solos, making me really appreciate my job and all the talented young people that I meet.

I would say the wedding was a huge success overall, and it was truly the best day of our lives!” the 26- year-old concluded. The new Mr and Mrs Kee have expressed their thanks to everyone who came and took part in their special day, particularly those who travelled from France, Spain and England, as well as Joshua’s family from the Ards Peninsula who had quite the trek.

The pair would further like to thank Rachel Browne and the staff at the Silverbirch Hotel, Omagh for all their hard work and dedication to making their wedding day perfect. 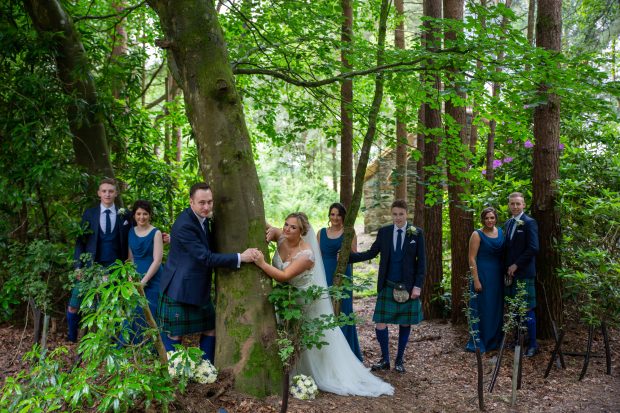