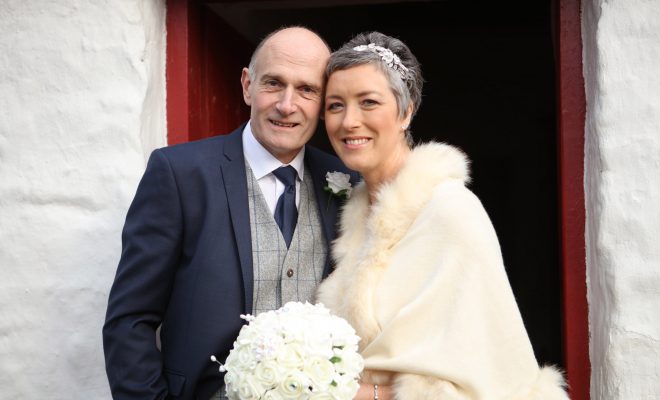 The beautiful Winter sun shone down on Alison Stewart and Kenny Humphreys as the dedicated couple enjoyed a spiritual, heartfelt and personal wedding day.

The pair were wed on December 28, 2016 at Mountjoy Presbyterian Church during a moving ceremony performed by Rev Jonathan Cowan and Rev Darrin Thompson. Alison, who is the manager of the Carlisle Bookshop in Omagh, first met Kenny in the Summer of May 2008 through a mutual friend. 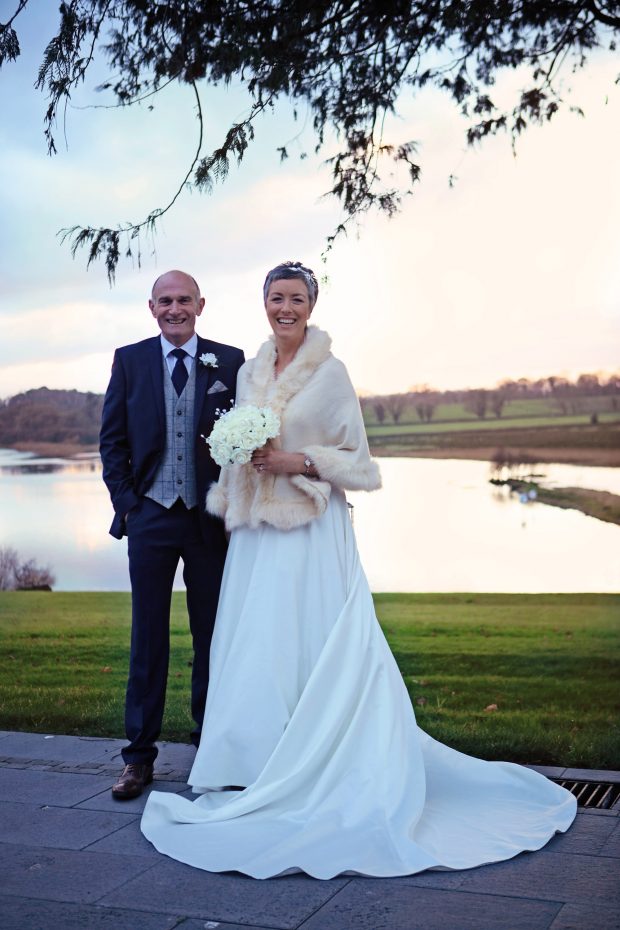 Kenny and Alison Humphreys admire the the beautiful views of the glistening lake at the Killyhevlin Hotel, Enniskillen on their Winter wedding day.

“I thought he was a lovely man, and someone who I wanted to get to know better,” Alison reflected. “He would say the same. “I felt very comfortable in Kenny’s company and he’s got a good sense of humour. He’s an all-round great guy!”

Together for five years, it was on the day of Kenny’s 50th birthday – January 28, 2013 – that the Enniskillen farmer surprised Alison with a truly romantic proposal.

During a nice picnic which the pair were enjoying on the soft sands of Rossnowlagh beach, Kenny got down on one knee and asked Alison for her hand in marriage.

“We were both very happy, and I cried,” Alison said. “We picked my engagement ring afterwards, and chose one which had a gold band and three diamonds.”

Alison explained that the pair were in no hurry to plan for the wedding, and ‘had absolutely no set ideas about anything’. “However, we agreed that we didn’t want a lot of fuss, and wanted something simple and straight forward,” she said. “In the end, I think we had a traditional wedding ceremony but with a few modern twists.”

The Mountjoy woman simply wasn’t interested in traipsing around a wealth of wedding dress shops to find her perfect gown. But happily, with her beloved family by her side, Alison managed to find just the right one for her in the second shop she visited. 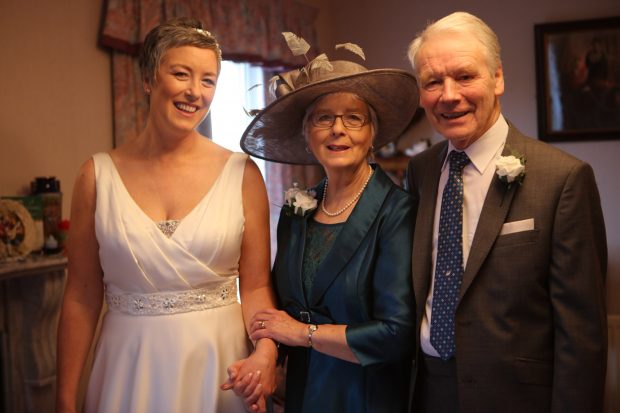 Beautiful bride Alison Humphreys (née Stewart) smiles alongside her beloved parents, Rene and Patterson Stewart on the day of her wedding.

“I was actually meant to go window shopping for my niece’s bridesmaid dress but my family decided to come too for the craic,” she explained. “We had a lovely time, and I got my wedding dress when I didn’t plan to.”

Purchased from Diamonds and Pearls in Enniskillen Alison’s chosen gown was ivory in colour and featured a long train, a classic cut and a pretty jewelled waistband. “It fitted perfectly,” Alison said. “My family and I agreed that it was simple and elegant. I felt a million dollars on the day.”

Alison described her wedding service as ‘heartfelt’, ‘personal’ and a ‘real celebration’, and said herself and Kenny were deeply moved even though they shed no tears. 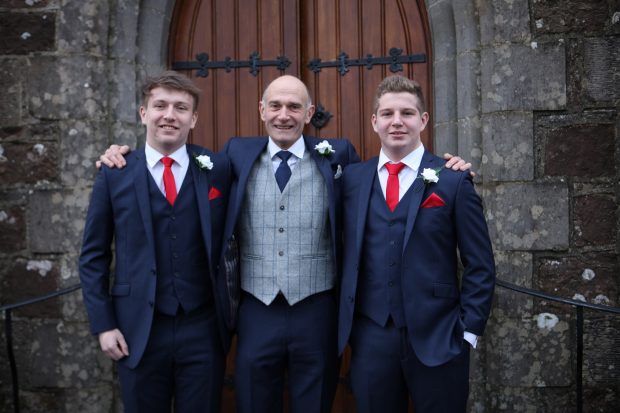 Groom, Kenny Humphreys looking smart on the day of his December wedding, and his two beloved sons, Stephen and Andrew who shared the prestigious role of best man.

“Kenny put together a photo PowerPoint of both our lives and families, and we had family members reading, playing piano and guitars and singing,” she reflected. “My three nieces and two nephews, along with my husband’s two teenage sons took part in the service – so we were the golden oldies!

“My husband also plays in Letterbreen Silver Band so some of the members played before and during the service which was lovely too.” She added, “It was a real celebration because I had been diagnosed with breast cancer exactly a year previous and we had had to postpone our July wedding because of my treatment. “We both really appreciated and were thankful for where we were in terms of love, health and faith.”

Whisked away to their wedding reception in the Killyhevlin Hotel, Enniskillen via classy vintage cars, the pair simply couldn’t wait to get their pictures taken by the hotel’s glistening lake. “The weather was just beautiful,” Alison described. “It was mild and dry, and the sun even came out for our photographs. We couldn’t have asked for better in December.” 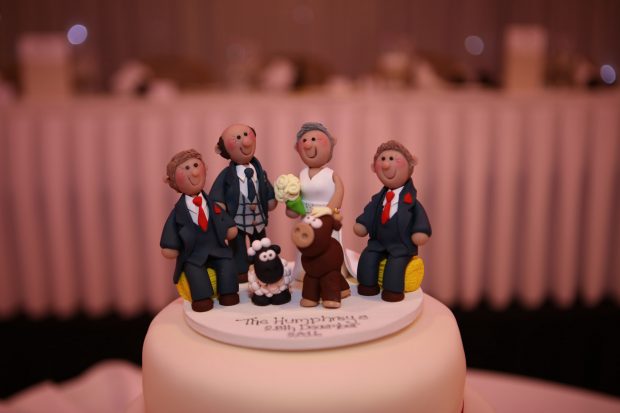 After tucking into their three-tier ivory wedding cake, topped with a cute clay model of the pair and Kenny’s two sons, it was time for the newlyweds and their 100-plus guests to dance the night away to Enniskillen wedding band, ‘Addiction’.

“We had a wonderful day,” the 48- year-old concluded. “God gave us our wish list of requests, even down to the weather and still having good daylight by the time we arrived at the hotel because I wanted photos by the lake. “I was very thankful to be getting married after a crazy year.” 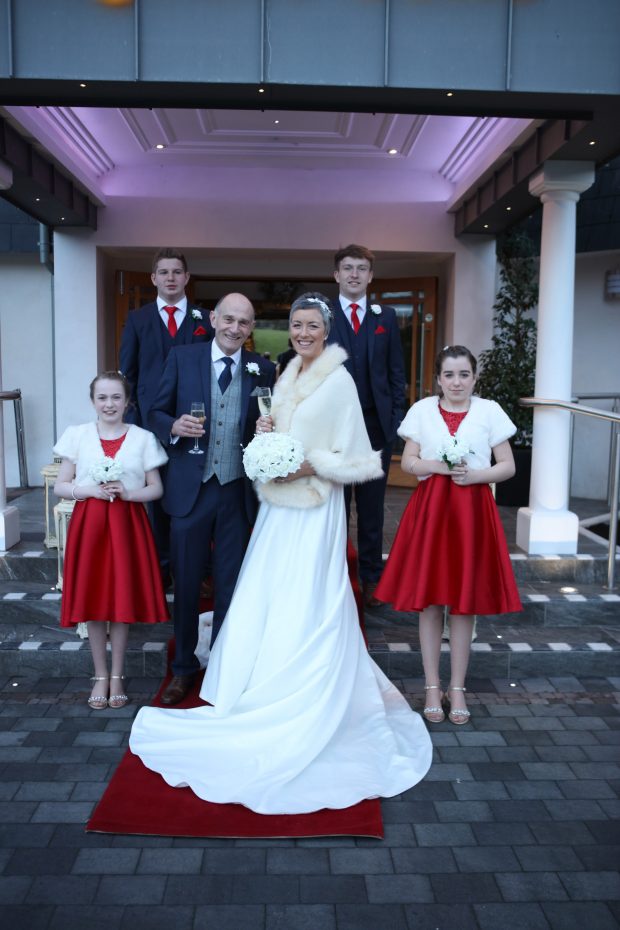