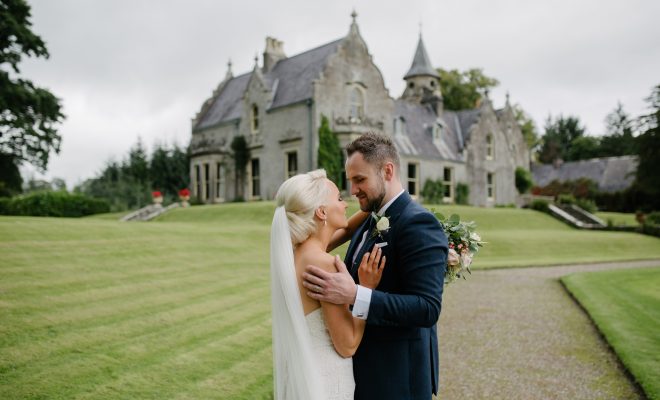 All things bright and beautiful at Paula and Colum’s wedding

If Paula McCaffrey could describe her wedding day in just one word, it would be ‘beautiful’. Not only did her close friend play gorgeous music to add a personal touch to the ceremony, but Paula loved the elegant flowers, the priest’s special Mass, the heartfelt prayers and the readings too.

A precious glowing candle was also lit by Paula’s sister in remembrance for their brother who passed away six weeks before the wedding day. It was an emotional day, but indeed a beautiful day, for Paula and Colum Sharkey who wed on September 1, 2018 at St Mary’s Church, Drumragh in a ceremony officiated by Monsignor Joseph Donnelly.

The newlyweds’ reception took place at the ‘homely and cosy’ Hotel Kilmore, Cavan. It was chosen by the pair as the location wasn’t too far away for family and friends to travel to, and they said the surroundings outside the hotel were simply perfect for photographs. 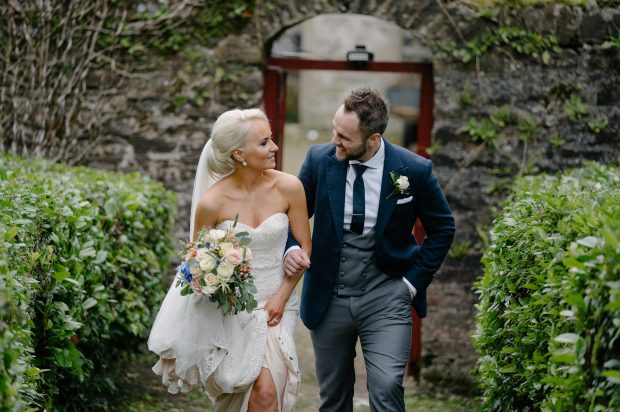 Paula and Colum in the grounds of Tempo Manor.

Paula, who works in the Cardiac Unit at the South West Acute Hospital, first met Colum, an electrician from Omagh, on a night out in Sallys in November 2013 and they began dating a month later. “It was history from there on in,” she said.

“I liked that Colum is very hard-working. I also think that he’s hilarious and witty. But most importantly, he is the most caring and kindest person that I know.”

Together for three years, it was during a romantic weekend away to Killarney that Colum asked Paula for her hand in marriage. “It was very cold, but he wouldn’t let me put my hand in his pocket the whole day on the Saturday,” Paula recalled. “I got very cross about that, but little did I know that he had a ring in his jacket pocket.”

During a walk through the picturesque Killarney National Park, Colum got down on one knee and presented Paula with a sparkling platinum, cushion-cut, diamond halo engagement ring. “I was shocked as I hadn’t expected it at all,” Paula said. “But I was also completely overwhelmed with delight. The ring he chose for me was perfect; I couldn’t have picked any better.”

The pair decided to enjoy their engagement alongside their family and friends for a good month before planning for their traditional wedding day. “But I didn’t really have a theme, as I personally think that they don’t date well,” Paula said.

Big Tyrone fan, Colum Sharkey with his groomsmen, Aidan Nicholls, Barry Sharkey and Patrick Irvine gearing up for his wedding day followed by the All Ireland Final on the Sunday.

“I just wanted something classic that ties-in along with summer, and that in years to come, looks timeless. “I’m quite a traditional person, so I kept everything quite traditional, bar the cake… There was no fruitcake in any of my tiers!” she laughed.

As Paula is petite, it took her weeks to find her perfect gown, and her wedding dress experience was “anything but stress free”. “In the first shop, I tried on ten dresses all of which I didn’t like,” Paula said. “I couldn’t find anything that suited me.” Thankfully however, Paula’s second appointment did not disappoint and it was in McElhinneys, Ballybofey that she found the perfect gown.

The fully-crocheted number featured a lovely champagne colour, and its strapless, and fitted design proved perfect for Paula’s small stature. “When I saw my dress, I knew that it was the one; I didn’t even feel the need to try it on,” she reflected. “The experience was then all worth it. The store also made me feel so special, with all their extra added touches.”

Paula described her wedding day as a very emotional day for both families. “There were so many emotions,” Paula said. “I was so nervous, but yet the excitement took over that thankfully. The weather was also gorgeous; we were very blessed to have such a beautiful, dry day,” she added. “I forgot to put the Child of Prague out the night before, but I put it out that morning and it worked!”

Colum and Paula with flowergirl Erinn and pageboy Conan at their hotel reception.

Paula and Colum’s wedding ceremony featured a wealth of personal and emotional moments from beginning until end. “Everything from the priest saying the Mass, to the flowers, prayers, the readings and readers, were beautiful,” Paula said.

“The service was very emotional, as we were missing my brother and my husband’s aunt who are unfortunately not with us anymore. “Their presences were very much missed. A prayer was offered up and a candle was lit by my sister in remembrance for my brother who passed away six weeks before our wedding.” Paula added, “The music was beautiful, and it was played by a close friend of mine, which made the service even more special.

“The flower girls, my nieces, Avieen, Macy, Erinn and page boys, my nephews, Ronan and Conan were on the best behaviour, and did a great job. Everyone was so supportive and helpful.”

The 28-year-old concluded, “It was an emotional day for both families, but a day we will look so fondly back upon. “From start-to-finish, the wedding could not have went any better. “I’d like to say thanks to all our family and friends that helped along the way. We could not have done it without their help and support.”