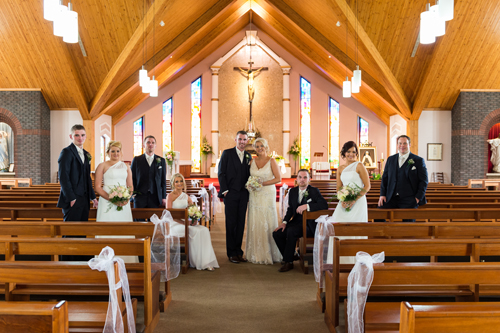 An Irish touch at a truly Hollywood wedding 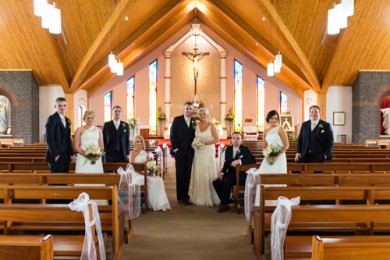 During the wedding reception Megan’s cousins Seana and Liz performed an Irish dance as a little surprise for the couple and it really was the icing on their big day.

“They are both brilliant dancers,” Megan said, “It was a lovely surprise at the reception.”

Megan from Clonoe and Gerard from Gortin met while on a night out eight years ago in 2007.

“We met so long ago in the Greenvale in Cookstown,” Megan recalled. “It was my chief bridesmaid Naomi Hughes who introduced us.”

It was just before the couple emigrated to Australia that Gerard decided to pop the question to Megan.  She explained, “He proposed in December 2011. We were getting ready for his football dinner dance, he called me up to his room and as I opened the door he was down on one knee and holding the ring asking will you marry me?

“We has chosen the ring together in April that year but even though I knew it was going to happen I was still in shock. I didn’t know when or how it would happen and it turns out it was a simple proposal which was just perfect!”

Before moving to Melbourne the couple got straight to work planning their wedding, “Before we left we booked the ceremony, reception and band. I booked everything else through email and Facebook. I was so grateful that everyone was happy that I could contact them that way.

“We came home three weeks before the wedding and did all the final organising then. My mum and chief bridesmaid where a great help.”
Planning from the other side of the world wasn’t the only difficulty though.

Megan said, “Trying to find my dress was difficult. I was visiting home two years before the wedding and went shopping with my mum but I wasn’t sure what style of dress I wanted. It was the only time myself and mum were able to go wedding dress shopping together.

“But I didn’t manage to find a dress that day with mum and I ended getting it in Melbourne where I went shopping with some close friends that I had met over there.

The beautiful ceremony conducted by Father John McCallion and Father Forbes was an emotional time for the bride, “It was strange the whole run up to the wedding I didn’t feel emotional at all but walking up the aisle it finally hit me. The song that was played was beautiful too – it was an instrumental version of A Thousand Years.

“Up until that point everything was relaxed,” Megan explained, “I had actually been calm enough do the chief bridesmaid’s hair and even ended up arriving too early at the Chapel.”

Dancing the night away to music by This and That, the couple enjoyed spending time with family and friends before jetting back to Melbourne nine days after the wedding.

And now the new Mr and Mrs Hollywood are looking forward to enjoying a honeymoon cruise to the Pacific Islands at Christmas time.

Photographs by PG photography and video