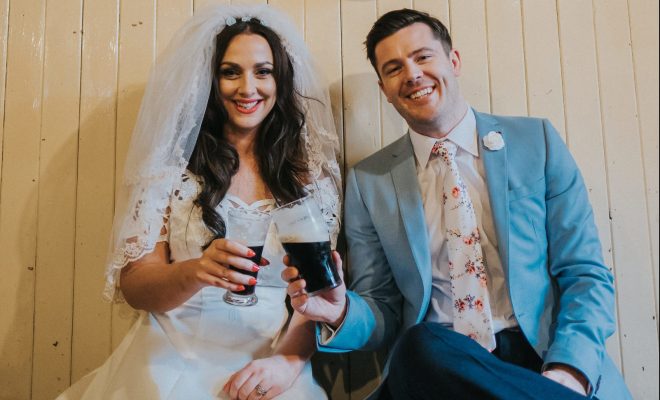 Ann-Louise and Eugene enjoy a beautifully vintage wedding in Drumragh

The bustling city of Las Vegas has held many special memories for Ann-Louise Bresnahan and Eugene Kerlin over the years. It has also always been one of the couple’s favourite places to visit, so it was only fitting that when they became engaged it was by Las Vegas’ beautiful Bellagio fountains, while ‘Your Song’ by Elton John played in the background.

With their loved ones surrounding them, the pair were wed at St Mary’s Church, Drumragh on August 28, 2017 in a traditional ceremony performed by Fr Sean O’Donnell.

Their wedding reception took place in Castle Leslie Estate, Monaghan – a place the couple describe as ‘magical’ and chose due to its stunning scenery, history and unique character present in every room.

The new Mrs Ann-Louise Bresnahan-Kerlin and her father, Anthony Higgins.

Ann-Louise, who is the owner of vintage clothes store Rustic Runway in Omagh, first met Eugene, a digital media officer from Aughnabrack, on a night out in Sally’s in 2009.

The fashionista spotted Eugene out of the corner of her eye while chatting with her cousin, and she couldn’t help but think about how handsome he was. “I must have been staring at him quite a bit as my cousin ended up making me go over to say hello, and after that the rest is history,” Ann- Louise reflected.

“Eugene is a really good guy, and I love that he always makes me laugh. I think in such a serious world, it’s important to have someone in your life that knows how to make you smile. I also love that we have our own interests but are similar enough to have lots in common.”

Together for just under seven years, it was on July 1, 2016 when Eugene proposed to Ann-Louise in Las Vegas – a place where they were spending a few days as part of their holiday to America. “It was a really hot evening and I kept telling Eugene to take his suit jacket off,” Ann-Louise reflected. 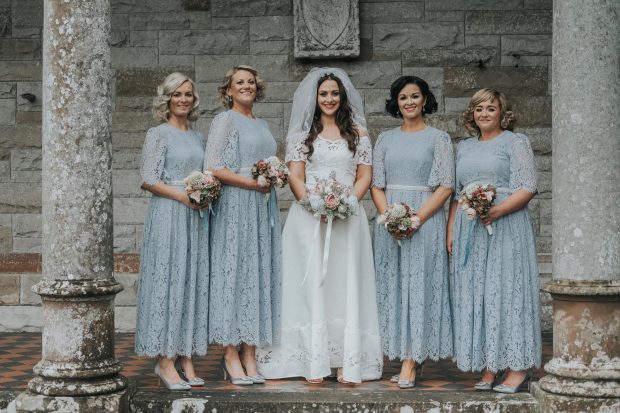 “We were due to meet our other friends at the Bellagio fountains for dinner, so we were watching the fountain display while we waited. “Then I felt a tap on my waist, and I turned around to find Eugene on one knee proposing.” Eugene then presented Ann-Louise with a platinum original 1920s ring featuring sparkling diamonds and sapphires – and Ann-Louise absolutely loved it.

“It was an amazing moment and of course our friends were hiding in the background watching,” she continued. “They even managed to video the moment. There were lots of other people around us, and they were congratulating us too. It was amazing to have our friends there as we were able to head off to dinner and celebrate.”

When the pair returned home, they began planning for their big day straight away as they had their hearts set on a Summer wedding the following year. “I then picked a colour scheme reminscent of Summer and one that would mix in with my vintage decorations,” Ann-Louise said. “I wanted to keep our wedding fairly traditional, and we made choices that reflected our personalities and tastes.”

As Ann-Louise is the owner of a vintage clothes shop, the Omagh woman naturally wanted to wear a vintage wedding dress. She ordered one dress from her shop’s supplier, and happily when it arrived, it fitted her like a glove. The ivory gown featured an off-the-shoulder design, cut-out detail along the hem and a cute bow at the back with a flowing train.

When Ann-Louise arrived at the church for the day of her wedding in a classy Rolls Royce with her father, she described how the rain poured heavily from the heavens. “Even when I was in the chapel, I looked out at one point and thought it was snow as it was coming down so heavy,” Ann-Louise said. And while she was a little nervous at the start, the service proved to be both incredibly emotional and very special.

“My Mum passed away just over two years ago, and it was very difficult getting married without her there,” she described. “But it was also a wonderful feeling having your closest friends and family around watching you marry the love of your life.

“Our priest, Father Sean O’Donnell made the ceremony very special for us, and my lovely talented friend, Sinead Taggart sang songs which I had specially chosen and that were special to me.”

The 34-year-old concluded, “Our wedding day went better than I could ever have imagined. We were both blown away by everything, and it’s true what they say: it definitely is one of the best days of your life. “It also goes by so quickly, so my advice would be to sit back and soak it all in together.” 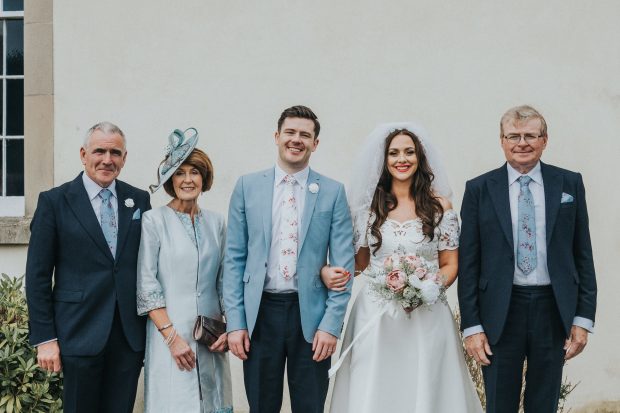