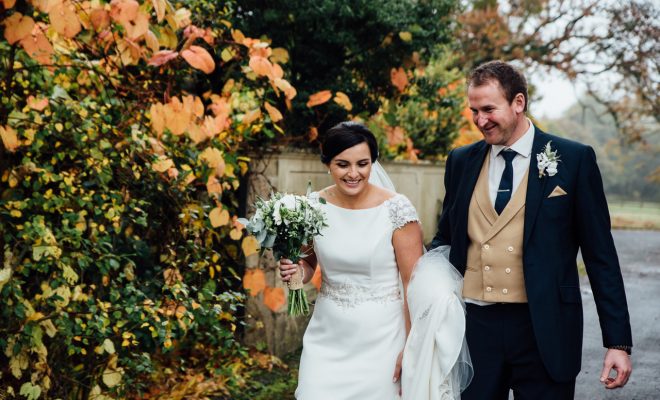 Beautifully rustic and emotional wedding for Laura and Adrian

They say first impressions last a lifetime, but that is certainly not the case for newlyweds Laura Grey and Adrian Millar. The pair quite literally ‘bumped’ into each other for the very first time in the Silverbirch Hotel on December 23, 2015 – and Laura recalls telling the Newtownstewart man to “clear off” as she felt that he was a “chancer”!

Thankfully though, Adrian refused to give up and once he got the Dromore woman’s mobile number, the pair began dating just a few days later – and they are now a happily married couple.

The new Mr and Mrs Millar were wed on October 14, 2017 at Dromore Presbyterian Church, in a traditional ceremony performed by Reverend John Hanson. Fittingly their wedding reception was also held in the Silverbirch Hotel in Omagh – a place they chose due to its ‘understated and beautiful’ décor in the new function room, and its convenient location for family members. 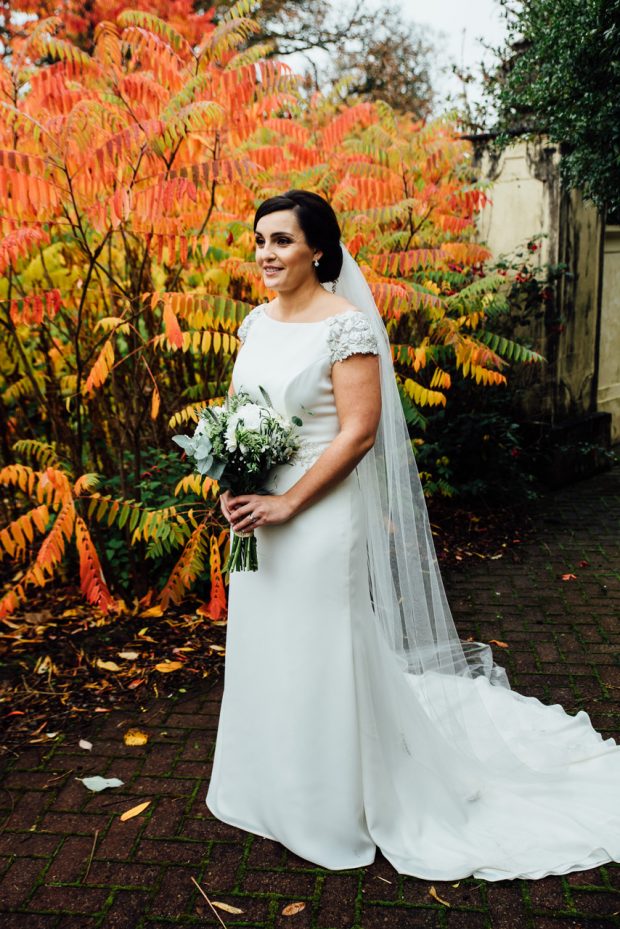 It was on October 8, 2016, that Adrian – who works for a Scottish company called ‘Blue Machinery’ – proposed to Laura while she was on a special trip to Caledonia to visit him. “Adrian works in Scotland from Monday to Friday and comes home every weekend,” said the special needs classroom assistant. “But I sometimes fly over to him to spend the weekend in Scotland, and on this particular occasion we had planned to visit Loch Ness.”

Taking a romantic boat trip from the famous lough to Urquhart Castle, it was just after the pair had finished their tasty picnic of Laura’s favourite foods and were exploring the ruins of the castle, that Adrian got down on one knee and presented Laura with “the most beautiful ring” she had ever seen.

“I was totally shocked,” Laura reflected. “I had not expected to be proposed to that day at all. “However,” she added. “We had been to look at rings a few months prior. “I had picked out what I liked, and of course I tried to push for a bigger diamond, but Adrian being a farmer put the foot down, and said ‘no’.

“He sent me off round the shops in Stirling, but he went back to the jewellers and bought the ring with the bigger diamond! “However, he told me that he had fallen out with the man that owned the jewellers over the price – a completely believable story coming from Adrian – and said that I could pick a ring somewhere else, to which I said ‘no way’! “That was the last I heard of rings until he was down on one knee.” 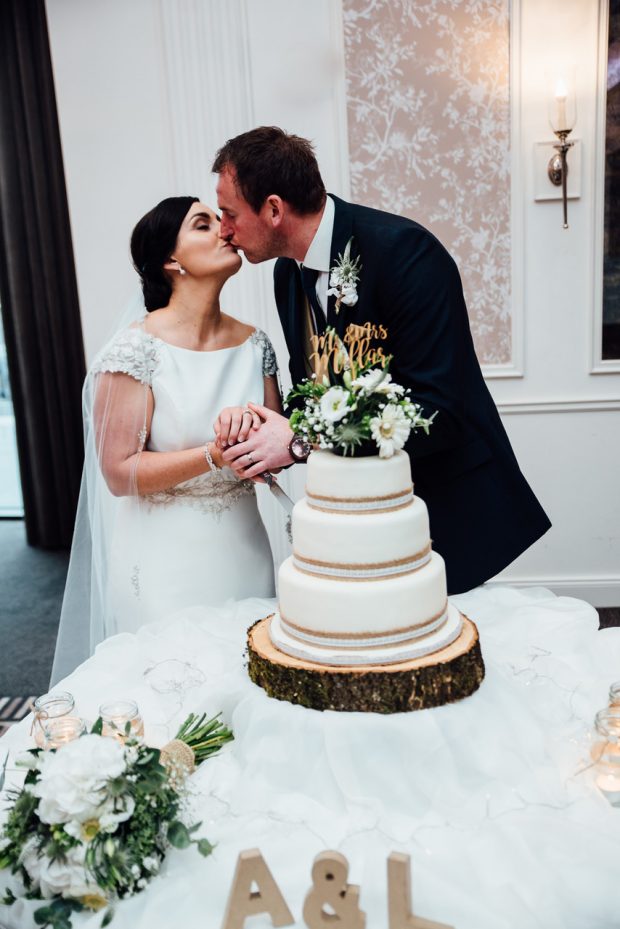 The newlyweds, Laura and Adrian Millar share a kiss before tucking into the gorgeous three-tiered cake that the talented bride baked and decorated.

After letting her minister know of their engagement, the pair began planning for their wedding. “I knew I wanted everything to be kept quite simple and didn’t want lots of fuss,” Laura described. “I love all things rustic, wooden and natural so I went with that theme throughout the whole wedding, and we kept everything traditional.”

However, while Laura wanted shopping for her wedding dress to be “simple and straightforward” the tough task proved to be anything but. “I knew what I wanted and just could not find it,” Laura said. “I went to a total of ten shops before I found the one. “Everyone kept saying that ‘you will know the dress for you from the minute you out it on’. But I was convinced that the one simply did not exist for me.”

The tenth and final dress shop that Laura tried was ‘Serendipity’ in Fivemiletown. And ironically, the Dromore woman almost didn’t go as she was at the point of giving up, until she was convinced otherwise by her mother, Myrtle and Adrian’s mum, Avril. However, her search for the perfect dress was complete when she tried on a classy-yet-simple ivory number, featuring feminine beaded shoulders and waistband with a low back. “The lady in the shop hadn’t even zipped it up and I knew it was the dress for me,” Laura recalled. 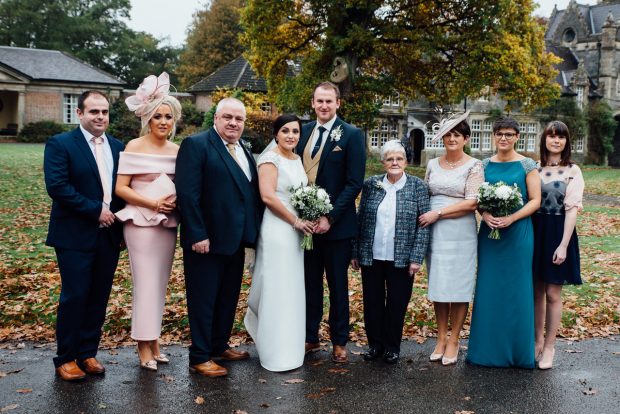 When her big day finally arrived, Laura described feeling “very cool and calm” – something she admits is quite unusual for her as she has a tendency to panic, particularly when it comes to punctuality.

“I like things to run on time, and I like to be early for everything,” Laura explained. “I was afraid I would arrive at the church before Adrian as he is late for everything. “However, everything ran smoothly and our church service was just lovely.

“Coming into the church, I was very emotional and I had to try very hard not to let tears slip out. When we started to sing our first hymm, I had to take the order of service out of Adrian’s hands as I could not see the words because he was shaking so much from nerves. “But we had picked hymms that we both love and the minister did a great job of the marriage ceremony.”

The 29-year-old concluded, “From start-to-finish, our day ran according to plan, and we were both so happy to hear all our guests talking about what a great day they had too. “Adrian and I both said at the end of the day if we are married and everyone had enjoyed the day then we had succeeded.” 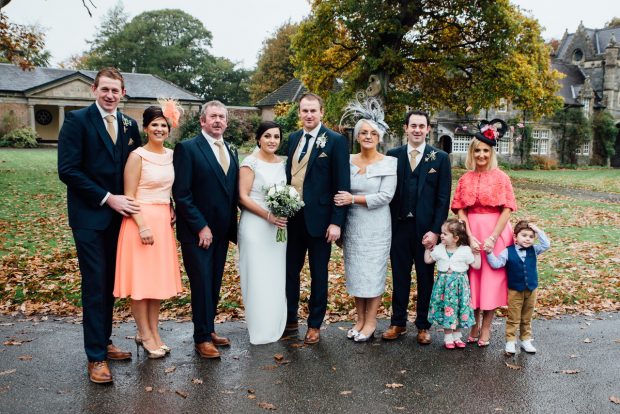 Newlyweds, Laura and Adrian Millar alongside their loved ones on their autumn wedding day.