The rustic beauty of nature was on full display during the wedding day of Leona Pearson and Fáelán Duffy – and there was even a little sprinkling of Irish rain for luck too!

Deep-coloured forest flowers decorated the church, while Leona’s bridesmaids looked lovely in green gowns, their venue was situated in the heart of the countryside and even the newlyweds’ delicious wedding cake was designed to look like a tree stump.

Surrounded by their family and friends, Leona and Fáelán were wed by Father Michael McCaughey at St Mary’s Church, Killyclogher on March 2, 2019. Chief bridesmaid on the day was Danielle Pearson (sister-of-thebride), and bridesmaids were Chloe Pearson (sister-of-bride) and Caoimhe Colton (bride’s cousin). Best man was Lorcan Healey, groomsmen were Cathal Skelton and Oisìn Duffy, while the ushers were Cú Mhara Duffy, Aimhirgin Duffy and Murchadh Duffy. Oriana Duffy and Searan Duffy were flower girls, while page boy was Alex John.

The newlyweds celebrate their wedding alongside loved ones.

The new Mr and Mrs Duffy’s wedding reception took place at Farnham Estate Golf and Spa Resort, a nature retreat set amidst 1,300 acres of land on the outskirts of Cavan Town. Leona, a renal nurse from Omagh, first met Fáelán at the Omagh Leisure Centre in the summer of 2009. “Fáelán worked there, and I volunteered to help teach Special Olympic swimming training,” said Leona. “His looks attracted me, and his intelligence and humour kept me.”

The couple were together for approximately nine years before the Omagh man asked Leona for her hand in marriage in truly romantic fashion on April 9, 2018 – and Leona remembers the special occasion as if it were yesterday. “Fáelán put together a treasure hunt with rhyming clues that led to places that were significant to us both throughout our relationship, like a trip ‘down memory lane’,” she recalled. “This culminated in a surprise trip to the Radisson Blu in Sligo.”

Fáelán then sprung a final clue on Leona during a walk along the beach at Rosses Point. “I was looking out to the sea and when I turned back around, Faelan was down on one knee,” Leona added. “I was shocked, but there was a sense of relief because he had taken his time about the whole thing! “I was starting to think he didn’t have it in him.” 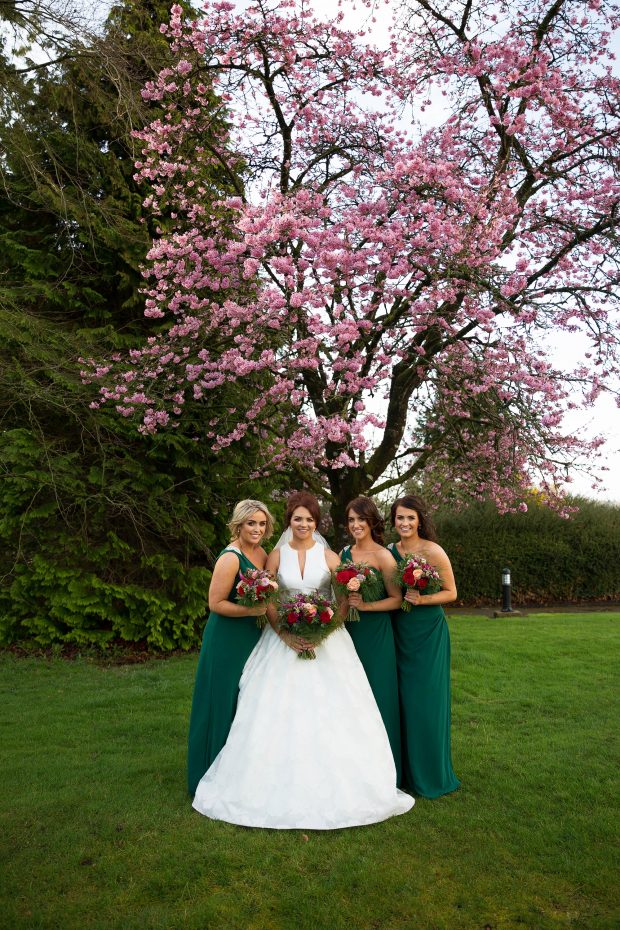 In his hands, Fáelán revealed a yellow gold ring, with a sparkling diamond cluster in the centre, betwixt sparkling diamond shoulders. “I loved it,” Leona smiled. “It’s not something that I had ever thought about because I seldom wear jewellery, but I loved it as soon as I saw it. “He told me that he had changed his mind about the style three different times, but I’m glad he settled on this one.”

Leona took the lead on the wedding planning, and got stuck into the task straight away. And while the pair visited many venues, they both fell in love with the Farnham Estate in Cavan straight away. “The venue was absolutely stunning,” Leona said. “We couldn’t picture ourselves getting married anywhere else. “The hotel is designed around an estate in the countryside and it perfectly captures the balance of a stylish and unique wedding venue, along with the practical comforts that a hotel brings.”

Leona added, “Initially, we tried to steer away from the traditional Irish wedding, however I soon found myself getting sucked into the grandure of it all. “It’s hard not to get swept away with all the ideas that you see in wedding fares and pinterest, for example. After all, you only do it once.” The only element that Leona knew that she wanted from the very beginning was to have deep-coloured forest flowers and for her bridesmaids to wear ‘hunter green’ gowns. “I tried to introduce elements of a rustic theme as both Fáelán and I love that style,” Leona said.

Leona said that the idea of wedding dress shopping was daunting as she ‘doesn’t like clothes shopping in general’. However, upon visiting shop number three, McElhinney’s, Ballybofey, Leona said ‘yes’ to an ivory ball gown that she simply knew was the one. “I went looking for a dress that I had pictured in my mind: a ‘bohemian style’ number with long sleeves and straight,” Leona relfected. “However, I found that this style didn’t suit me at all. I tried a few different styles, and found myself gravitating towards a single style of dress which I ultimately chose.” 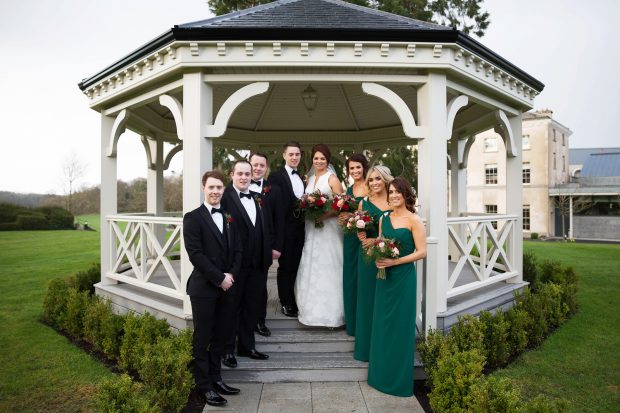 This chapel-length number featured a sleeveless design, with a pretty structured notch collar, practical pockets and a delicate floral pattern which added character and exuded femininity. “I knew it was the one for me as soon as I put it on, even though it was something that I would have never picked out originally,” Leona said. “I felt really comfortable in the dress which was a big must for me, and I added a sequin embellished waist belt to complete the design.”

On the morning of her big day, Leona understandably described her emotions being ‘all over the place’. “I started off feeling quite calm, but in the blink of an eye, I had my dress on and was getting into the car bound for the chapel,” Leona said. “I was extremely nervous, but the nerves brought with them a equal sense of excitement.” The beautiful bride travelled to St Mary’s Church in a vintage style car, while her bridesmaids travelled in a limousine, and Fáelán was chauffered to the Killyclogher chapel by his father, Tony via a convertible Mazda.

Leona received quite the surprise as she walked up the aisle to a rendition of one of her favourite songs, ‘The Reason’ performed by none other than Fáelán. “My bridesmaids were in on it, and one of them, Caoimhe Colton walked up and joined Faelan in singing me up the aisle,” Leona said. “Thankfully that seemed to take a bit of the pressure off me, as it was quite scary walking in front of all your family and friends. “The rest of the music at the ceremony was played by Edward Bryne, Eolann Duffy, Conal O’Kane and Padhraic Colton who Fáelán knew from singing together in the Scór. “Thankfully our priest really made us feel relaxed, and it seemed to be over in a blink.

“Our wedding was perfect,” the 28-year-old concluded. “We couldn’t have asked for a more amazing day, and to be surrounded by friends and family meant everything to us. “Everything went off without a hitch and I didn’t want it to end!”

Everyone having the craic on Leona and Fáelán’s wedding day.