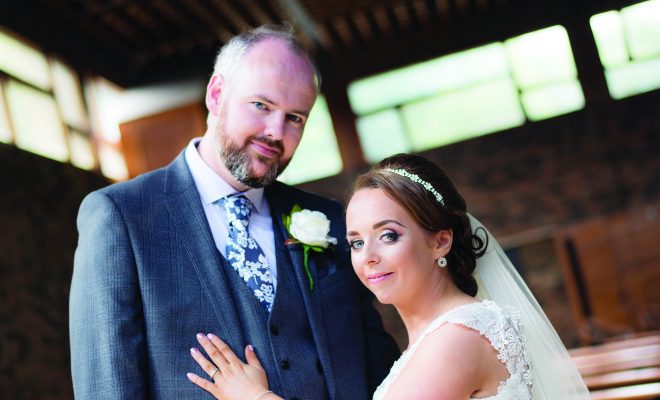 A Summer wedding with loved ones, emotional moments and personal touches gave Bernadine Arnold (née French) the perfect day she had always dreamed of. The Strabane woman and Damien Arnold were wed by Fr Michael Doherty in a traditional ceremony at St Mary’s Church, Strabane on June 3, 2017.

Their wedding reception took place in the Fir Trees Hotel, Strabane – a family-run hotel surrounded by a wealth of beautiful trees and famous for its good food and friendly service.

“People say that opposites attract and that’s certainly the case with us,” Bernadine said. “Damien is definitely the calm, easy-going influence in our family. He is always there when you need him.”

The pair worked together for a number of years before they started going out – but the Strabane woman admits that even as colleagues, there was always a spark between them. “It took a while and a drunken night for us to admit we both had feelings for each other,” she laughed. “We started officially dating after that, November 14, 2009.” 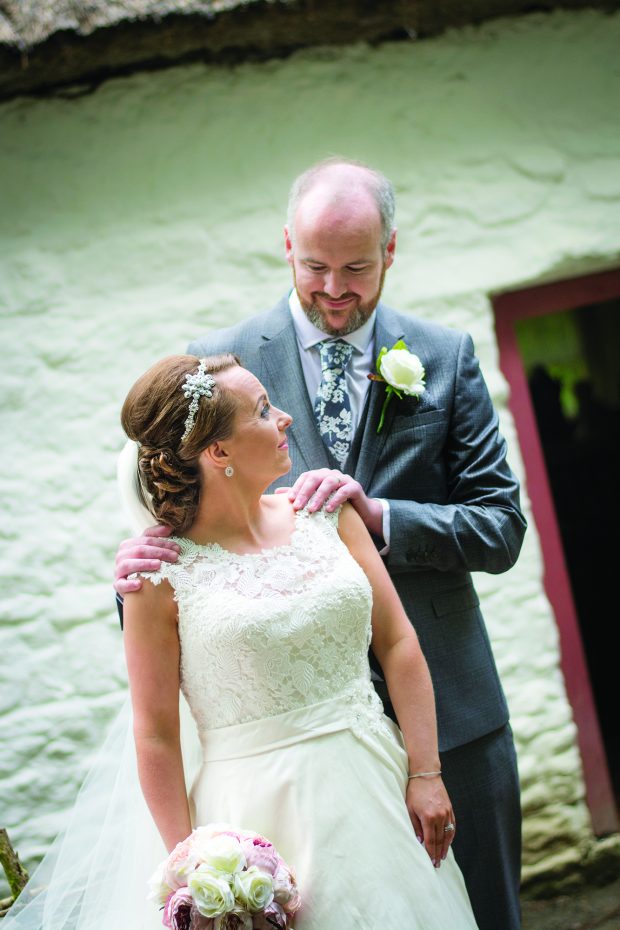 Bernadine and Damien enjoying their wedding day at the Ulster American Folk Park.

Together for more than six years, it was on Christmas Eve 2015 that Damien surprised Bernadine with a romantic and unexpected proposal. “It is tradition in our house at Christmas, that we exchange gifts on Christmas Eve night after the kids have gone to bed,” Bernadine explained. “The next morning is all about the kids, so we take time with each other to open our gift.

“We had done all the opening, when Damien announced that he had forgotten one of my gifts in the kitchen. He appeared back in with a little box and got down on one knee.” Inside the dainty box was a sparkling white gold band with a single stone in a square setting which the Sion Mills man had chosen himself. “To be honest, at first I thought he was joking,” Bernadine admitted.

“We had talked about getting engaged and married for so long, that I didn’t believe it was actually happening. It was very emotional.” Bernadine added, “The ring was so stunning and elegant. Damien picked it himself without any help, which I think made it even more special.”

Bernadine and Damien look smart on their wedding day.

The couple celebrated their exciting news with their family on Boxing Night, and then got stuck into planning for their big day during the Christmas holidays. “I suggested a June 2017 wedding, and then within two weeks, I had all the major wedding items booked,” Bernadine said. “I was definitely the girl who had been dreaming of her big day for years. I had a good idea of what I wanted, and Damien was happy to go with the flow. “I definitely wanted a traditional day with a lot of personal touches. It was very important that it was about us as a family.”

For Bernadine, it was the local location of the Fir Trees Hotel, Strabane and its friendly staff that set the wedding venue apart from the rest. “We knew the venue well,” she described. “We knew some of the staff there and we knew they served good food.”

Bernadine described feeling “so excited” about wedding dress shopping, and quickly found her perfect gown in Ultimate Dresses, Dungiven. It featured a lace top, a girlie full skirt of raw silk and a long train with pretty buttons which ran the whole way down the material. 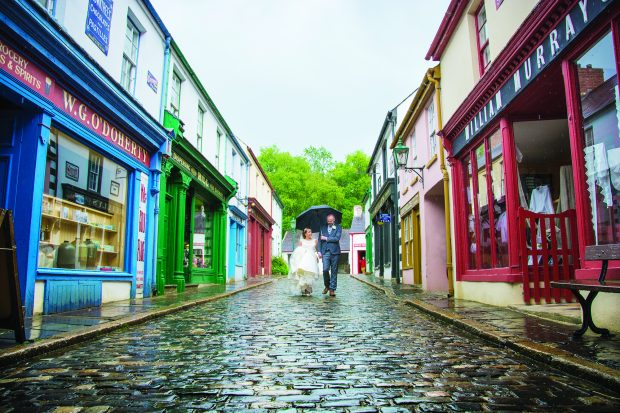 The newlyweds take a stroll through the Ulster American Folk Park on their Summer wedding day.

When Bernadine’s big day finally arrived, she recalled feeling excited but at the same time, the nerves had hit her “big time”. And when she walked down the aisle with her father, Edmond, towards Damien she struggled to keep herself together.

“As I was the last girl to get married out of the house, emotions were definitely high,” Bernadine said. “The music also caused a few tears as the hymns sung by Niall Donnelly and his sister Bronagh were simply stunning.”

She added, “But our service was very personal to us, which is exactly how we wanted it. Having our eldest son, Connor bring the rings to the altar was also a high point, and of course reciting our vows to each other.

Our wedding day was absolutely perfect for us – we had our perfect family day,” the 30-year-old concluded. “There was great food, fantastic entertainment throughout and perfect company. We definitely couldn’t have asked for better.”