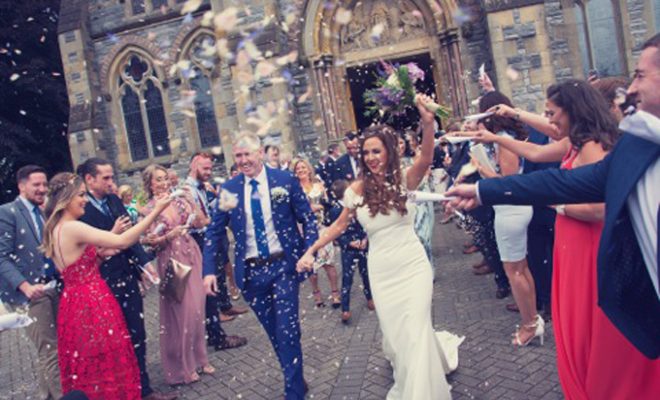 For Kelly Doherty and Paul Connolly, it was simply love at first sight. First meeting in a bar in the summer of 2010, the pair were instantly attracted to each other and love quickly blossomed in the months that followed.

Exactly six years to the day of their first date, the couple were wed at the Church of the Immaculate Conception, Strabane by Fr Declan Boland on August 5, 2016. “I was instantly attracted to Paul and we had such a laugh, which made it very easy to spend time together,” Kelly reflected.

“As I got to know Paul a bit better, I could tell that he was a very caring person and everyone that speaks about him have such great things to say about him.” It was during a romantic trip to Cornwall in July 2014 – a place where Kelly had fallen in love with the previous year – that Paul surprised his love with a romantic and well thought-out proposal.

“Paul started planning his proposal back in January 2014,” Kelly (31) explained. “When we arrived in St Merryn in Cornwall we set the tent up and drove straight into Padstow. I had worked two jobs that year, so Paul said he had booked Rick Stein’s seafood restaurant as a surprise for me for working so hard. I was extremely excited.”

That night during dinner, Paul handed Kelly a mysterious piece of paper – revealing a map to the B&B he had booked for the next two nights in Padstow. “People asked me if I was suspicious at this point but I really wasn’t as we had just bought our first home together a week before,” Kelly said.

“Paul had been surprising me with trips away before also, so this wasn’t out of the ordinary.” After a romantic stroll across a glittering nearby beach, the pair from Strabane returned to their beautiful room at the Old Ship Hotel – and their lives were about to change after one simple question. 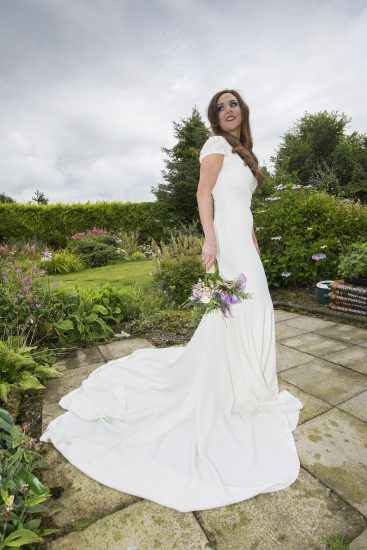 The new Mrs Connolly, holding her
bouquet of flowers featuring some cut from her father, Paddy’s garden.

“I was sitting on the bed, and when I looked around Paul was down on one knee!” Kelly smiled. “I shot across the bed and started crying. I have never been so shocked in all my life! I said yes when I found the power to speak again.”

He presented her with a glittering rose gold, single diamond ring – a perfect match for the wedding ring that Kelly’s grandmother had left to her. “It was as if my granny was there and helped Paul to choose the ring that day,” she said. “It showed that he truly knew me and my style.”

Eager to begin planning for their modern wedding, the couple’s first stop was securing a venue for their big day. Not a tough task as it turned out, as when they visited The Beach House in Buncrana, its breath-taking views of Lough Swilly captured both their eyes and hearts.

The blushing bride-to-be had a clear view of what she wanted her wedding dress to be – something effortless and not too fussy – but it took months of internet searching to find the right gown. However when she stumbled across the Atelier Pronovias collection, she was delighted to finally find the one.

“It was fitted, with only a bit of detail on the shoulders,” Kelly described. “It had a V at the front and back and was mermaid shaped at the bottom. “Not very many people stocked it in Ireland but finally I found La Boda Bridal in Banbridge. As soon as I tried it on I loved it. We put a deposit on that day.”

Kelly and Paul decided to stay in the house together the night before they were wed – despite people thinking they were ‘mad’ – but the 31-yearold said that they wanted their wedding to be different from the norm. So much so, that even the newlyweds’ wedding ceremony finished with a unique twist.

“Instead of us leaving first, we had our guests go outside and line up with confetti,” Kelly described. “Then we left to an instrumental of ‘Bitter Sweet Symphony’ by The Verve, which is one of our favourite songs.

“Our wedding day went so well and way too fast,” Kelly concluded. “I think the key is to stick to what you both want from the beginning – even when you think it might be too different. Paul and I are so happy with how our entire wedding weekend went.” 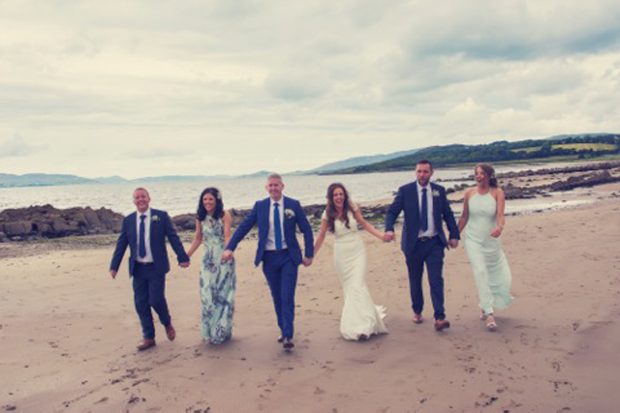