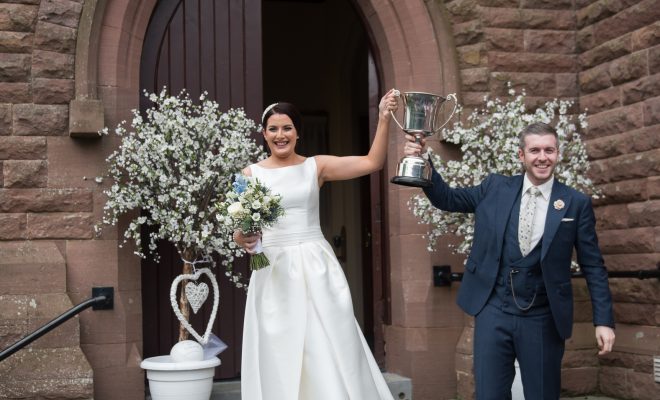 Best friends tie the knot in their beloved hometown of Plumbridge

Orla Harkin and Noel O’Kane have known each other all their lives. Not only did the pair live on the same street as each other as children, they also attended the same primary school and shared a wealth of special memories across their teenage years.

So when Noel asked for her hand in marriage during a romantic winter holiday to New York on Thanksgiving Day in 2014, Orla simply knew the only answer was ‘yes’.

The pair, who are both from Plumbridge, were wed by Fr Brian Donnelly and Fr Peter O’Kane at the Sacred Heart on September 2, 2016.

“It definitely wasn’t love at first sight for us,” Orla laughed. “Seeing Noel block a football in primary school to save my face was not the prettiest sight… his arm was broken as a result! “Our first date wasn’t until about 2007 when we went for pizza and then onto the cinema. “We were going out seven years before Noel proposed,” she added.

“We had discussed getting engaged, but the usual with Noel is that it goes in one ear and out the other and he made his own plans.” “In April 2014, we booked to go to New York near the end of that year, and on November 27, 2014 he produced the ring. “The cold weather ruined all his romantic plans but he eventually got down on one knee!” she smiled.

When Orla was presented with the sparkling white gold band, she described feeling a mixture of “disbelief, surprise and excitement.”

“My engagement ring was beautiful,” she said. “I couldn’t believe Noel picked it himself. “However, I was also worried about what my parents and siblings would say given that my brother Seamus proposed in September 2014, my sister got engaged in October 2014 and then I had got engaged in November 2014!”

Eager to begin the wedding planning after Christmas, in January 2015 the newly-engaged couple started to book everything from the cars to the videographer and wedding band.

However, there was only one venue that they had their heart set on – the Clanree Hotel in Letterkenny. “The first wedding we attended as a couple was at that hotel back in 2007, so it was nice to get married there,” Orla explained.

“Also the new banqueting room is fantastic, and the staff, especially Antoinette and Annette, were so easy to deal with and nothing was ever a problem.” 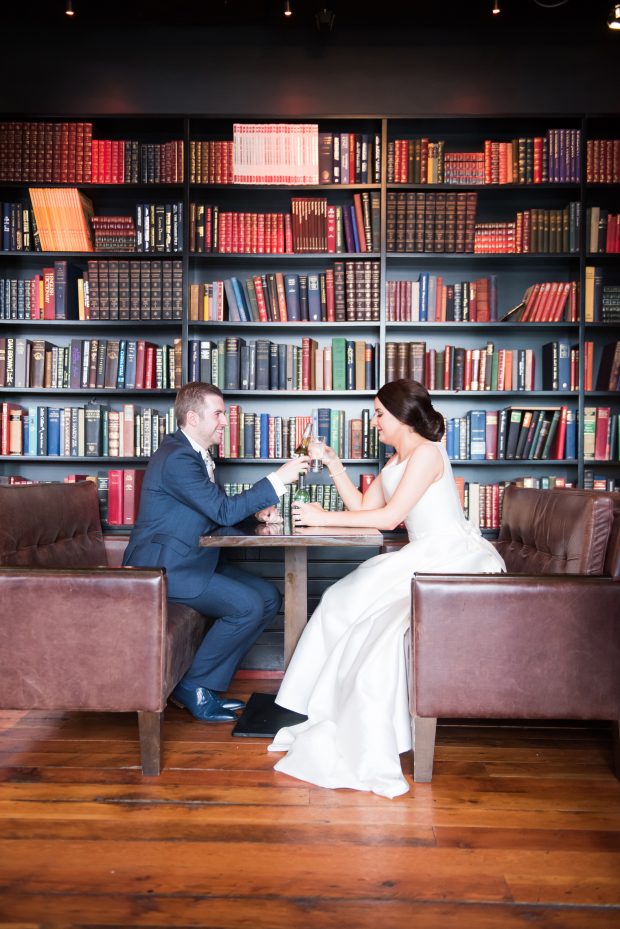 While Orla wasn’t entirely sure of what wedding gown she wanted for her big day, the staff of Perfect Day in Lurgan helped her find the ideal dress.

“The dress I chose was a plain ivory silk dress with a detachable skirt,” Orla described. “Its belt had a small bow at the back. The designer was Margarett. “I loved it, and once I tried the dress on I knew it was for me.”

Feeling “surprisingly calm” on the morning of her wedding, Orla said she was simply just looking forward to the day ahead.

“Our service was just beautiful,” Orla reflected. “Our parish priest, Fr Brian Donnelly and Noel’s cousin, Fr Peter O’Kane, were both great and made us feel at ease. “Noel also sang my mother and the bridesmaids down the aisle. I guess hearing him sing made me feel a bit nervous as I waited for him to finish, but other than that I was still calm and excited at the same time.

“Noel also surprised me at the reception with video messages from friends and family who were away from home and who couldn’t attend the wedding. “At the end, a message from Shane Filan played which made the day even better!”

She added, “Our wedding cake was made by Helen McGlinchey who is unbelievably talented. It was a plain four-tiered cake consisting of fruit, chocolate, lemon sponge and raspberry and white chocolate.

We also had a small football cake in our club colours to mark our keen interest in football.” Orla concluded, “The cliché is that it is the best day of your lives but it really is. It went so quick but we had a blast!”