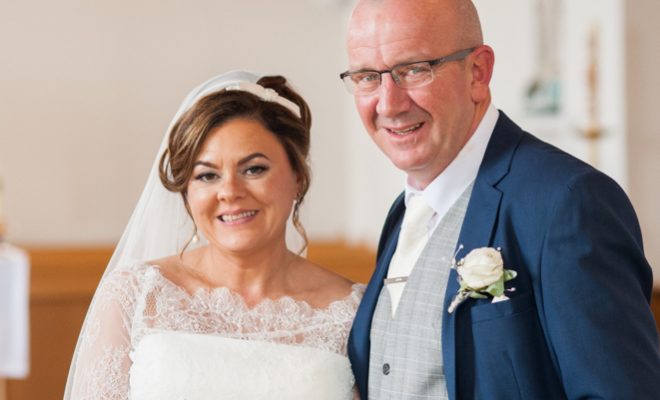 A romantic proposal on a sparkling Turkish beach transformed into a beautiful wedding laced with personal touches for newlyweds, Clodagh Murphy and John Fleming.

The couple were wed by Monsignor Joseph Donnelly at St Mary’s Church, Drumragh on July 11 this year. The pair first met in May 2008 when they were attending a family barbecue – and their friendship soon developed into something more when they realised they had so much in common.

“We both clicked right away,” Clodagh smiled. “We just got on really well together, and we became really good friends.” It was when the pair were together for six years, that John surprised his love from Omagh with a proposal while on holiday in Marmaris, Turkey.

Standing on the port town’s sandy beach, with its blue ocean in the background, John (40) got down on one knee and asked Clodagh (41) for her hand in marriage. He presented her with a beautiful white gold diamond-encrusted engagement band, which featured a stunning square diamond in the centre.

“I was so surprised when he proposed!” Clodagh laughed. “He had to ask me twice as I was stunned. But of course I was delighted, and my ring was gorgeous.”

Eager to plan for their wedding straight away, Clodagh, who is a receptionist and a youth leader, took to the quirky internet website Pinterest to gather ideas.

“I always knew I wanted to incorporate pastel colours into my wedding because they are so pretty,” Clodagh reflected. “And I chose peony roses for my bridal bouquet as I’ve always loved them.

“While I wanted a traditional wedding Mass, I wanted our wedding band, who played at our reception, to add a more modern element to the day.”

Describing wedding dress shopping as “a great part of the day,” it was in Bridal By Seven in Newry that Clodagh found a wedding dress that perfectly suited her.

Her elegant white Rosa Clará designer dress featured a detachable lace top, and tulle at the bottom. “I loved it, and felt so glamorous wearing it,” Clodagh said. “My mum, Teresa, daughter Megan, sister Karen and niece Estelle helped me pick it out.  Bridal by Seven was the fifth shop I visited, and every dress there was just beautiful.” 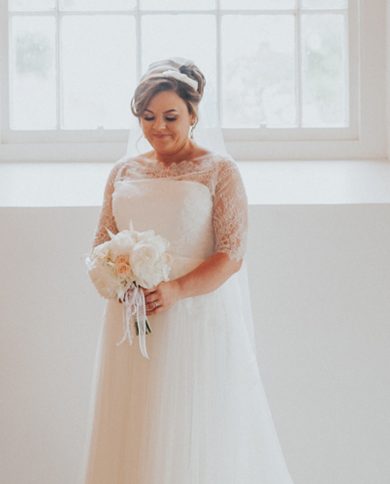 Clodagh chose the Villa Rose Hotel in Ballybofey for her wedding reception due to its accessible location and pretty private gardens which were perfect for photographs.

“The hotel was stunning, and the location was not too far for people to travel after the service. John and I also admired its quality of food and exceptional service by wedding co-ordinators, Rhonda and Shannon.”

When Clodagh’s big day finally arrived, she described feeling calm, however admitted that John, who is from Fintona, had a few butterflies in his stomach! “But once the wedding Mass started, we were so happy and took all of the atmosphere in,” she said. “Monsignor Donnelly made us feel very relaxed.”

The newlyweds, who chose each hymn for their service, were also treated to a special rendition of ‘Pie Jesu’ by their 11-year-old niece, Sorcha Haughey. “The singing was absolutely beautiful as were the vows we made,” Clodagh beamed.

“A close friend of mine, Aine from ‘Crafty Chick’ helped add a lot of personal touches to the chapel as well. “She made me signs which said, ‘Today I marry my best friend’, and ‘Dad, of all the walks we had together, this is the one that I will remember forever’.

She added, “On the day, we were also very lucky that we enjoyed dry and sunny weather – although there was one wee light shower.” 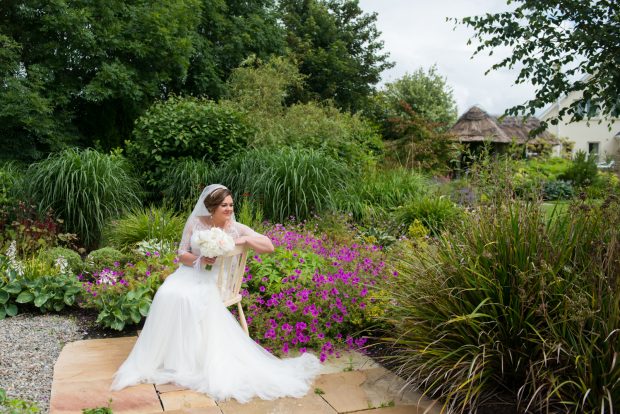 Clodagh is all smiles as she enjoys the pretty private gardens of the Villa Rose Hotel, Ballybofey on her summer wedding day

Whisked away to their wedding reception in a classy silver limousine, the pair were soon ready to tuck into their three tier wedding cake of three different flavours – carrot, red velvet and malteser crunch. “Our cake was plain but elegant,” Clodagh described. “And our cake topper was in the shape of a Ferrero Rocher which is our favourite chocolate.”

“Our reception also featured a ‘finger print tree’ where all our guests got to dip their thumbs in ink and stamp the tree which was a lovely reminder of our day.”

Then, the new Mr and Mrs Fleming enjoyed their first dance to the ballad, ‘If I Die A Happy Man’. Originally a song by Thomas Rhett, it was performed by live duo HYPE from Cookstown who kept the newlyweds and their 265 guests up on the dance floor for hours.

“Our wedding day was the best day of our lives,” said Clodagh, who is currently honeymooning in Cancum. “All the planning was worth it when everything fell into place, and it so was special to celebrate it with our family and friends.” 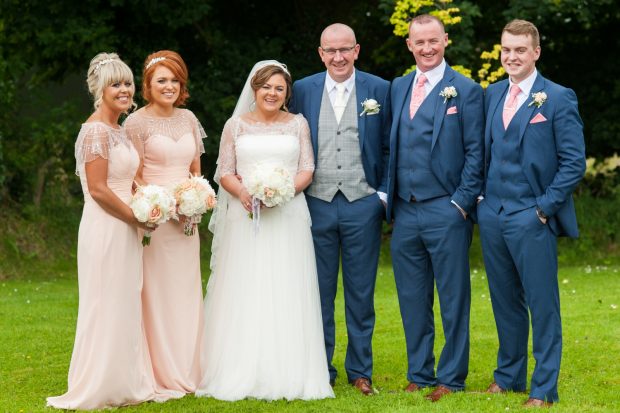 The newlyweds, Clodagh and John, alongside their bridesmaids, Megan Murphy (daughter of bride) and Estelle Finlay, bestman, Declan Quinn and groomsman, Conor Donnelly (son of groom).