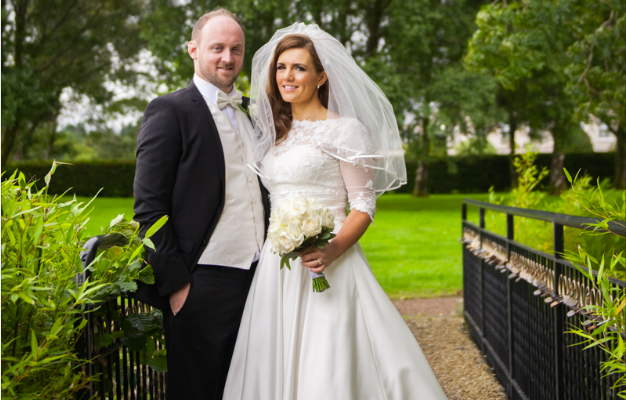 Bride goes with the flow after Caribbean cruise proposal

A romantic proposal while cruising around the azure blue shores of the Caribbean was perfectly transformed into a truly beautiful wedding laced with personal touches for Alice McDonnell and Tiernan McAleer.

The pair were wed on September 9, 2016 in Magheralough Chapel Trillick which is the hometown of the bride. And to make matters even more special, the ceremony was performed by Fr Ryan McAleer – who is Tiernan’s cousin.

Alice explained that the pair first met each other in Sydney, Australia at a small house party during the summer of 2010. “We’re both from here so it was such a co-incidence that we met on a random Saturday night in Australia!” she laughed. “But we clicked straight away, and I liked his sense of humour. 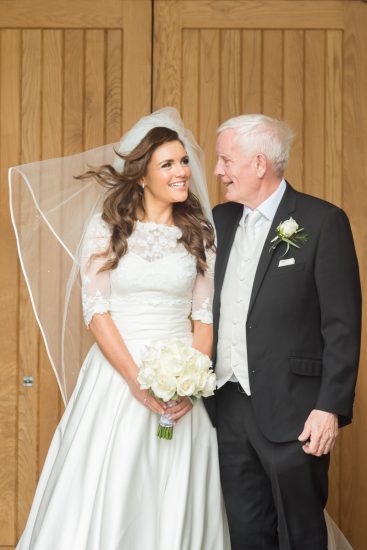 The blushing bride, Alice McDonnell and her father,
Charlie McDonnell are all smiles as they celebrate the day of the Trillick woman’s wedding.

It was attraction at first sight with us and soon we became very good friends.” Together for five years, it was in May 2015 that Tiernan (26) surprised Alice (29) with a unique proposal while on a scenic Caribbean cruise.

“He made me a photobook, with riddles written alongside the pictures,” Alice explained. “It contained photographs of both of us from the time that we met, right up until then.

“The book was class, and good to read. But when I got to the end, Tiernan told me that the book had one more page,” she added. “And he got down on one knee and said to me, ‘Alice, will you please be my wife?’ “It was a really emotional proposal, but also really exciting. I cried tears of happiness.”

Tiernan, who is from Galbally, then presented Alice with a white gold engagement ring, decorated with diamonds along the side and a large diamond in the centre. “It was beautiful,” Alice described. “The ring was just what I wanted.”

Eager to plan her wedding straight away, there was only one reception venue that Alice had her heart set on booking – and that was Harvey’s Point in Donegal. “The owners are good family friends of ours, so the place has been part of our family for years,” she beamed. “And everything about the reception was exceptional. From the planning to the friendly service, they made us feel like we were the only ones getting married there. They were excellent.” 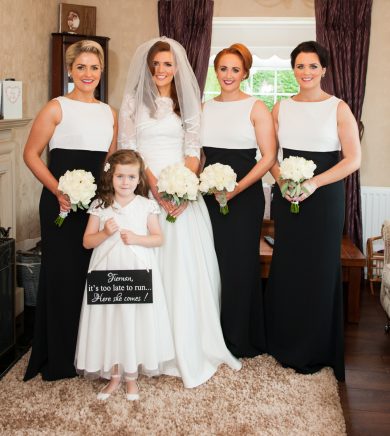 Hoping for a wedding that looked as equally classy as it did traditional, Alice picked out dainty black and cream bridesmaid dresses for her bridal party – and knew that any flower would be perfect for the day as long as it was cream-coloured. “I wanted everything to be kept very plain and simple, and I loved the idea of a cream colour-scheme,” she reflected.

With her mind set on going out for just one day to choose her wedding dress, it certainly didn’t take Alice long to find a gown that perfectly suited her tastes. Visiting The Wedding Centre in Randalstown, which Alice described as a ‘lovely place’, she chose a white gown which featured delicate laced sleeves and a skirt which fanned out at the bottom. “The dress wasn’t funky or quirky,” she said. “It had lace at the top and all the rest plain – but it was gorgeous.”

On the eve of her wedding day, Alice was in for one final surprise before becoming Mrs McAleer – her friends and colleagues in Stitch N Style gave her a surprise three-tier wedding cake of fruit, marshmallow and sponge. Featuring a man made from Ferrero Rocher and a woman made from marshmallows, Alice described its simple yet effective design as being ‘perfect’.

When Alice’s big day finally arrived, she said the weather was wet, stormy and altogether horrible – however that didn’t stop her from feeling completely excited to marry Tiernan. “I was just nervous that I wouldn’t be on time as we did have the worst weather in the world,” she laughed.

With Tiernan’s cousin, Fr Ryan McAleer performing the wedding ceremony, Alice’s cousin Ryan McLaughlin also had a special role to play during the service and wedding reception. “My cousin performed the music during the service and he sang the song for our first dance, which was called ‘Amazed’ by Lonestar,” Alice described.  “Having both of our cousins involved in our day, meant everything was much more personal and special for us.

“My wedding day was the best day of my life,” Alice concluded. “I realised that it was just best to go with the flow, and that’s exactly what I did. And I enjoyed every second of it.” 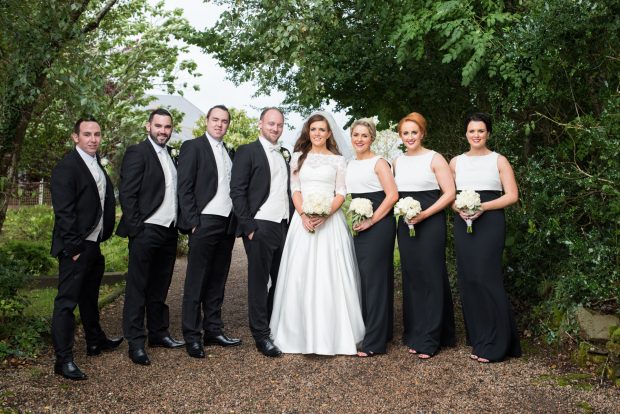