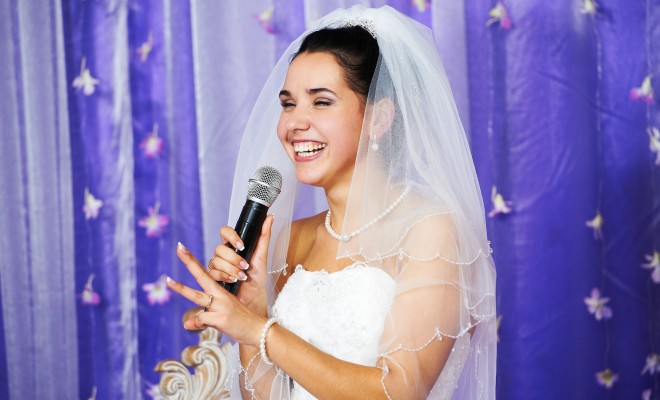 Should Brides Make A Wedding Speech?

Traditionally it’s the Groom, Best Man, the Bride’s father and the Groom’s father who deliver the speeches at the wedding reception, but we’re starting to see more and more Bride’s getting up to say a few words of their own.

Leantia Gallagher a Wedding Co-Ordinator at the Great Northern Hotel Bundoran, says “It’s becoming more common …but generally not always organised ..sometimes the sentiment of the day leads them to it!”

So what are your thoughts on this?

In a recent shout out to our social community we asked what you thought and we’ve received quite a few comments and messages, so thank you to everyone who engaged with us.

Here at North-West Brides we think it’s a great idea, but that’s not to say our opinions aren’t mixed.  It’s mainly an opinion divided by age and our own confidence in public speaking.

But let’s face it, why should tradition dictate whether or not a Bride can say a few words at her own wedding?  After all we have input into the Groom’s speech and they don’t always remember to thank everyone that we believe needs to be thanked!

Cora Mclaughlin a Bridal Consultant at Verona Bridal Magherfelt, says she loves hearing of their brides making speeches. “Yes yes yes!! If the bride is confident enough to do so its a lovely sentiment“.

So although our Grooms do a fantastic job, more and more brides are feeling the urge, whether pre planned or not, to deliver a speech of their own.

We recently spoke to two Brides who did just that.

Cheryl Briggs got married on July 16th, 2004, when asked why she decided to make a speech at her wedding she said, “I hadn’t really made up my mind to speak until we were sat at the top table at the reception!! I really really wanted to speak as a bride to break with tradition.  To thank those who went the extra mile for me, those who deserved a mention other than the usual suspects. My advice to any bride thinking about making a speech, would be to go for it, but please please prepare in advance as nerves could cause you to overlook the most important people there!!”

Catherine Healy, who got married on February 26th this year, was unsure whether to talk or not, but she chose to say a few words about her husband and also thanked everyone herself.  “I said a poem that I found years ago, I found the poem very fitting for the day…..everyone thought it was a nice wee touch….I felt that it would be nice for me to say something on the day. My advice to any bride thinking about talking, whether it’s a full on speech or what I did, just a few words and a poem, I would tell them to go for it….the guests find it nice and refreshing hearing the bride talk, even for a few seconds.”

So if you are getting married this year and are uncertain about making a speech at your wedding, take the advice of our North-West Brides community, “Go for It!”