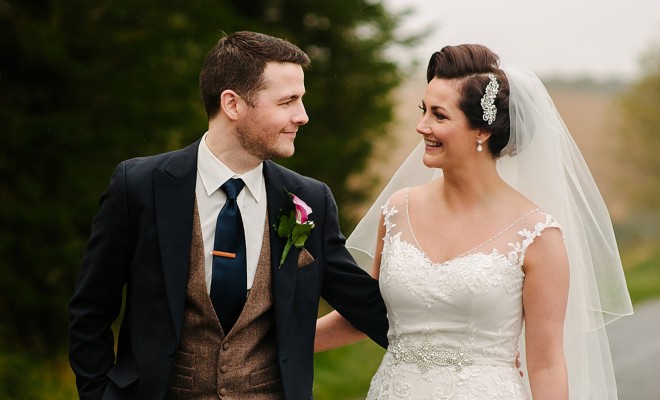 November 5 was certainly a day to remember for Greencastle woman Leanne Heggan as that was the date she first met her husband-to-be, Dominic McCann. 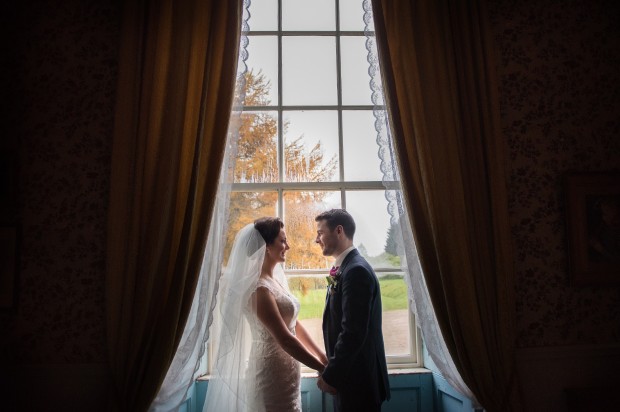 The newlyweds celebrate their wedding at the Greenvale Hotel, Cookstown.

After making eye-contact across Sally’s bar on a night out, they were “instantly attracted to each other”, and the pair have been together 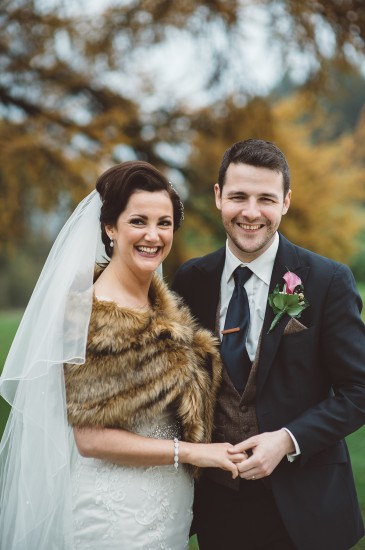 The new Mr and Mrs McCann are all smiles as they wed on an autumnal day.

ever since. Exactly five years later, the dedicated couple were wed by family friend Fr Francis Bradley in Our Lady of the Wayside Church, Broughderg, on November 5, 2015.

It was on the same day the pair received keys to their very first home together, late September 2012, that Omagh man Dominic (31) surprised Leanne (31) with a very romantic proposal.

After decorating their brand new living room with hundreds of candles and playing her favourite song in the background, Dominic got down on one knee and handed an emotional Leanne a white gold ring with diamonds in the band, and a solitaire on top.

“I was completely surprised and so happy,” she said. “Although we’d always talked about getting married, we had been so busy moving into together that I thought any notion of getting engaged was on the back burner.”

Though the pair left their wedding planning until after Christmas to give them time to properly settle into their new home, Leanne knew from the very beginning that she wanted a very traditional and intimate church wedding. 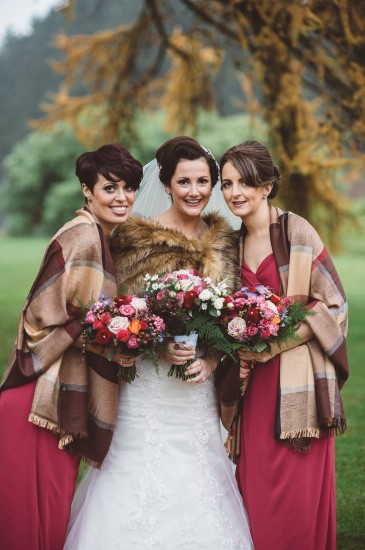 Leanne with her maid of honour Ciara Campbell and bridesmaid Grainne Ward.

“When we first discussed the guest list, we had hoped to keep the numbers under 100,” Leanne explained. “We were determined to have just family and close friends, and I think we stuck pretty close to that as our final number of guests on the day were 115. It was just right.”

Despite finding wedding dress shopping “a bit stressful to start with”, Leanne eventually found the perfect one for her when she visited shop number six, McElhinney’s in Ballybofey. While initially it was her friend who persuaded the bride-to-be to try on the vintage, dark ivory Victoria Jane fitted dress, Leanne soon fell in love with its diamante and pearl encrusted belt and lace back.

“I thought I had a clear idea of what I wanted, but in the end up I chose a dress completely different,” Leanne said. To compliment the style, she also purchased a diamante encrusted church length veil, which she would wear over her face on her way down the aisle. When Leanne’s big day finally arrived, she felt both calm and excited, while Dom settled his nerves with a pint from his favourite pub.

“I couldn’t wait to see Dom waiting for me at the altar,” she said. “There was a great buzz in my parents’ house that morning.” Describing her wedding ceremony as “a lovely, warm and funny service,” the new Mr and Mrs McCann were was treated to an eclectic mix of hymns and their favourite songs. “It was joyous and personal,” she said.

“We were adamant we didn’t want any crying or anything overly emotional.” After being whisked away to their reception in the Greenvale Hotel, Cookstown via a classy Volkswagen Beetle, the pair were soon tucking into their three-tired ivory fruit and sponge wedding cake before dancing the night away to wedding band, The Rockits.

“The whole day just flew in the blink of an eye,” Leanne concluded. “There was an awful lot of work that went into it, and at times it was pretty stressful, but the day itself was fantastic and we’d do it all again tomorrow if we could.” 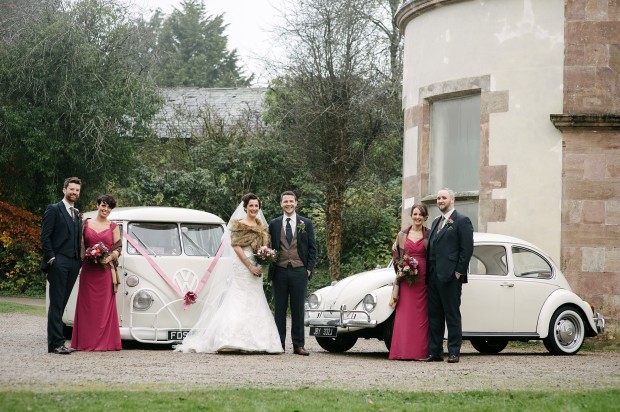