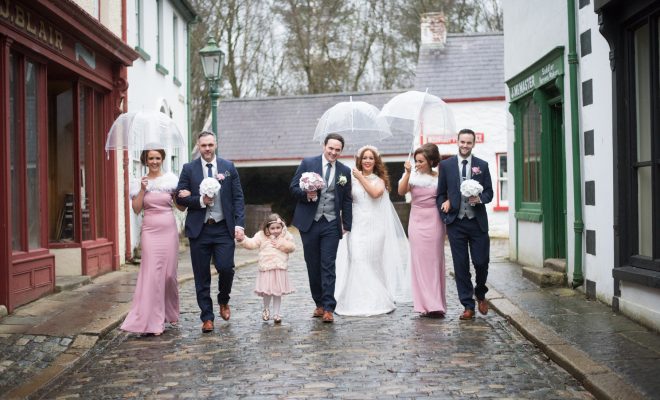 Cara Smyth Murray is the perfect example of a local bride who knows her own mind, and who wasn’t afraid for her wedding to be delightfully different.

Not only did the local nurse have the talent and confidence to handmake her bridal bouquets and church decor by herself, but she also ordered her wedding dress on the internet as she is a self-certified online woman.

Beautiful bride Cara Smyth Murray, shares a giggle with her maid of honour Emma Smyth and bridesmaid Marian McElroy on her wedding day.

She celebrated her wedding proposal with a McDonald’s and cocktails on a rooftop in Thailand, and she even picked out her white gold cluster engagement ring herself as she ‘liked unusual things’.

The Dromore woman and Damien Murray were wed in a beautiful service at St Davog’s Church, Dromore by Fr. McEntee and Fr. Early on February 10, 2018 – the same date as Cara’s 27th birthday.

The newlyweds’ wedding reception took place at the newly-refurbished Silverbirch Hotel in Omagh, chosen by the couple due to its bright, clean decor which was exactly what they were after. 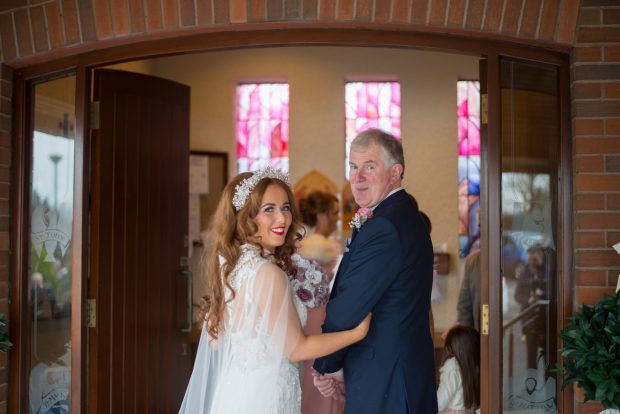 Cara and her father, Francis, pictured just before they made the emotional, yet celebratory, walk down the aisle of St Davog’s Church, Dromore.

Cara first met Damien, a site manager from Scotstown, Monaghan, in September 2012. “We met in Belfast, not long after I had moved home from Liverpool,” Cara said. “It was your classic Thursday night out in Belfast, and Damien was deadly craic. “I knew there was something special about him when he produced a quarter bottle from his sock… Or a naggin as them Monaghan folk go on!”

Together for four years, it was during a romantic month’s holiday away to Thailand that Damien got down on one knee on November 21, 2016 – but not before he asked Cara’s father, Francis for his permission first. 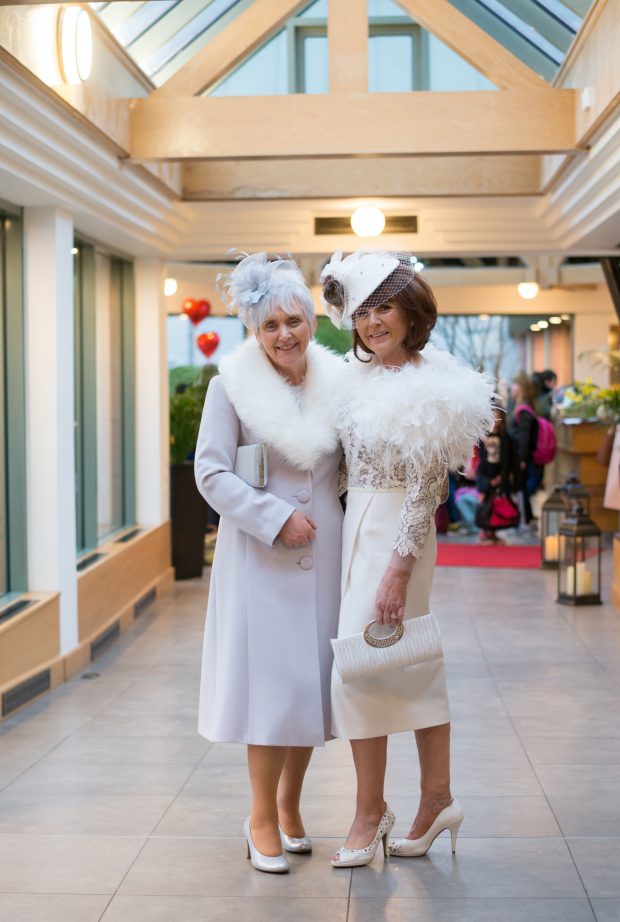 “We were on our last two nights in Bangkok,” Cara said. “I was wrecked from island- hopping, so I had to lie down. Damien said he was going to the gym, but little did I know that he was away ringing my father to double check that he could still ask me to marry him. Thankfully he said yes, and he was apparently more concerned that we had taken the month off, and he told Damien to get back to his work.”

Cara added, “that night I was having a meltdown because my hair was standing on me and my eye-lashes wouldn’t stick and just generally flapping about. I came marching down the suite and the next thing, Damien just grabbed my hand and then he got down on one knee.” Shaking with happiness, Cara recalled needing to walk out to the balcony for air as she thought she was going to faint.

“I couldn’t believe it was happening,” Cara said. “Damien still has the photo on his phone of me just standing looking into the distance in a daze. We had a great night celebrating, which consisted of a McDonald’s and rooftop cocktails. What more could a girl ask for?”

After partying the full month of December 2016, when the dawn of the New Year hit, it was time to take to the internet for wedding ideas. “I love making things and I wanted to do things for the wedding that I could say I made,” Cara explained. “The internet is deadly for ideas, and that’s where I got the inspiration to make the bouquets and the church decor. 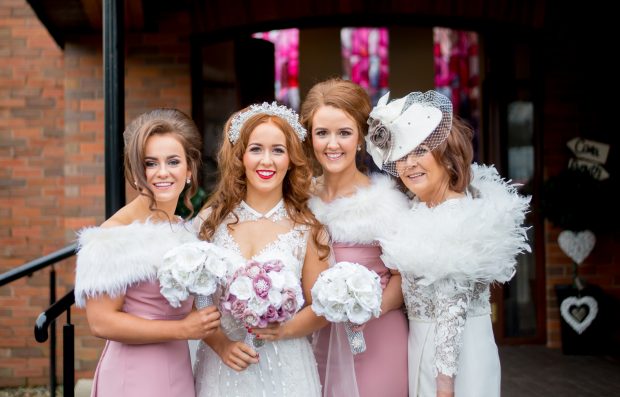 “As far as themes went, the only thing I knew was that I wanted pink bridesmaids. The rest all just kind of fell into place from looking at pictures of other weddings on Pinterest.”

After ordering her wedding dress online from California, Cara waited with baited breath for it to arrive because if it wasn’t right, she ‘didn’t know what she would have done’. “My mother, Pauline was raging at the time because she was obviously looking forward to going around shops and me trying things on,” Cara described. “But as I work full-time days and nights, I just didn’t have time to be going to different places to try things on, and didn’t want the pressure. I also hate shopping.”

But thankfully, the dress – which featured beautiful feminine embellishment throughout with a low back – fitted Cara’s figure perfectly. “My mother now even says getting that dress online was one of the best things I ever did and saved her and me a lot of running the roads,” she smiled. 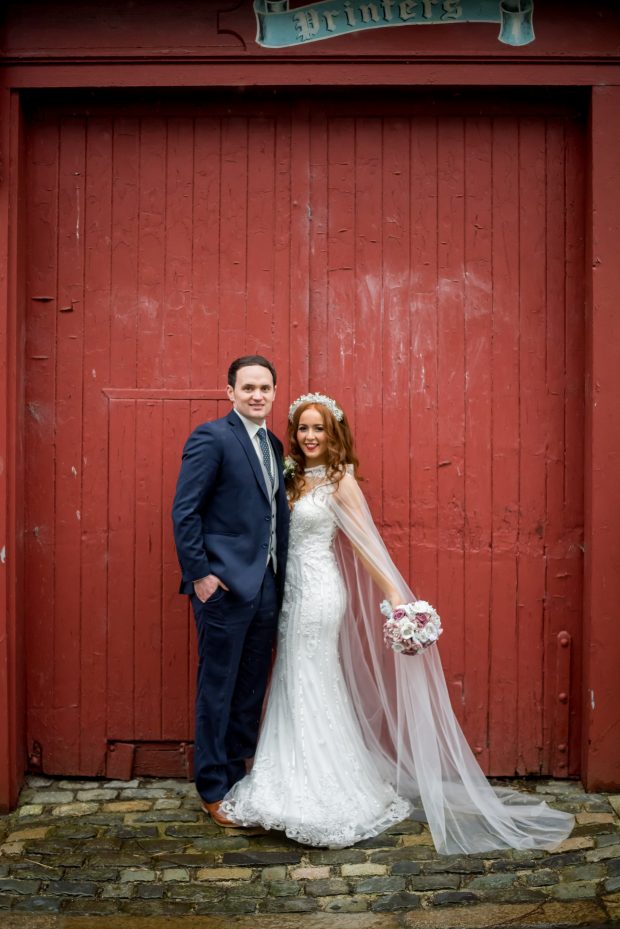 When Cara’s big day finally arrived, she described feeling so excited, and she simply couldn’t believe that she was getting married. “The craic was mighty that morning with my maid of honour, Emma, my bridesmaid Marian and the hairdressers and makeup artist,” Cara recalled.

“We were practicing all morning how we were going to laugh in pictures to make sure we didn’t have double chins. Priorities!” she laughed. “But it was one way of keeping the nerves off.”

After winning a wedding car through a competition with North-West Brides, Cara and her father were whisked away to the church via a classy Glendale limousine – and Cara said that during the wedding service she ‘had never been happier’.

“The McShanes sang throughout the service and they were just fantastic,” Cara reflected. “I felt just pure happy emotion; I’ve never been happier.

“Poor Damien shed a wee tear when he saw me coming down the aisle, but of course he won’t admit it, so I’m patiently waiting to see the video now to prove it. “I couldn’t believe it was all over so quick, and the next thing we knew we were walking back down the aisle.

“Our day was just perfect – I couldn’t fault a thing,” the Tyrone woman concluded. “We never stressed about anything which I think was a big factor in how unreal the day was. As long as everybody had a good dinner and good music, we were happy.”

“I’m now telling my friends who are getting married soon to not be stressing about the day. Most of your wedding is out of your control, so all you can do is show up and enjoy yourself.”

Related Itemsonline shoppingSilverbirch Hotel
← Previous Story Extras You Might Forget To Add To Your Wedding Day Budget
Next Story → 7 Lucky Days To Get Married In 2019, According To Astrology