Celebrating the ‘time of our lives’

A romantic proposal in a lavish Spanish hotel which overlooked the bustling streets, gave Martina McCann and Duane Kille a special moment they will remember for the rest of their lives.

Just over two years later, the pair were wed at St Macartan’s Parish Church, Trillick in a traditional ceremony performed by Fr Artie McCann and Fr Padraig McKenna. The service, on June 10, 2017, was particularly personal for Martina as Fr Artie had Christened her when she was a child, and Duane picked out all of the Prayers of the Faithful and readings.

Their wedding reception took place in the quaint Castle Dargan Hotel in Sligo. The couple chose this venue due to its wow-factor function room which featured eye-catching glass walls – perfect for catching a glimpse of the beautiful scenery outside.

They first met in January 2011 in an nightclub called Element, which was upstairs in Willie Rambler’s Bar, Enniskillen, through mutual friends. Duane was out to celebrate his birthday with the lads, and Martina was there partying with her friend Sarah and a few others. 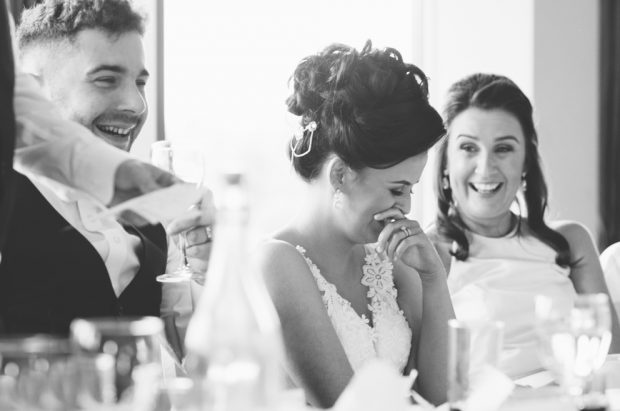 Martina said that she fell for Duane’s kind nature, his patience… and his funny laugh! “I love that he is very considerate and always willing to help,” the Trillick native described. “He is one of my best friends. Duane does his own thing, and is not bothered by what people think of him. “And that laugh of his! His laugh is usually funnier than the jokes he tries to tell me. He always manages to make me laugh no matter what.”

It was during a surprise holiday away to Barcelona in May 2015 – a present from Duane – that they became engaged. In fact, when the pair arrived at the airport for their Summer trip, Martina was convinced that they were travelling to Minehead, Somerset for the weekend to visit Duane’s father!

Martina reflected, “As we were heading to catch our flight, Duane says to me, ‘Tina we’re not actually going to Minehead… I’m taking you to Barcelona!’ “Straight away I thought he was winding me up for he usually is, and I’m quite gullible. “It wasn’t until we were at the check in desk that I believed him, so at this point I hadn’t a clue what on earth was going on.”

When they landed in Barcelona, the heat was sweltering – something not helped by the woolly clothing Martina had packed, fully expecting cold British Summer weather. Tired from the hot climate, the travelling and the cocktails they enjoyed when they arrived in the city, Martina lay down on her hotel room bed for a short nap. But the next thing she knew, Duane was down on one knee beside her bed with a sparkling platinum cluster, round-cut diamond ring in his hand.

“He asked me, ‘Martina will you marry me? I love you so much, and this is all for you… And yes, I did ask your daddy’s permission before you ask!’ “And of course I said yes,” Martina, who is an oil administrator for Beatty Fuels, added. “I was quite shocked and overwhelmed as he had taken me by complete surprise, but I was just so delighted. I knew early on that he would be the man I would marry.” 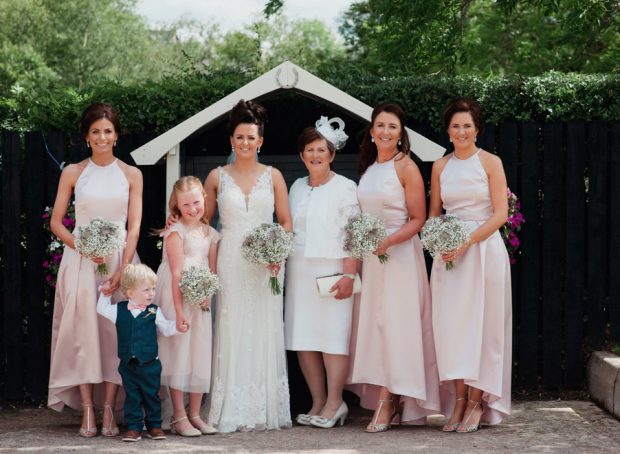 She added, “I still ask Duane regularly if we could get engaged all over again. That weekend was one of the best weekends of my life.”

Duane jokingly put Martina on a ‘three week ban’ from mentioning the word ‘wedding’ while the pair enjoyed the celebrations and initial hype of the engagement. “Later we decided we wanted a mostly traditional wedding with a few modern elements,” Martina explained. “But more importantly we just wanted to make it our own.”

Martina said that she had ‘great craic’ looking at all different kinds of dresses, but her indecisive nature meant that she tried on more than 10 gowns before finding the perfect one. It was a sheath bridal gown with delicate floral lace and ivory underlay, which featured glimmering stones, a v-neckline and low scooped, detailed back. “When I tried it on, it fitted perfectly and suited my shape,” Martina described.

When her wedding day finally arrived, Martina said that she ‘was surprisingly calm’ – but everything began to sink in when she walked up the aisle with her father. However the couple both became a little nervous when saying their vows, and Martina happened to stumble her words during the ‘for poorer’ phrase which caused the whole chapel to erupt in laughter!

“I swear it was unintentional,” she laughed. “Our favourite part of the service was at the end when we walked down the aisle as a married couple to Duane’s favourite Green Day song, ‘Time of your Life’ with all our friends and family clapping and cheering.

“It was one of the best days of our lives – we had an absolute ball,” the 27-year-old concluded. “We had such a laugh and would do it all again in the morning.”