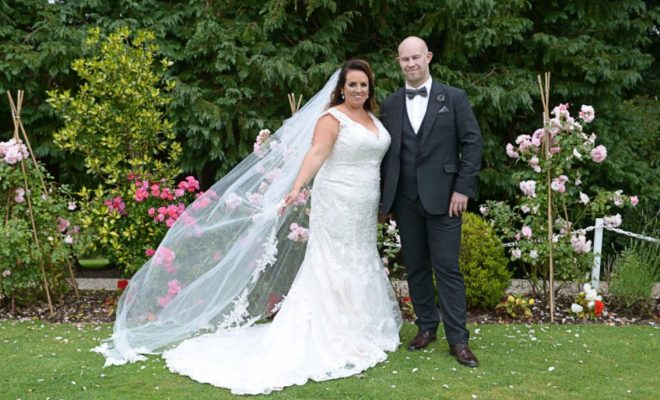 There were tears of joy as Jacqui Weir walked down the aisle with her beloved son, Isaac to marry the man of her dreams. In a venue most elegantly decorated with cream cherry blossom trees, complimenting Jacqui’s dainty bouquet of cream hydrangeas, the Fivemiletown native wed Ryan Mc-Caskie on July 14, 2018.

The pair’s spiritual ceremony, which took place at Clogher’s Corick House Hotel and Spa, was performed by registrar Eamonn Andrews of Belfast Spiritual Church and there was not a dry eye to be seen among the newlyweds’ families. Their wedding reception, too, took place in Corick Hotel, chosen by the pair because of its beautiful gardens set amid a location of fantastic scenery.

Jacqui, a full-time carer, met Ryan, a workshop operative from Drumquin, on a dating website. They enjoyed their first date on January 12, 2013 and there was an immediate spark between the pair. “The first thing I noticed about Ryan were his eyes,” Jacqui described. “He was very different from anyone I had ever dated before, but I knew instantly he was the one for me.”

It was during a special holiday in Majorca in July 2016 that Ryan asked Jacqui for her hand in marriage. “I was shocked but delighted,” Jacqui said. “We had never talked about getting married, so I was quite taken aback.” To ensure that Jacqui received her perfect engagement ring, Ryan arranged an appointment to visit Beaverbrooks Jewellers in Belfast one day after returning to the North.

Together, they picked out a shimmering white gold band, featuring a square solitaire diamond in the centre which caught the light from all angles. “It was exactly what I had always wanted,” Jacqui said. Certainly on the ball, Jacqui successfully organised and booked everything within a fortnight of her engagement.

“We kept our wedding traditional, with some special touches added in to make it personal to us,” Jacqui recounted. “We also opted for a spiritual ceremony so we were able to plan it out totally the way we wanted. “We really wanted my son Isaac, who is now Ryan’s stepson, to play a major part in the service too as he was a big part of our day.”

Jacqui added, “In terms of the wedding design, I really wanted to stick with a classic and elegant colour scheme. “I always wanted my bouquet to have hydrangeas in it, so I chose a plain posy of cream hydrangeas and I organised for cream cherry blossom trees to line the aisle. “We chose Corick House in Clogher as our venue as it is situated amongst some fantastic scenery with beautiful gardens. “We loved the fact that we could have our ceremony and reception in the one setting.”

Describing wedding dress shopping as an experience that she loved, Jacqui knew exactly what she wanted her ideal gown to look like – and she found it in shop number three. The ‘Mori Lee’ gown from Perfect Day, Lurgan flaunted feminine ivory lace bedecked with a lining of light gold and Jacqui fell in love immediately. What’s more, the gown’s fitted and flared shape sublimely complimented Jacqui’s cathedral-length, lace trimmed veil.

“As soon as I put the dress on I knew that it was exactly what I was after,” Jacqui said. “The staff at Perfect Day were amazing and made the whole experience unforgettable. “A special thank you goes out to Cheryl for helping me find the one. She is fantastic at her job, and I couldn’t have asked for anyone better.” 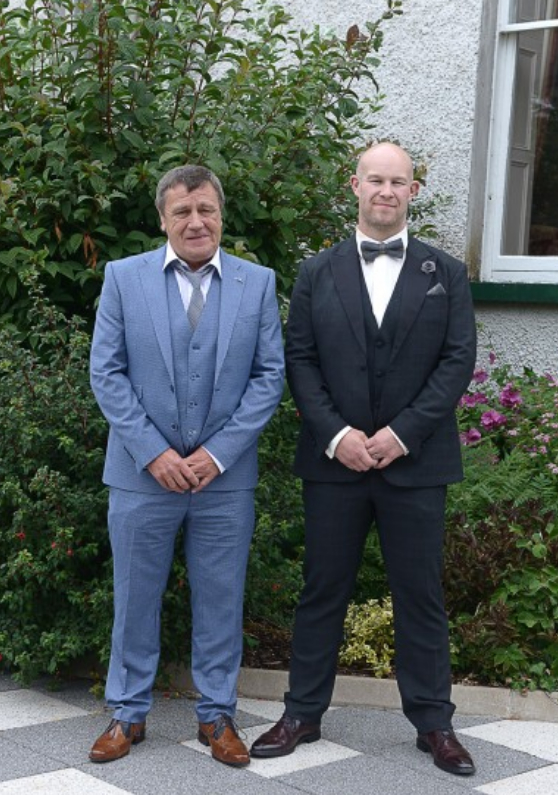 Ryan, the groom, alongside his father, Aiden Mimnagh.

On the morning of her big day, Jacqui felt ‘very relaxed’ and thankfully the weather was delightful too. “The weather was perfect for us,” Jacqui said. “It stayed dry and it wasn’t too warm. There had been some really hot weather in the previous few weeks.” Jacqui had arranged for her uncle to drive her to the wedding reception as she didn’t feel the need to hire an expensive car that none of her guests would see arrive – but her family had a different idea.

“Just as we were about to leave my mum and dad’s house, a stretch Volkswagen Beetle pulled up!” Jacqui said. “My parents had arranged it as a surprise for me, as they knew I always loved the Volkswagen Beetle car. “I was so shocked and excited to get a ride in it,” Jacqui laughed. “The car had also picked Ryan up in Omagh beforehand to take him to the service.”

Though Jacqui began to feel the nerves before walking into her service, walking up the cherry blossom clad aisle with her 14-year-old son, Isaac was a moment that she will always remember. “I don’t think there was a dry eye among our families at that moment,” Jacqui reflected. “We included a sand ceremony in the service, where myself, Ryan and my son combined three different colours of sand into one jar to show us joining together as one family.”

Later on in the day, the new Mr and Mrs McCaskie received a spectacular wedding present from Jacqui’s cousin, Christopher Morrow aka DJ Chris – a music set. “Then afterwards, we enjoyed a buffet before the band, The Mad Arabs played into the early hours,” Jacqui explained. “Also, as part of the entertainment, we had a caricaturist there who kept the guests entertained for most of the night with his portraits of everyone.

“We had an amazing day; it was everything we had hoped for and more,” the 38-year-old concluded. “There isn’t a single thing I would have changed. It really was the perfect day.” 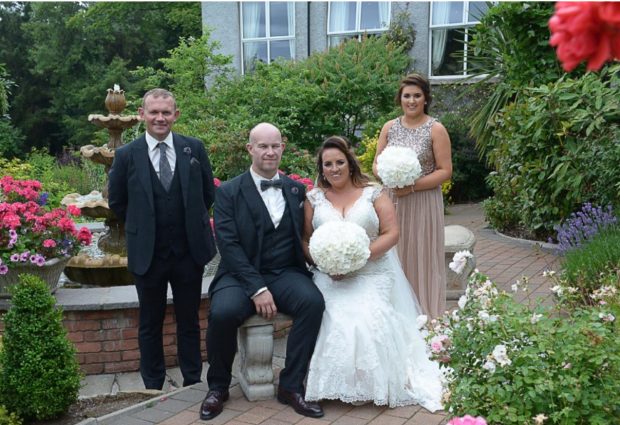 Related ItemscakeengagementflowershotelmusicproposalreceptionringvenueweddingWedding dress
← Previous Story Niamh and Mike enjoy a taste of Royal flavour on their wedding day in Tyrone
Next Story → Ice-creams, sunshine and a perfect wedding day for Hannah and Richard