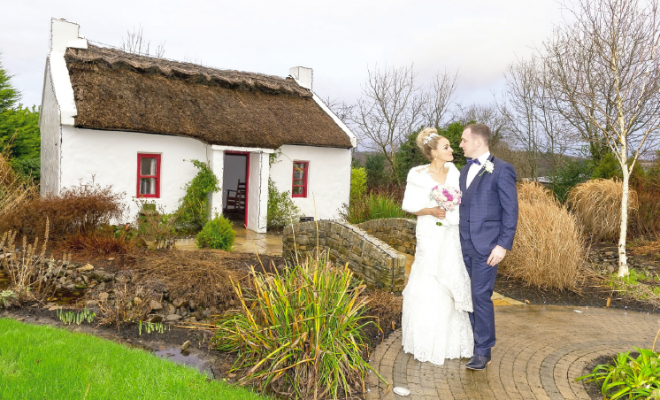 A WEDDING day which took place on a cosy New Year’s Eve set the tone for a perfect 2016 for newly-weds Louise McElroy and Andrew Devine.

The pair from Strabane, who are in a relationship that has spanned over a decade, were wed by Fr Dominic McKenna in St Mary’s Chapel, Melmount on December 31, 2015.

Louise first met Andrew when she was working in a hotel in 2006, and he happened to be on a night out with people she knew.

But while she admits that it was not love at first sight, romance blossomed unexpectedly over the months that followed.

“I actually tried to set him up on a date with a friend-of-a-friend,” she joked. “But our friendship eventually turned into something more.”

Being with each other for seven years, it was on Christmas morning 2013 that Andrew (31) surprised Louise (30) with a romantic proposal.

“I woke on Christmas morning at 8am… I’m a big wean,” she laughed. “And he was already up and I saw a Christmas card placed on my bedside locker.

“I got up and went downstairs. The house was in darkness, except for the Christmas tree lights and living room lamp. Then I realised he was up to something.”

While she was dressed in her new Christmas day pyjamas and he was draped in his Christmas day outfit, he got down on one knee in their living room and presented his love with a large, vintage rectangular platinum ring.

“I was shocked, happy, overwhelmed and excited,” Louise said. “The ring is full of diamonds which still sparkle today.” 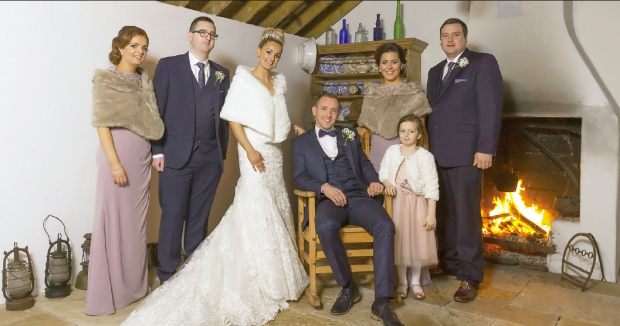 Leaving wedding planning until after Christmas, Louise soon found her perfect gown from the second store she visited – Ultimate Dresses, in Dungiven. From the ‘Allure Bridal Collection’, the fitted a-line dress featured glittering ivory lace and a long trail.

“The brand is known for their sparkle and vintage look,” she said. “It was just perfect for a New Year’s Eve wedding.” Hoping to keep her wedding a cross between modern and vintage, Louise secured the popular Villa Rose Hotel, Ballybofey for her wedding venue.

When the morning of her big day arrived, she described feeling very anxious yet excited for the events ahead. “At one stage I thought I was going to pass out,” she said. “I’m the only daughter in my family so it made all more emotional – but surprisingly there weren’t too many tears.

“We had been in a car accident two days before our wedding,” she described. “A tree had fallen on top of our car while we were going to lift our table plan. We were so lucky, and I think the shock kind of made me less nervous on the day as I thought I was going to be.”

With a wedding ceremony featuring music that is close to their hearts, Louise said that herself and her bridal party felt a mixture of emotions during the service. “Our entrance song was ‘The One’ by Kodaline,” she explained.

“This was our favourite song which talks about love, marriage and life from the first day we met until walking down aisle.” Soon it was time for the newlyweds to tuck into their four-tier vintage wedding cake, covered in lace flowers and pearls. 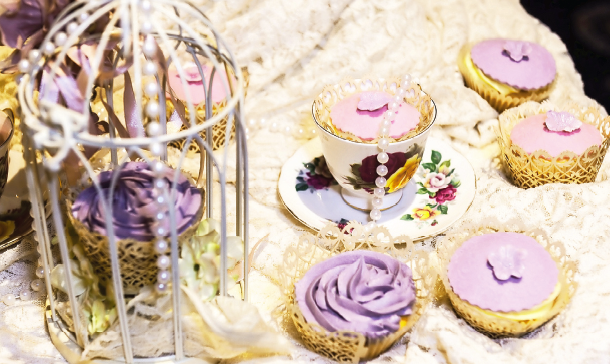 The new Mrs Devine decorated her wedding cake’s table with a lace cloth, pearls, vintage tea cups and saucers and vintage cupcakes in colours that would match her bridesmaid’s gown.

With Ellie Goulding’s ‘How Long Will I Love You?’ setting the tone for their first dance, Louise alongside her 198 guests jived the night away. “Getting married on New Year’s Eve added a special feeling to the day,” she concluded.

“We couldn’t believe how well everything went from start-to-finish. “Alongside the most important family and friends in our lives was definitely a great way to bring in the New Year.”