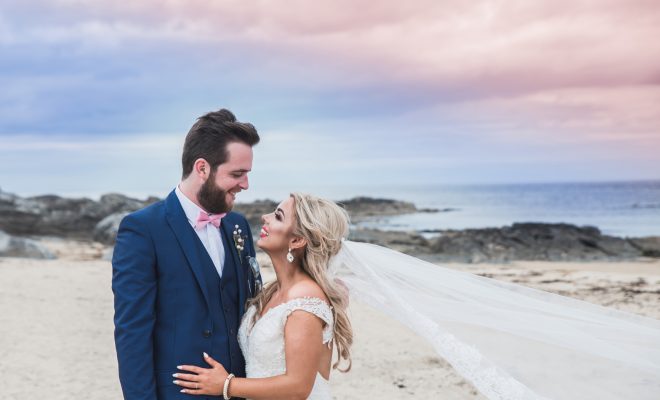 Not only was their church draped in pastel colours and fresh flowers, their wedding reception took place near a sparkling beach and was decorated from top-to-bottom with bunting, oversized balloons, paper lanterns, pom-poms and wooden signs which were hand-crafted by the groom.

The pair, who are both from Strabane, were wed by Fr Declan Boland at the Church of the Immaculate Conception, Strabane on July 7, 2016.

They first met each other in the Summer of 2005, while working together at their local golf club. And while Clare says that Declan is quite a keen golfer, she admits that she still doesn’t know much about it! But opposites attract, as they say.

“We were good friends for a few months first before we actually went out,” she recalled. “I liked that he was very laid back and outgoing, and had a good sense of humour.” 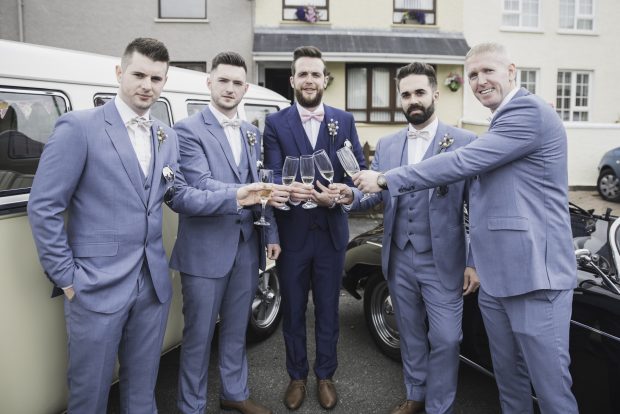 When the pair were together for nearly seven years, Declan asked Clare for her hand in marriage and presented her with a glittering white gold halo ring, with a central pearshaped stone which she loved.

“He proposed at Christmas in 2012,” Clare reflected. “It was very understated and very Declan. And I believe I laughed first! Sometimes you don’t know if he is being serious or not.”

Very early on, the pair had their hearts set on a warm wedding day which would take place in the heart of the Summer. From there, they began ordering a wealth of quirky decorations online to bring their own personalities to the wedding.

“I love pastel shades so I had a good idea of the colours,” Clare described. “We both wanted a real party theme, and wanted to do a lot of the things ourselves.

“I ordered a lot of the decorations online, and I think we had over 200 metres of bunting on the kitchen table at one stage!

“Declan is good at woodwork so he was able to make signs and help with some of the work.

Our wedding also featured jam jars, and we printed off table games and made our own table plan.” For Clare, wedding dress shopping proved a fun experience at first. However, she was plagued with indecision, and even though her wedding was in mere months, she still had not decided on a gown. 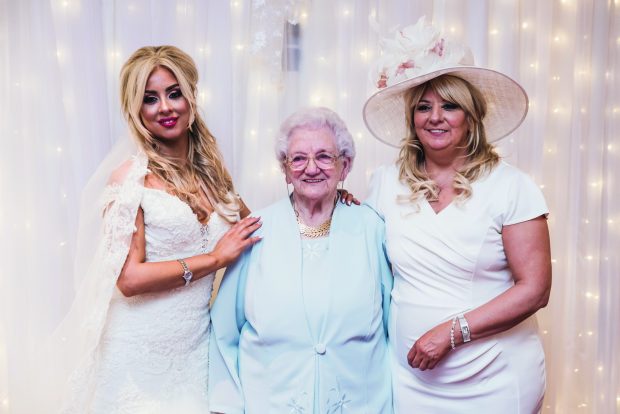 The new Mrs Patton celebrates her wedding day with her loved ones.

“I had a certain style in mind at the beginning, but then when I started trying them on, that completely changed,” she explained. “I think my bridesmaids and my mum never want to see another wedding dress again! We give up many Saturdays during our plight, searching for the perfect dress.”

Eventually Clare found a gown that was just right for her in Ultimate Dresses, Dungiven. The fitted number was made by designer, Justin Alexander and featured a low back and a dramatic tulle bottom. “I loved it, but it was nothing like what I was initially looking for,” she said.

Clare and Declan chose Ballyliffin Hotel Lodge and Spa in Inishowen, Donegal to host their wedding reception – a place in the heart of a small village.

“The landscape was picturesque and we had the backdrop of the beach,” Clare described. “We wanted to take our camper van to the beach and get some nice photos on our wedding day.” 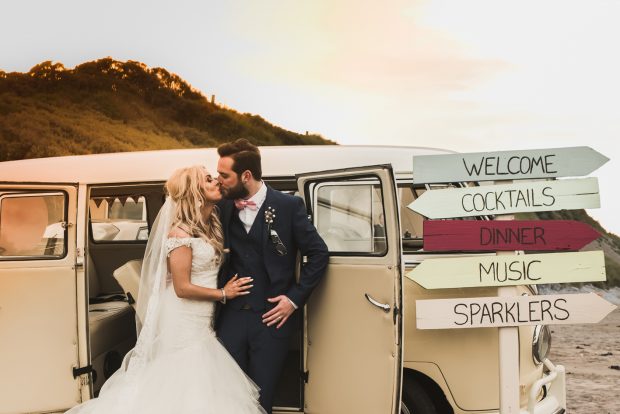 The newlyweds, Clare and Declan share a kiss on a beautiful Inishowen beach as the sun sets on their wedding day.

When Clare’s big day finally arrived, she felt “so calm and excited” – however, she said that she must have “been through every emotion possible leading up to the wedding.” “When I woke the sun was out, and I couldn’t wait to enjoy every minute of the day,” she said.

Clare found herself ‘racing down the aisle’ due to nerves – her father, Kevin had to ask her to slow down! She described her service as “the nicest part of the wedding.” “The priest was great; he really brought everyone together, and the service had quite a few emotional moments,” she reflected.

“We had a friend play ‘Amazing Grace’ on the pipes. This was a song that my grandmother loved, and it was played at her funeral. We felt it was important to have something for the people that couldn’t be with us. “We also played one of Declan’s grandmother’s songs for the Offertory, and we used my granda’s coin.”

She added, “One of our good friends also wrote a poem for us, and read this at the end of the service. Then we left the chapel to Stevie Wonder’s song, ‘Sign Sealed Delivered’.

“We really enjoyed the day, and were so glad that everything went so well,” the 33-year-old concluded. “The speeches were really entertaining and we had table games for the guests to see how well they all knew us.

“We were really relaxed at the reception and got a chance to speak to everyone. “It was so important for us that everyone had fun and enjoyed the wedding with us.” 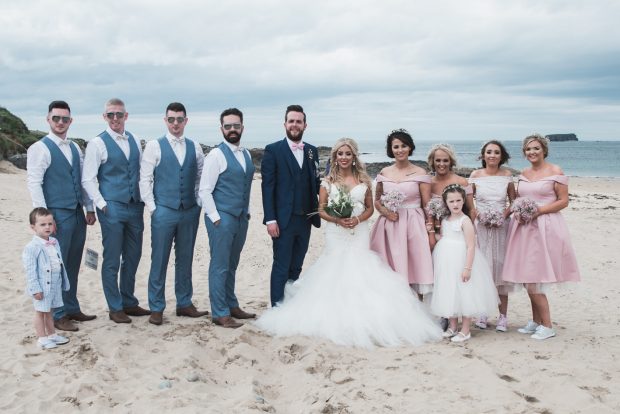