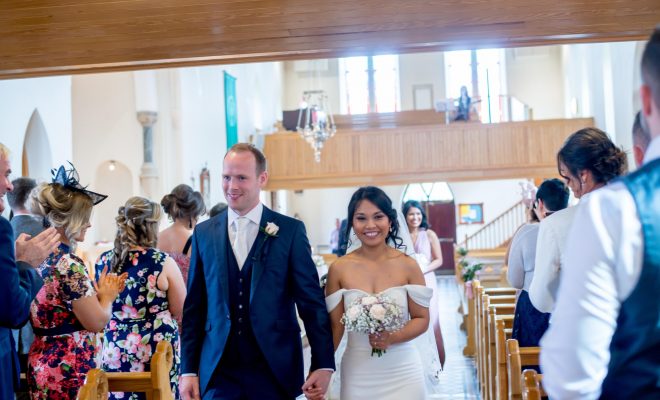 Darryl did just what Beyoncé suggested, and put a ring on it

When Irish Romero said these famous words from Beyoncé casually to her boyfriend, ‘If you like it, you shoulda put a ring on it’, she wasn’t expecting a wedding proposal right then and there. But that was exactly what happened, and the best part was that the beautiful ring that Darryl McCullagh ‘put on it’ was exactly the one that Irish wanted.

It was a scene that captured the hearts of the couple, who said that it had that wow factor from the very first time they drove up its laneway. “You could see this stunning castle nestled between the trees and beautiful grounds,” Irish recalled. “Once inside, the surprises just kept coming with the stunning décor and function rooms that made me feel like a princess.”

Irish, who lives in Killyclogher and works as a retail assistant store manager in Cookstown, first met Darryl, who is from Greencastle, during her first year of study at Ulster University and was blown away by his kindness. “It was a Monday night in early April 2010, and I was out in Belfast,” she recalled. “I had a little too much alcohol and he came to my aid, helping me find my friends. “Darryl asked for my number to ensure that he could check that I got home safely after reuniting me with my friends.”

The pair began dating shortly after that night, and on August 7, 2010, Darryl plucked up the courage to ask Irish to be his girlfriend and the years rolled by. “Darryl is just wonderful,” Irish said. “He has the patience of a saint and he’s so generous, giving and loving. “Every day I’m glad to have him in my life.” 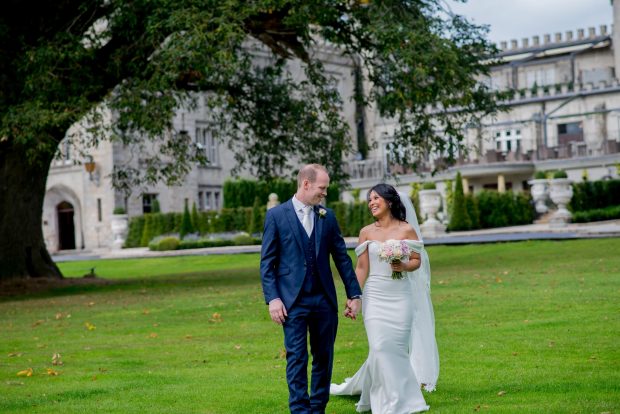 The new Mr and Mrs McCullagh wander around the spectacular gardens of Cabra Castle in County Cavan on their wedding day.

After five years together, Darryl asked Irish’s father, Ronald for his permission to wed Irish and on September 6, 2015 – just one day after his birthday – he got down on one knee and proposed.

“Darryl and I had discussed the topic of marriage a few times and I had always told him that I wanted a low-key proposal,” Irish explained. “We were heading out for dinner for his birthday, and we were casually just chatting about weddings and marriage. “I remember even quoting Beyoncé: ‘If you like it you shoulda put a ring on it’. “But I didn’t think he will do it there and then in the car! “He was there with the ring in his hand, and asked me to be his wife.”

The proposal certainly caught Irish off-guard and at first she was completely stunned… In fact, she thought that he was joking to begin with! “But once I realised that he was serious, of course I answered yes and I was delighted,” she said. “He also gave me a beautiful speech. I couldn’t even eat my dinner; I just wanted to go home and tell our families. It was perfect.”

Irish’s engagement ring featured a dainty thin band amidst a stunning princess cut diamond – a style that gave her déja vu. “It took me a couple of days, but I recognised the ring,” Irish said. “ A few months before we got engaged, we went to Bogue’s Jewellers and I saw the ring and I said, ‘That’s what I want’ as it was perfect.” She added, “When I asked him if it was the same ring, he said he went back to the jewellers the next day and bought it.”

After celebrating their engagement with friends and family, the pair began looking at venues. They booked Cabra Castle within a week, and decided to give themselves three years to plan for their big day. “That meant that we had plenty of time to research the best wedding suppliers,” Irish said. 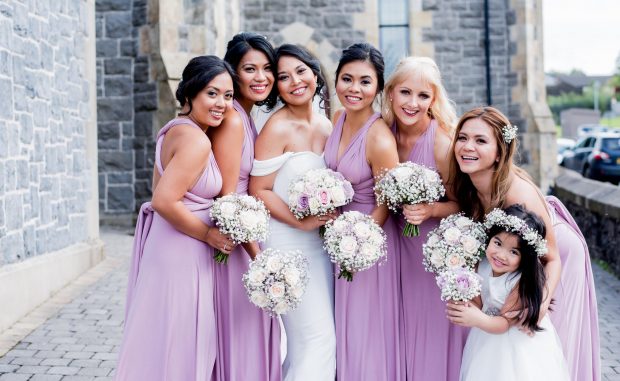 “Darryl and I both come from very traditional backgrounds, so we liked the idea of a traditional wedding with a few modern twists. “I knew that I wanted the wedding vibe to be romantic, so I picked colours of blush pink and gold tones. “However I really didn’t have any preference regarding flowers,” she added. “I got Jude, our florist from Floral Temptations, to see what was best and it worked out perfectly.”

For Irish, shopping for wedding dresses in London with her sister, Karren and friends was an ‘amazing experience’. They visited a couple of wedding boutiques before Irish finally made her way to Pronovias’ flagship store. Disheartened that they couldn’t find anything, they made their way to the door. However just as they were all about to leave, Karren asked Irish if she wanted to try on the dress displayed in the window. “And it’s a good thing I did, because it was perfect,” Irish said. “I loved it because it was simple and elegant.”

The white mermaid design in a crepe material featured a strapless neckline, detachable soft cap sleeves that fell off-the-shoulders, and a feminine strapless neckline. “It’s true what they say – you will know if it is the right dress,” Irish said. “We were all crying.”

Irish recalled feeling ‘very relaxed’ on the morning of her big day, and explained that she got up at 6am to get ready. However as soon as she arrived at the church, her nerves and emotion set in. But happily, the priests injected plenty of humour into the traditional service which kept the atmosphere light-hearted – an approach which soon quelled Irish’s anxiety.

“Our service was beautiful from the start to the end,” Irish said. “One of the most emotional parts was when I walked down the aisle and saw Darryl waiting on me at the altar. “Throughout the ceremony, Fr Daniel and Fr Eddie kept the Mass very light-hearted, and it really helped set the tone for the day ahead. “The music by Ciara Fox was also beautiful.”

Whisked away to Cabra Castle, the newlyweds enjoyed their day so much that they stayed on the dance floor until the early hours of the morning – and rumour has it that the new Mr and Mrs McCullagh’s party carried through until 6am. “Myself and Darryl had an amazing day,” the 30-year-old concluded.

“Our friends and family also told us how much they enjoyed our wedding day. “The atmosphere was lively, and the entertainment kept everyone on the dance floor and laughing all night long. “We would just like to say a massive thanks to all those who helped us make our wedding day so special.” 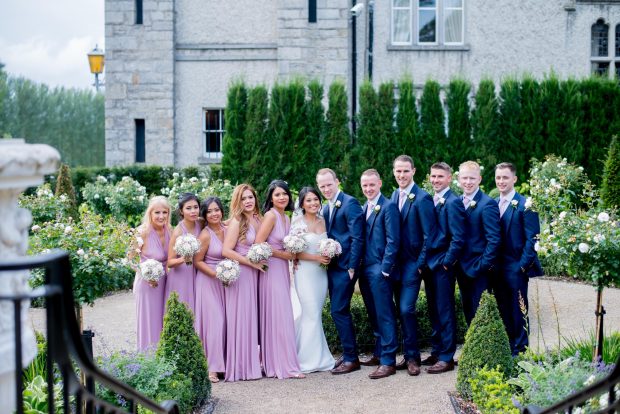