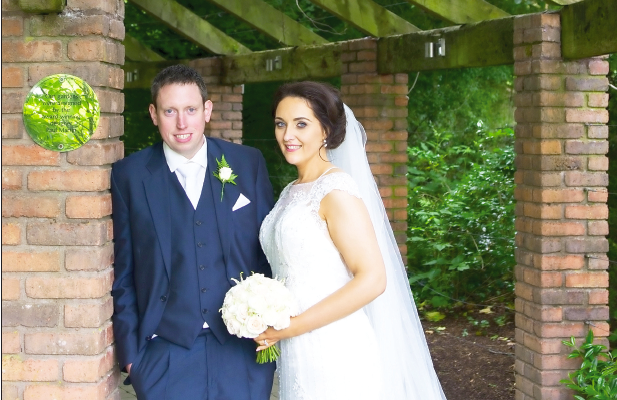 Double celebrations for Una and Gerard on their wedding day

Una Devlin’s 28th birthday was certainly made extra-special by a surprise proposal – but marrying the love of her life on his birthday gave the pair a “perfect day from start-to-finish.”

The pair first met on an autumn night out in Sally’s in 2009, but it wasn’t until January of 2010 that they began dating.

“Things were slow to begin with as I was working and living in Dublin, so I was only home every weekend,” Una explained. “We started going on dates from January to March, eventually getting together in April 2010. “Then, in 2013, I moved out of Dublin and set up home with Gerard in his home town of Monea, Co Fermanagh.”

Together for four lovely years, it was on June 21, 2014 that Gerard (30) got down on one knee and asked his girlfriend for her hand in marriage.

Whisking Una (30) away to Belfast so she could choose her perfect engagement ring in Lunn’s – the same place where the pair would later choose their wedding rings – it didn’t take long for her to pick out a diamond cluster engagement band, made from shimmering platinum. 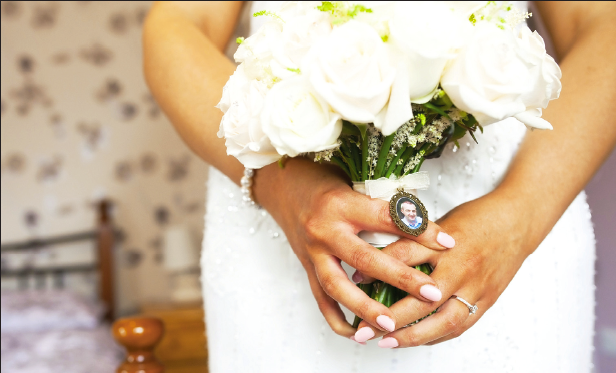 “I was just delighted when he proposed,” Una reflected. “I was also very excited to go ring shopping!” Eager to begin wedding planning shortly after their engagement, the pair had their hearts set on a bright spring or summer wedding.

“With both our birthdays falling three days apart in June, we decided to set the date as June 18 as that was the date of Gerard’s birthday,” she said. “We wanted a nice, simple traditional wedding, where all of our family and friends could join us.”

Visiting five different bridalwear shops with her mother, Mary, her sister, Sinead Quinn and three bridesmaids, it was in Simone’s, Sligo that Una found the dress perfect for her.

Gerard, son of Margaret and Seamus Meehan, weds Una, daughter of Mary and Martin Devlin, on June 18, 2016 – the same date as the groom’s 30th birthday.

sleeves and an illusion low back.

The pretty style was finished-off with crystal buttons. “I just fell in love with it as soon as I saw it,” she said. As both the newlyweds-to-be loved the Slieve Russell Hotel, Co Cavan, they knew that was the venue for them.

“We liked it as it’s a lively hotel with friendly staff,” Una said. “It also has lovely gardens, making it a perfect place for pictures. “It’s also about 40 minutes away from our hometowns of Fintona and Monea.”

When the pair’s big day finally arrived, Una admitted that they both simply couldn’t stop smiling. “We were both feeling very relaxed,” she described. “We were so happy to have all of our family and friends around us to share our special day.

“The weather was also lovely and dry, with a little bit of sun shining through.” She added, “The church service was also very important to both of us as it was the next step in our relationship. It gave us the opportunity to make a public lifelong commitment to each other.”

Travelling to their wedding reception in a snazzy Limo Hummer, it was soon time for the new Mr and Mrs Meehan to cut their beautiful five-tier wedding cake, baked by Una’s brother-in-law, Paul Quinn. It featured intricate white icing, iced flowers, and was topped with a little bride and groom.

The groom sported a Derrygonnelly football jersey to mark Gerard’s passion for his local team. After holding each other during their first dance, a cover of Aerosmith’s ‘I Don’t Want to Miss a Thing,’ sang by Justin McGurk, it was then time for the newlyweds and their 210 guests to dance the night away.

Una concluded, “Overall, our wedding day was very relaxed, and was just how we wanted it. It was the best day of our lives so far, and was perfect from start-to-finish.”