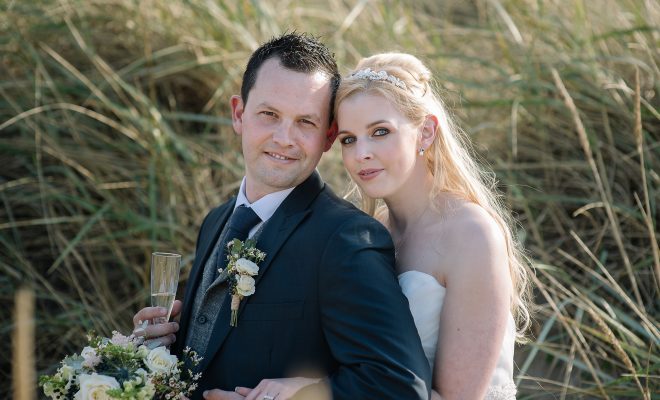 Elaine Monaghan and Richard Dolan always knew that they wanted their wedding to take place in the heart of Autumn – but what they never expected was for the beaming hot sun to come out and join them on their big day as well!

As sunlight flooded through the stained glass windows of St Mary’s Church, Pettigo, the pair were wed by Fr Owen J McEneaney on October 22, 2016.

Elaine, from Pettigo, recounted that she had met Richard – known by friends and family as Richy – through mutual friends approximately six years before their friendship merged into a relationship.

“He was always someone that I would say hello to or briefly have a friendly chat to on a night out,” she explained. But when Elaine reached the age of 23, she wanted to make significant changes to her life. So she decided after much thought to move to Reading in England – and as destiny would have it, Richy was also there for work purposes.

“When I realised he was in the same area, I got in touch,” she explained. “It was only after we both ended up in England together that we really got to know each other properly, and realised how well we got on together and started hanging out a lot. That’s where our story began.”

Months passed, and the Aghyaran man simply knew that Elaine was the one he wanted to spend the rest of his life with. So when the pair went on a day trip to London together, Elaine understandably did not suspect that he was on the look out for a perfect engagement ring in one of the city’s most high-end stores. 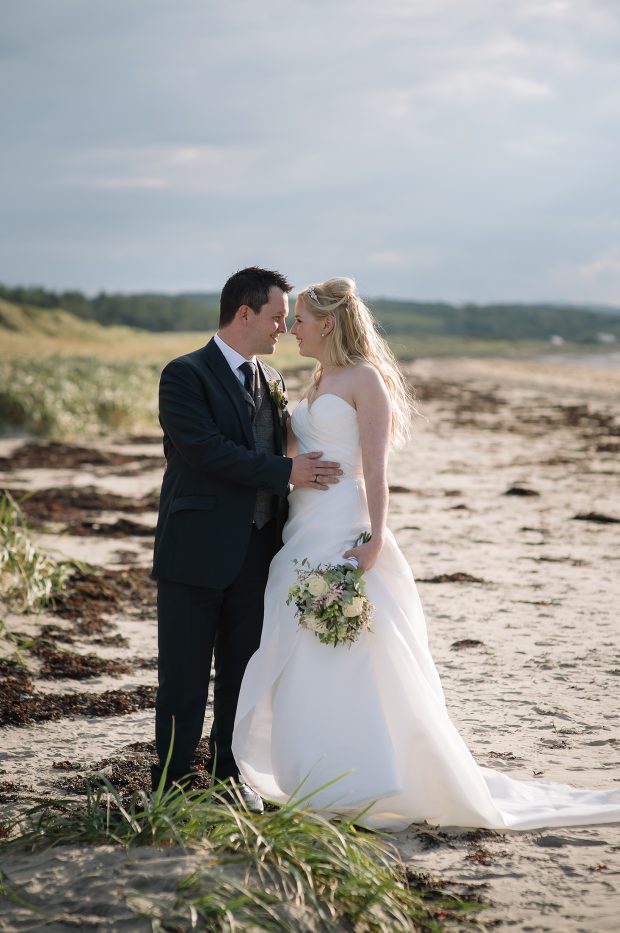 Elaine and Richy enjoy their first romantic stroll as husband and wife. The setting on this very special occasion was Murvagh Beach in Donegal.

“We went into Harrods, and were walking around the jewellery department,” she reflected. “Little did I know he was fishing for ideas of what style I liked.”

Together for a special nine months, and a few weekends after ring shopping, Richy proposed on a bridge in Reading’s town centre – a place which was alive with special memories for the pair. “That was where we used to meet up, and sit and watch the world go by as we got to know each other,” she smiled.

“I recognised the ring as one I had tried on, and fell in love with, in Boodles.” The ‘beautifully simple’ ring design featured a platinum band with one perfectly cut diamond sitting nicely in its centre, “It was perfect for me and my taste,” Elaine smiled.

“Me being me, I cried when he proposed. I can be very emotional. It actually shocked both of us that I managed to hold it together on our wedding day!”

Hoping to spend their big day in their beloved Ireland, the pair got stuck into wedding planning almost straight away. “I knew that I wanted a simplistic, natural/ autumn theme throughout,” Elaine described. 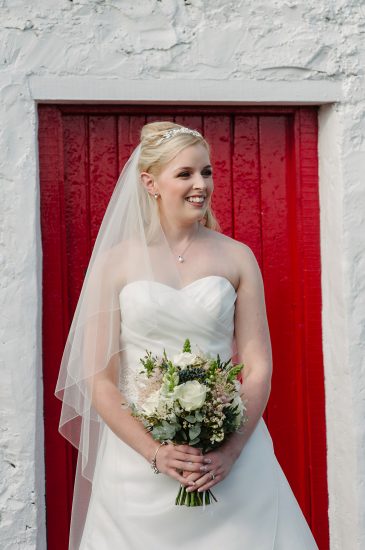 “Pinterest was also amazing for the ideas that came into my head. And then once I chose a supplier, I seemed to be very lucky that they knew exactly what I wanted.”

Elaine certainly doesn’t enjoy shopping for clothes, so she admitted that wedding dress shopping in England was something that she was ‘dreading’. Especially as she feared she would have to do it alone.

However, her thoughtful fiancé had that covered. “Richy had gone and booked a flight for my mum to come over as a surprise for my dress shopping after I booked my first appointment at Village Brides,” she beamed.

“I tried on six dresses, and the seventh gown was the one. ‘Happy days’, I thought. “I was glad I had found it so easily without having to go to 20 different bridal shops.”

Her glamorous white gown flaunted a sweetheart cut, which was fitted to the waist and then flowed out with a short trail. “It was very plain, except for a pearl and sparkly band around the waist,” she recalled.

When her big day finally arrived, Elaine described feeling ‘strangely calm’ – a sentiment backed up by many of her guests who told her she was the most relaxed bride they’d seen. 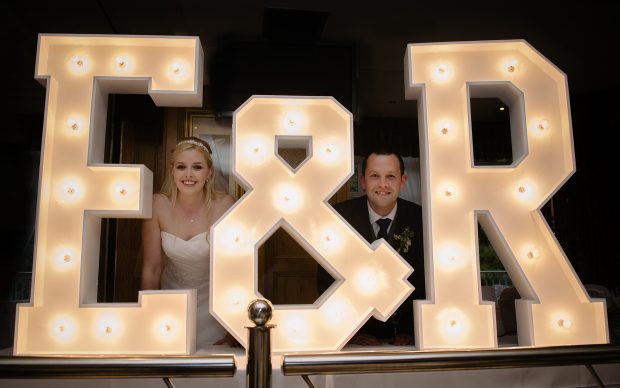 Elaine and Richy’s initials go up in florescent lights as the couple enjoy their wedding reception in the Abbey Hotel, Donegal

“So many who attended also told us how lovely the ceremony was,” she recalled. “The only glitch was that I managed to forget to bring our marriage documents, which we had to sign at the end, to the chapel… Whoops! “After a moment of panic – and finally remembering were I had hidden it away – a friend drove back to the house to get it just in time.”

Following their eventful service, the newlyweds were whisked away to their wedding reception in the Abbey Hotel, Donegal via a classy black Chrysler… A wiser choice, Elaine thought, than their original intentions of a rally car!

Swapping her uncomfortable heels for snazzy white Converse trainers, the newlyweds then danced the night away to Justin McGurk and the Boogie Men and then a DJ.

“Our wedding was amazing,” the 25-year-old concluded. “It couldn’t have gone better. We had an amazing bridal party, amazing weather, and amazing suppliers that made us feel at ease all day with no worries.” 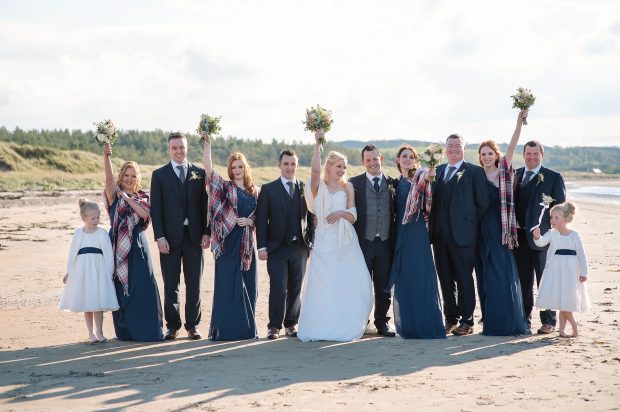 The new Mrs and Mrs Dolan, alongside their maids of honour, Louise Monaghan and Kirsty McGarvey and best men, Ruari McCallion and Kevin O’Brien. Also pictured are bridesmaids, Michelle Greenan and Caroline Gallen, groomsmen, Stephen Dolan and Gary Monaghan and flowergirls, Dana and Ellie May Gallen.