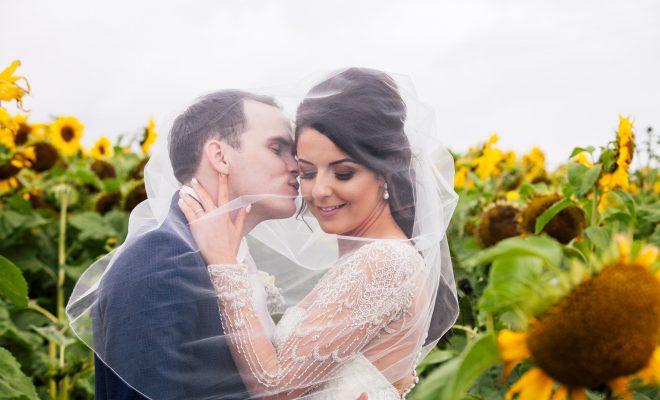 When the clock struck midnight to mark New Year’s Day in 2015, Emma- Louise Donnelly had no idea that her life was going to change forever.

After gazing out at Derry’s illuminated Peace Bridge from her hotel room patiently awaiting the city’s fireworks display, she turned around to speak to her boyfriend, Darrel Mulgrew… And he was down on one knee with a glittering diamond ring clutched in his hands.

Fast-forward to 2016, and Father Michael Doherty wed the pair at the Sacred Heart Church, Omagh on September 2. Emma-Louise, who is a nurse from Omagh, explained that she met Darrel in Liverpool where they both were studying – and from the very beginning she found him ‘pretty cute’.

“I fancied him straight away, and kept trying my best to get his attention and break out of the friendzone,” she laughed. “I just had to pretend to be into the same video games as him – guys are suckers for that aren’t they?

But to be fair I couldn’t keep that up for long! It worked though. We were hanging out all the time in a good group of friends, and we had such a laugh. He also worked in O’Neill’s bar in Liverpool, and I’d be lying if I said that wasn’t the reason I spent so much time in there.” 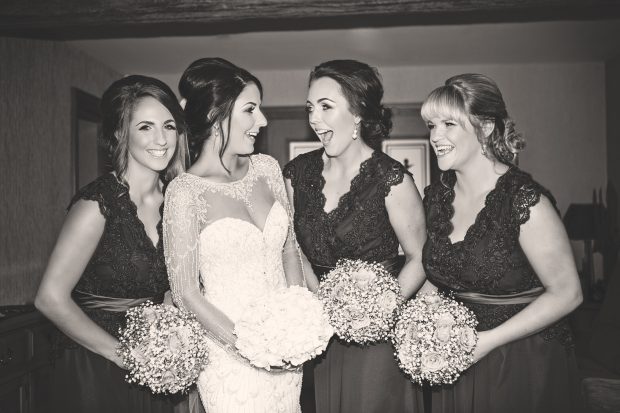 Blushing bride, Emma-Louise Mulgrew shares a laugh with her two sisters, Clare and Ciara Donnelly, and her cousin, Caroline McNamee on her wedding day.

In February 2010, they made their relationship official, and it was on New Year’s Eve 2014 that the Limavady man’s proposal plans began to fall into place.

The couple had decided to attend a ball in the City Hotel, Derry and after Emma-Louise has asked to check-in, she was told by the receptionist that her suite could be upgraded to the Seamus Heaney Suite for free.

“I suppose the alarm bells should have started ringing but they didn’t,” she smiled. “I was just ‘woohoo, yes please,” and was all excited telling Darrel when he got in, knowing now that he had planned it. “After having a good laugh at the ball, we decided to go upstairs to watch the fireworks over the Peace Bridge. 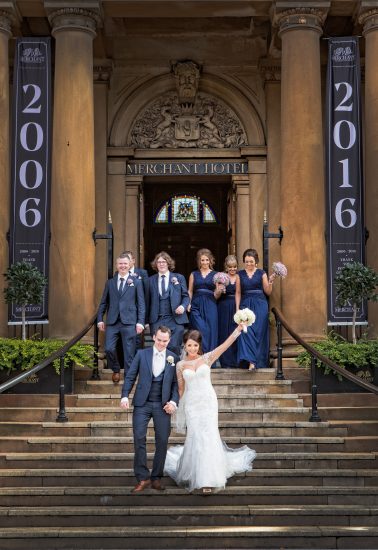 “It was 23:59pm and we went over to the corner windows and started the countdown… five, four, three, two, one… No fireworks… “I wondered if we started counting down a bit early, and I turned to say to Darrel and asked, ‘Where are the fireworks?’ “And when I turned around, he was down on one knee with the ring box opened and said, ‘Here’s your fireworks. Will you marry me?’ “Well I could not believe it,” she added.

“Darrel says that he felt like he was down on his knee forever as it took me ages to get the words out as I was in such shock.” “We jumped around screaming and laughing and crying all at the same time… Happy New Year to us.” 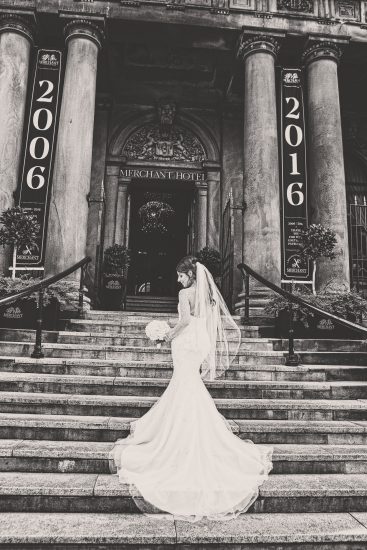 The new Mrs Mulgrew shows off her Justin Alexander gown, purchased from Pronuptia Bridal. It featured a fully-beaded, figure-hugging design, with delicate long-sleeves

Emma-Louise had her heart set on planning an elegant and simple wedding, featuring gorgeous white and ivory flowers with her beloved close friends and family beside her. However, with a lot of encouragement from her friend Lindsay, the couple entered a competition run by Ulster Weddings on Facebook – and won the star prize wedding package, worth £28k.

“We felt like we were in a dream,” Emma-Louise described. “I still can’t believe it when I look back.” Describing The Merchant Hotel in Belfast as a ‘place of dreams’, Emma- Louise simply couldn’t wait to book the venue for her wedding day.

“We felt like celebrities every time we went there,” Emma-Louise reflected. “Every little detail was perfectly planned and nothing was too much trouble. “Never, ever would I have imagined having a dinner in there, never mind having our wedding there.”

On the morning of her big day, the blushing bride-to-be recounted how the weather transformed from drizzle to blue skies and sunshine, and she simply couldn’t wait for the service.

“Fr Doherty is a family friend and he is just so lovely – he made the service a wonderful experience,” she said. “It was calm and intimate and one of the best parts of the whole day.

“Walking down the aisle with my dad, seeing all our friends and family there and of course walking towards Darrel was very emotional. We were full of butterflies and just could not stop smiling!”

She added, “We had our closest family and friends at the wedding. “My brother and sister-in-law traveled over from Australia, we had friends and family from England, Norway and all over. “Darrel’s family getting from Limavady to Omagh to Belfast was also quite a trek so we are very grateful that everyone made it!”

The 28-year-old concluded, “Our wedding day was stress-free and went so smoothly… It was just perfect. “We loved every minute of it and if I could go back in time, I would most definitely visit that day again.” 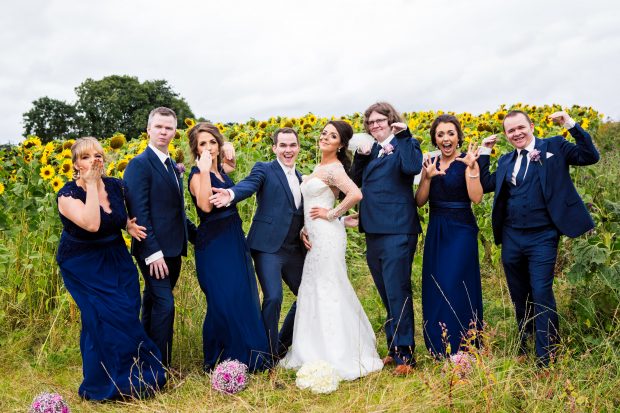 Newlyweds Emma-Louise and Darrel pose for the camera in a field of sunflowers, alongside their maid of honour, Clare Donnelly and best man, Emmet Mulgrew. Also pictured are bridesmaids, Ciara Donnelly and Caroline McNamee and groomsmen, James Mulgrew and Sean Mulgrew.