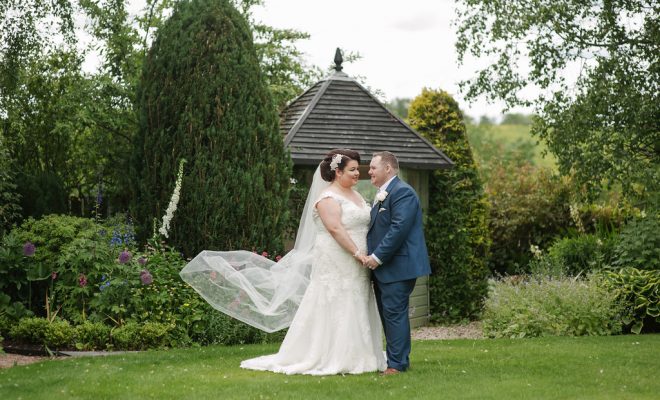 For Emma Gallagher, the perfect wedding day could not be rushed. The Tattyreagh woman was engaged to her partner, Niall Quinn for two years before they set a date to be wed – and then two more years passed before they celebrated their big day. But it was certainly worth the wait.

With colours of raspberry and champagne decorating the intimate St Malachy’s Church in Seskinore, a place which Emma fondly recounts as her ‘family chapel’, they were pronounced husband and wife by Father McGinley on June 1, 2016.

And what’s more, the new Mr and Mrs Quinn were whisked away to their wedding reception in a Volkswagen Beetle, lovingly named ‘Herbie’ which has been in Emma’s family for a lifetime.

It was originally owned by her great granda, Pop and after he passed away, it was restored with utmost care by her uncle, Patrick. Emma and Niall are now together over a decade, but the pair first met at Drumragh College, a secondary school which they both attended. 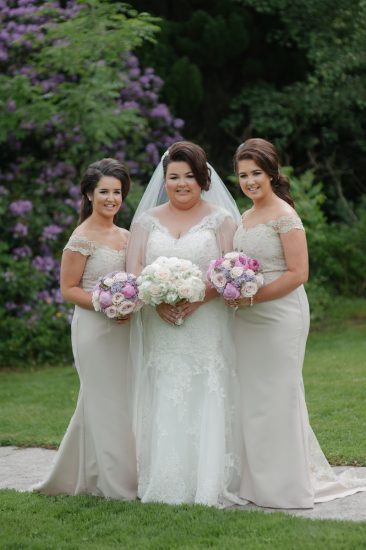 The new Mrs Quinn, alongside her two sisters Sinead and
Leanne Gallagher who were
bridesmaids on her big day.

In fact, they were both in the same form class. “We also sat together in math class which is possibly why I’m so rubbish at it,” she joked.

The special needs classroom assistant was proposed to on November 17, 2012 – half a year after they celebrated six years as a couple. Treating Emma to a birthday weekend away to Harvey’s Point, Donegal, Niall had another present in store for her… an engagement ring.

With bubbling champagne at the ready, the Omagh man presented his love with a sparkling nine carat white gold ring on bended knee.

“I was in total shock I couldn’t stop staring at him and then the ring. Of course I said yes!” she smiled. “Niall picked the ring himself, and I’m sure there was a few trips back and forth to the jewellers, knowing him, “It’s just beautiful and I love it.”

Emma had her heart set on a wedding themed around beautiful flowers, but finding exactly what she wanted proved no easy feat. “Myself, my mum and my sisters travelled the country looking until we finally found David McConkey, an amazing florist who went the extra mile and without him the wedding would not have been the same,” she explained.

“Ciara Patrick Designs is another gem we discovered on our travels. She worked tirelessly to make my vision for the invitations come alive.”

However, Emma admitted that she ‘dreaded the thought’ of shopping for her wedding dress… Until she stumbled upon Creative Ideas in Cookstown.

“They make you feel so special and the range of dresses are amazing,” she described. “It completely changed my view on wedding dress shopping.” Ivory in colour, the glamorous dress she chose featured plenty of bling, lace and a cathedral trim. 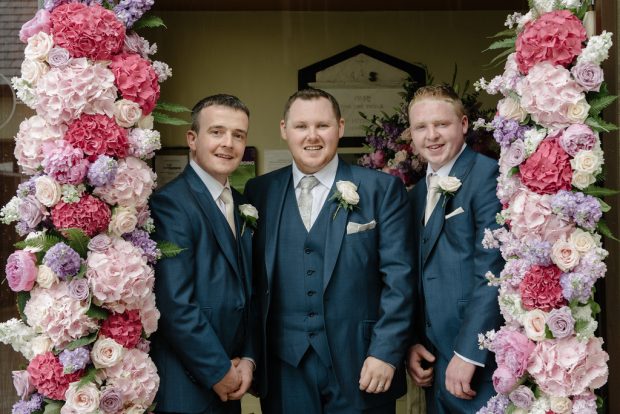 “It was actually the second dress I ever tried on, but I wanted to be sure,” she explained. “So I went away and visited other bridal shops but nothing compared to the dress and the service I received in Creative Ideas.”

She added, “For the mother-of-the bride and bridesmaid dresses, we knew we wanted to have them handmade. “Emma Murnion Fashion Design Hilltown was definitely the woman for the job. Nothing was ever an issue and she created the dresses we all had pictured, if not better!

“The shoes for the bridal party were bejewelled by a wonderful lady at a wee company called Precious Pumps who just happens to be my aunty. She’s the best at what she does. The shoes are still on display in our house.”

On the morning of her wedding, Emma described feeling calm – however the nerves began to set in when she pulled up to her beloved chapel. “Those nerves only ceased when I began to walk down the aisle,” she reflected.

“However I was really humbled to be married in a chapel that means so much to me and my family. “St Malachy’s is small and quaint, and it’s where my granda and uncle are buried. So having my wedding there was very special.

“Our wedding day was so stress free, and it was everything and more we hoped it would be,” the 26-year-old concluded. “I can’t thank the likes of Del Loughran, who did the bridal party hair and makeup, enough. “She brought calmness and laughter to the house on the morning of the wedding and made us all feel so beautiful.

We also owe a huge thank you to Hughie and Kathleen Ward of Tattykeel House, Omagh where we had our stunning photos taken in the sunshine. “They provide a stunning venue along with first-class hospitality.

Our close family and bridal party were fit to relax in their beautiful garden while enjoying many of Kathleen’s kitchen treats… All while our photographer Jude Browne worked her magic!” 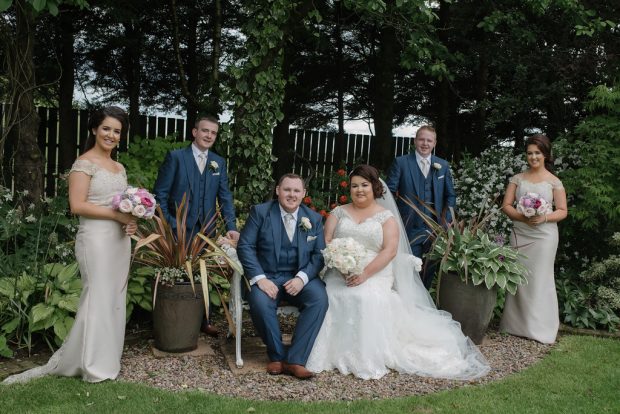