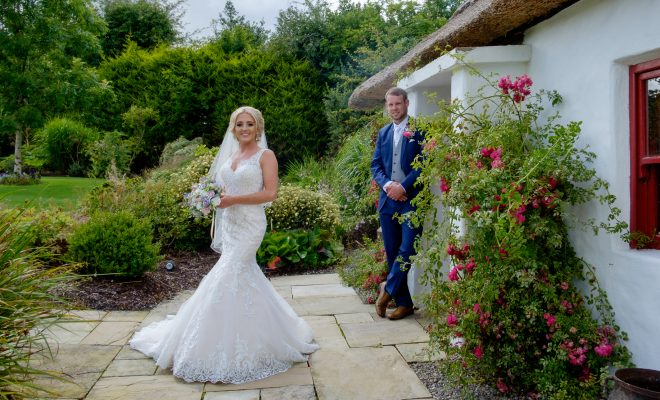 Beautiful music which echoed through the chapel, and a personalised Mass to remember their loved ones gave Ciara Aitken and Chris McCarron an emotional yet perfect wedding day.

The pair were wed at St Mary’s Church, Melmount, Strabane on August 4, 2017 in a ceremony performed by Fr Michael Doherty. Their reception took place in the tranquil Villa Rose Hotel and Spa in Ballybofey – a place they chose due to its gorgeous large rooms which were lit up to perfection, helpful staff who paid meticulous attention to detail and its outstanding food.

Ciara, who is a special needs teaching assistant from Strabane first met Chris at the Daly’s filling station in Lifford in the Summer of 2009. As his job was a fuel attendant, Ciara joked that she was casually calling out there ‘every now-and-again’ with her friend, Tracey in the hopes of grabbing his attention.

“We eventually made contact in Katy Daly’s nightclub in Strabane one night, and that was us from that night on,” Ciara explained. “We got on so well from day one – we just loved spending all our free time together. “Although, others said we would never last as we were like chalk and cheese – he was so quiet and I was the complete opposite. “But look at us now – over eight years later, we’re married and all. All those trips to Daly’s were worth it!” she laughed. 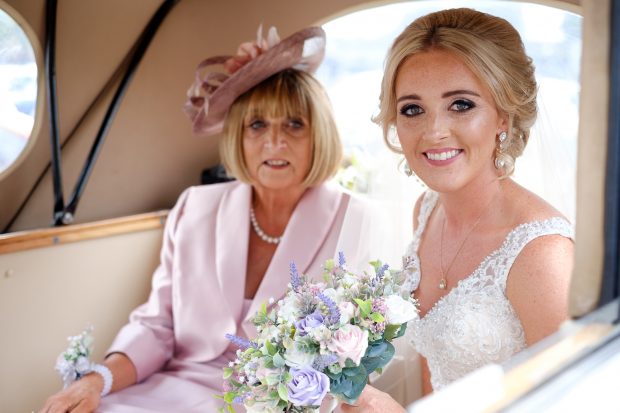 Ciara McCarron (neé Aitken) alongside her beloved mother, Kathleen who walked her up the aisle to a song called ‘Carrickfergus’ – a favourite of Ciara’s late father, Dave.

Together for six years, it was on October 27, 2015 that the Lifford man got down on one knee… while Ciara was cleaning her house in her pyjamas! “He was so nervous that he mumbled the words under his breath,” the Strabane woman reflected. “I went into shock, put the ring down and carried on cleaning my house and came back to it about 20 minutes later and realised it was really happening.”

Ciara’s white gold ring featured a cluster of diamonds set in the centre of a sparkling diamond-encrusted band. “I probably couldn’t have picked anything nicer,” Ciara said. “Later I got hold of my mum to tell her the good news. “She had travelled to Dublin that day, and she was squealing in the bus station there!”

Ciara’s entire outlook on weddings changed once she was tasked with planning for her traditional day. “I began taking in every little detail of other weddings from the moment I got engaged,” she described. “I knew I wanted to make as much as I could myself as I’m quite creative.

“I maintained from the start that I didn’t want to fall in with all the modern wedding décor, light up letters, photobooths and dance floors, so I kept things very traditional.” She added, “I found flowers very difficult to chose as I never liked them. “I even searched the internet for alternatives but didn’t find anything appropriate, until I found a Facebook page that specialised in artificial flowers. “Now I have my bouquet to keep in my memory box forever.”

Unfortunately for Ciara, her wedding dress shopping got off to a rocky start. “I saw a dress sale on Facebook and decided to give it a go,” she explained. “I wouldn’t recommend it for a first trial as you don’t get the same reception or one-on-one consultation with expert advice.”

Feeling downcast and disappointed, Ciara decided to leave wedding dress shopping for a while – until she went to a bridal fayre with her mum in the Villa Rose Hotel and discovered Ronald Joyce dresses. “I became obsessed with the designer,” she said. “I began googling bridal shops which held their collection, and made an appointment with McElhinneys in Ballybofey. “I found my perfect dress there, but was so nervous to admit that it was the one.”

Ciara’s champagne-coloured gown featured a flared shirt, delicate lace and sparkles which caught the light. “I wish I could just put it on again now, chatting about it,” she said.

When her wedding day arrived, Ciara said it felt surreal – and though she was calm as she got ready with the girls, her nerves kicked in on the way to the church.

“My dad sadly passed away when I was 19, so my mother walked me down the aisle to one of my dad’s favourite songs, ‘Carrickfergus’ where he was originally from,” Ciara said. “This was my way of including him in my special day. I relive that moment and smile every time I hear that song now.”

She added, “Unfortunately my aunt passed away a few weeks before the wedding so it was a day full of mixed emotions for us all, but we didn’t forget to include the loved ones we had lost in our day like we promised. “The service was lovely and our music, which echoed through the chapel, was beautiful. Before I knew it, Chris and I were husband and wife.”

The 30-year-old concluded, “We absolutely loved our wedding day, and we can’t thank all our family and friends enough for making it so enjoyable. “If I was to do it all again, I wouldn’t change a thing. It was perfect from start-to-finish.” 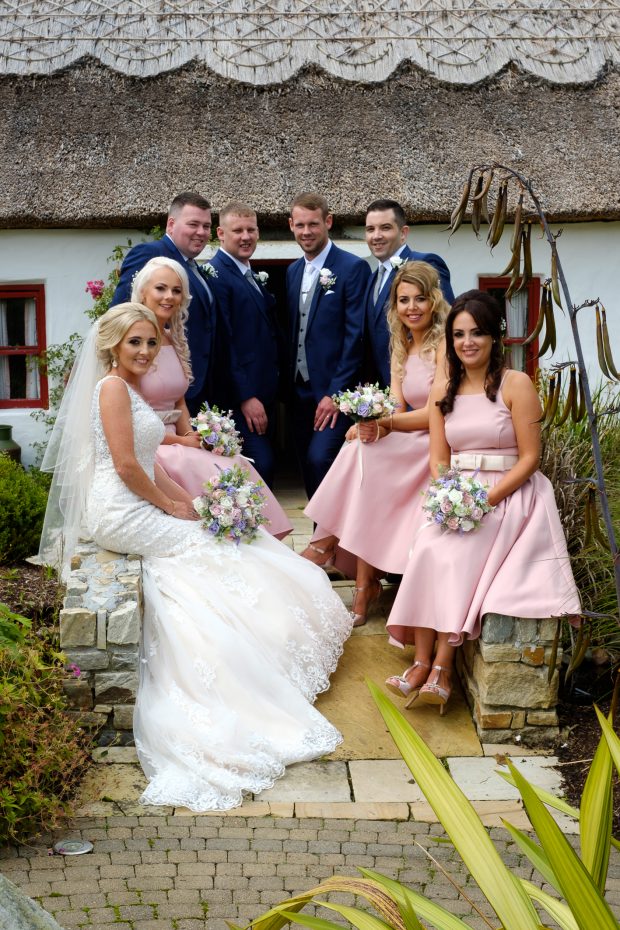