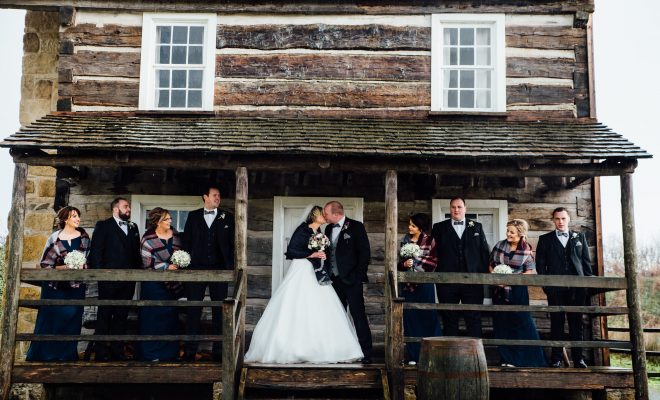 A sparkling winter wedding in Omagh, made magical by snowfall and beautiful music, gave Sharon Adams and David Trimble an amazing day from start-to-finish.

The pair were wed on December 29, 2017 at Mountjoy Presbyterian Church in a traditional ceremony performed by Rev Jonathan Cowan. Their wedding reception took place in the Silverbirch Hotel in Omagh – a place the newlyweds chose due to its first class service, brand new function room and its close-to-home location.

Sharon, who is a nurse from Omagh first met Jonathan, a refrigeration engineer from Clogher, in Una Vita (Main Street, Omagh) the week before Christmas in 2012. She was drawn to his kindness, his generosity and ability to always make her laugh. “We dated a few times in January 2013 and it fizzled out,” Sharon recalled. “We then crossed paths again in June 2014 and got chatting again. We went out on a date in July and we have been together ever since.” 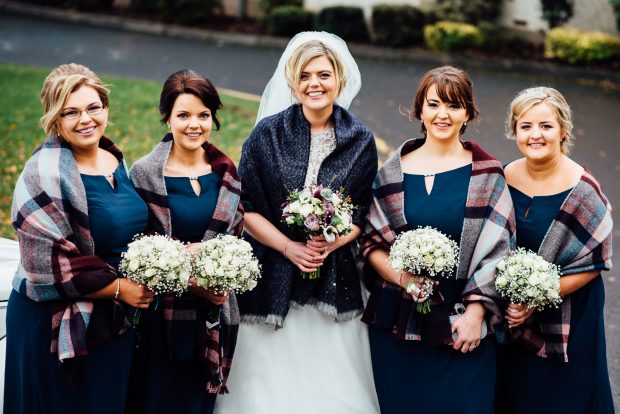 It was during a picturesque skiing holiday in February 2016 that Jonathan asked the Omagh woman for her hand in marriage. When doing so, he presented her with a beautiful platinum engagement ring which he had picked out himself. The ring, which fitted Sharon perfectly, featured one large diamond in the centre, and seven smaller glittering diamonds running across either side.

Before the proposal happened, Sharon recalled, “I’m not a great skier, and two to three hours a day is enough for me. I like a day or two off the slopes as well. “So on the Wednesday of the holiday, I remember getting tired and feeling sore, but Jonny wanted me to go up the slopes to ski even for just an hour. I refused to go – and while he did persist, I wasn’t for giving in! I was happy to sit in the coffee shop with a hot drink until he went up and skied for an hour or two. 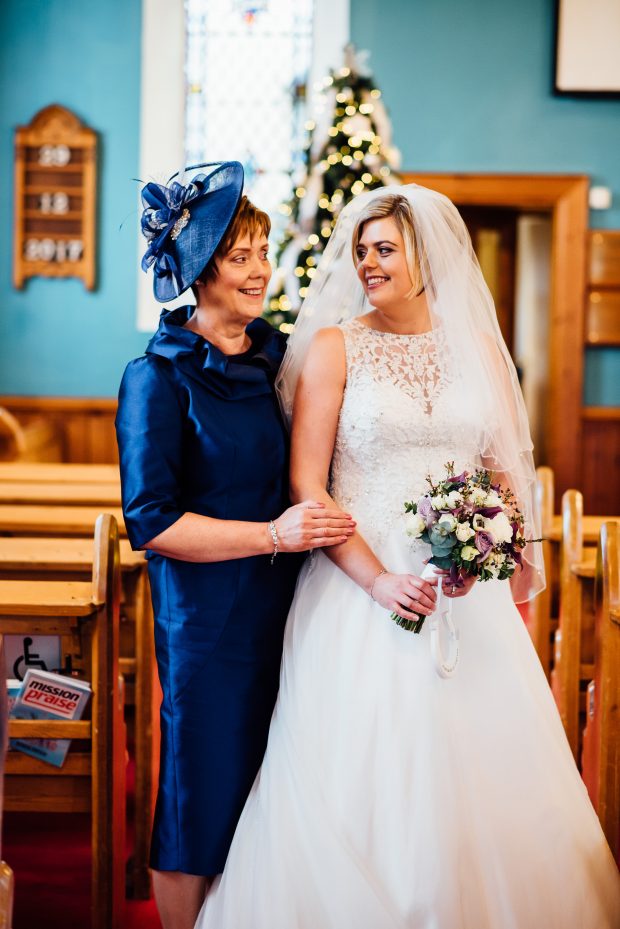 “Once he came back down, he again tried getting me to go but I was still having none of it.” Sharon added, “So we came to an agreement that we would go to the spa in the hotel for the afternoon. We got into the gondola to go back down to the village. I got in first and when I sat down and turned to say something to Jonny, he was beside me, half on one knee, with a ring and he asked me to marry him.” It was a romantic moment that stopped Sharon completely in her tracks. “I was so shocked at the proposal as I was not expecting it,” Sharon reflected. “I knew we would get married some day, but I never thought for one minute that he would have proposed when we were on holidays. I was happy, excited and couldn’t wait to tell everyone.” 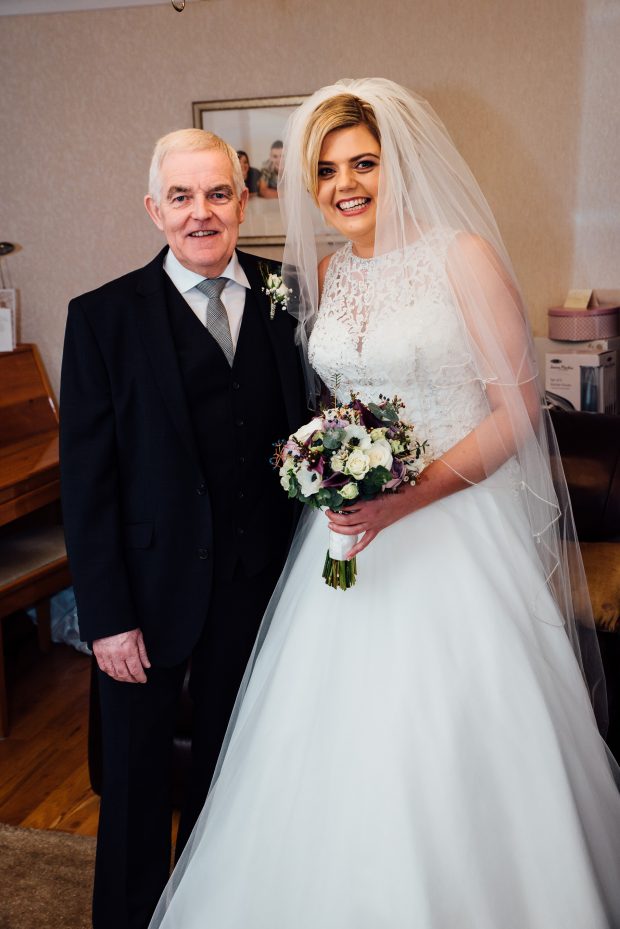 The new Mrs Sharon Trimble with her father, Keith.

With a traditional wedding at the forefront of her mind, Sharon also had her heart set on a winter wedding with a ‘sparkle’ theme and navy bridesmaid dresses. Describing wedding dress shopping as ‘good fun’, Sharon visited a number of lovely shops with her mum and a few close friends – however it took them approximately two months to find the right gown. After narrowing the search down to two dresses, Sharon eventually fell in love with an ivory gown from Serendipity in Fivemiletown. “It had the wow factor, with the sparkle at the top and the detail down the back,” Sharon said. “There were buttons down the back and then the detail that followed on down to the train was amazing. “I absolutely loved it and didn’t want to take it off!” 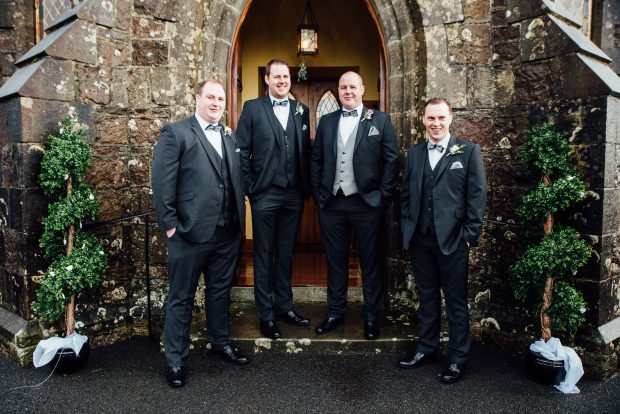 Groom Jonathan Trimble is all smiles with the boys on his wedding day.

When Sharon’s wedding day arrived, she couldn’t wait to marry Jonny. “I was looking forward to the day and I was excited to walk down the aisle,” she recalled. “During the service I was a little nervous, but Rev Cowan did an amazing job. Our ceremony was absolutely lovely and very simple. He made it funny, light-hearted, and very laid-back. He made us all feel at ease.” Sharon added, “The pianist, Stuart Watson, was also amazing, and the songs for walking up and down the aisle were fantastic. 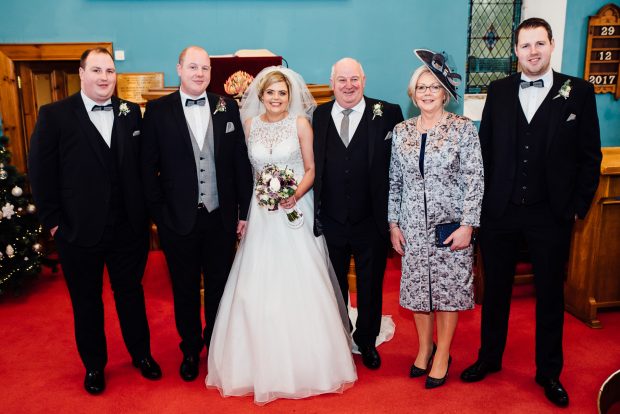 Jonathan and Sharon Trimble alongside their loved ones on the day of their winter wedding.

During the signing of the register, Jonny’s cousin, Andrew played the saxophone along with Stuart accompanying him on the piano, and it was just beautiful listening to it. Our wedding day was amazing from start to finish, and all my planning paid off,” the 33-year-old concluded. “It may have rained all day and there was snow in the evening, but Gemma the photographer, Bob the videographer and Dorothy in the Folk park, were absolutely fantastic at ensuring the weather didn’t ruin anything. Overall, our wedding day went by without a hitch, and we just loved the day.”