Our blogger Vanessa Pope is on the countdown to her big day in Spain, follow her journey with North-West Brides

You know that saying about waiting ages for a bus and then three come along at once? Well, my experience of wedding planning has been exactly the same. Weeks go by during which I don’t give it a thought, okay you got me, I’m pretty much always thinking about it! Let me rephrase, weeks go by during which nothing wedding-related actually happens, then there are weeks like the last few, during which it’s all go go go!!
Since I last wrote, we’ve had our second visit to Spain to finalise details ahead of September. This has been something that I had been looking forward to almost as much as the wedding itself – I had the countdown app to prove it! Seeing as it had been over twelve months since we last visited the town where we will say ‘I do’, there was always the concern that the place might have been subjected to a zombie apocalypse, a Godzilla attack or even an alien invasion, you know all the usual things that any normal bride worries about.
Thankfully, we arrived to find Nerja exactly as we left it, beautiful and kissed in glorious April sunshine. Eager as we were to settle into holiday mode, cocktails, a deckchair and sunscreen, not necessarily in that order, we had to remember we were there on wedding business! We did after all, have seven appointments to keep over our four days. 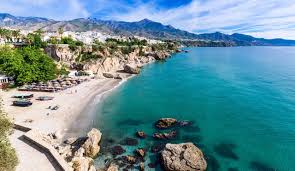 With no rest time for the wicked, we dove straight in with our menu taster. Oh ladies, to those of you left to trial your reception menu, I am so jealous. It was an absolutely wonderful experience being plied with multiple meals and side orders, not to mention alcohol, without having to part with a penny, is worth getting married for in itself! We ate until our bellies ached and made notes to make it look like we knew what we were doing. Great craic altogether. The staff were fantastic and made us feel so important that we knew we’d made the right decision by choosing them for the big day.
Over the next four days, Mr Brady had to be left to his own devices while I had a makeup, hair and tan trial. Makeup and hair went brilliantly, I was transformed but managed to still look like myself which may or may not be a good thing! Tan trial wasn’t as much of a success. With absolutely no harm to the girl who applied it, I think I’ve had to finally accept that my skin is to tan as mud is to an aul welly boot. I was caked in the stuff and the look was not good. It went into every crack and line it could find and made me feel like I’d been on an extended stay at Glastonbury. Me and my skin must admit defeat on this one – I’m pale as flour and proud! 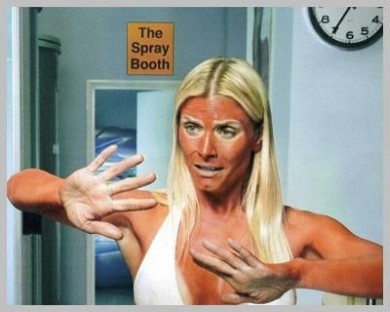 We also met with our brilliant photographer, Bob Long. Now having signed up for Bob without actually meeting him, there was always the fear that we might not “click” but I needn’t have worried. Bob is a gent and we immediately felt comfortable around him. Whether he would say the same about us is another matter entirely. We had questions, so many questions. Bob answered them all easily. Another decision we are delighted with. Look at us, could we BE any smugger. If you’re hating me, read the spray tan bit again. There you go.
We also had an appointment with our florist – who we’d also chosen without having actually met. Inma, having very little English, was met with the daunting task of having to compile a flower order with two people who have very little Spanish. Thankfully, our wedding planner Sonya, had left us in the capable hands of her colleague Patty who was able to translate both the Spanish and the “flower speak”. Baby breath – a flower and not the smell of liga – who knew?! So flower order compiled and committed to print, our last meeting was with the main woman, Sonya. 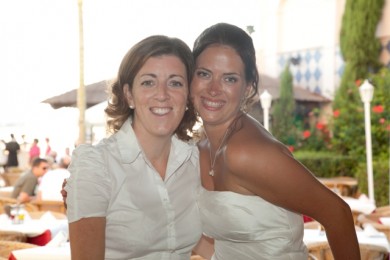 Sonya spent an hour and a half running through the entire day, from breakfast to the last man standing, she has every base covered and is utterly in control of our wedding. Like a drill sergeant, she knows who will be where and when and why. She’ll also spot if anyone is where they shouldn’t be asking a barman for something they definitely shouldn’t be. She will ensure our venue is decorated to our liking, you know, zombie and Godzilla posters, the usual stuff, and she will be on the lookout for anything that might go pear shaped. She pretty much has every single aspect of the day under her meticulous control leaving me to worry about only one thing: how to get rid of holiday weight? Totally worth it.