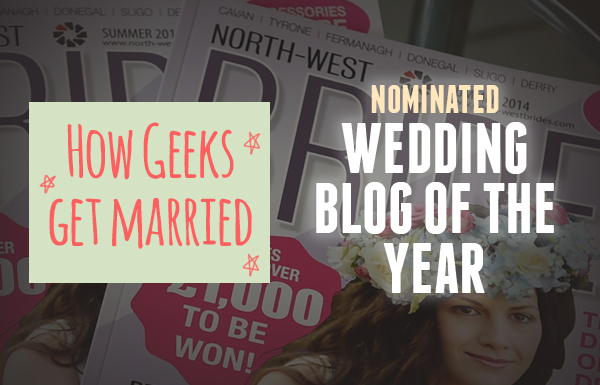 ‘How Geeks Get Married’ on wedding blog shortlist

Ever wonder how geeks get married?  Local couple Catherine Morris, Omagh and James Muldoon, from Aughnacloy, have been writing about plans for their wedding day through their blog, ‘How the Geeks Get Married’.

Their on-line blog, which has around 20,000 followers from all round the world, has now been nominated for Cosmopolitan magazine’s ‘best wedding blog’.

Their blog has also been featured the UH’s sister publication, North West Brides.

Catherine explained how “shocked” the couple were to be nominated for the award.

“It just came as a complete surprise.

“I had logged onto Cosmopolitan to vote for my favourite blog by Rock and Roll bride when suddenly I came across my own blog!”

A friend of the couple had originally told them about the competition and encouraged them to enter. The couple nominated themselves but didn’t even expect to get shortlisted.

Their blog is totally ‘unique’ in the category as the bride-to-be explained, “We are the only Northern Irish couple in the category and we are different in the sense that we are blogging about our experiences with wedding planning – the rest of the blogs are either just brides-to-be or brides that have been recently married, not a couple.”

Having got engaged last November the couple have rarely stopped organising for the big day ahead, in three months time.

Catherine said, “ can’t believe how quickly it has went in. It’s crazy with so many things still to organise.”

Catherine is convinced that James is the “biggest pull” to the blog as she believes people like to hear a man’s opinion on the planning.

“He’s a bit of a Romeo and he does do nice things for me” she remarked.

The couple now have thousands of followers who keep tabs on all their planning in the run-up to the big day.

“People have messaged us from Australia and all over the world,” said Catherine.

“James even gets noticed on the street and different people have asked him for advice on how to propose to their girlfriends!”

“Keep voting for us!” Catherine pleaded.

People can vote for the couple by logging onto the Cosmopolitan website cosmoplitan.co.uk or by entering http://tinyurl.com/votehggm.