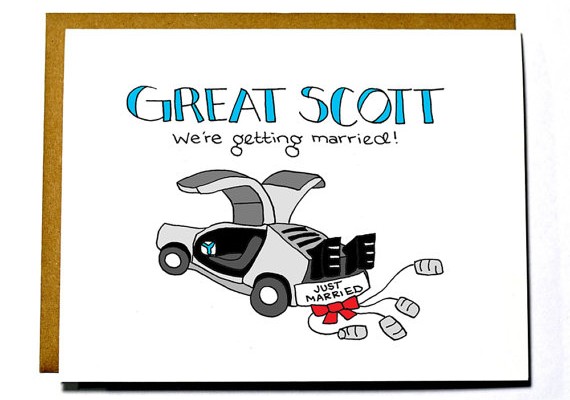 Great Scott! Bride to the Future!!

So, not unlike the manner employed by Kate and Wills of British monarchy fame, we have announced the date for our impending matrimonial extravaganza. I am having the craic of course – we’re getting hitched, tying the knot, getting fitted for our ball and chain, jumping the broom on the 10th September 2016. Most people were fully aware of this piece of news already via the modern day phenomenon that is the mouth of me, but nonetheless we thought it best to act like Americans and send out ‘Save the Dates’ anyway. Given that our wedding is taking place abroad rather than down the road, across the field and around the corner, we thought it might be wise to give people a good bit of heads up so as, if they want to join us, they can book their flights, look into accommodation and soften Mammy up to take the kids or, if they’d rather not, they can think up a really good excuse, spend themselves into bankruptcy or if all else fails, give birth to kids and use them to get out of it!
Thankfully, lucky pups that we are to be surrounded by wonderful friends and family, the reaction to our ‘Save the Dates’ was massively positive and excitement-filled. The cards themselves were intended to look like luggage tags and Mr Brady and I are very proud to say that we designed and made them ourselves. Let me tell you, there is no better test to the strength of a relationship than sitting across a kitchen table and embarking on a craft project. Be careful with the scissors indeed! Needless to say we survived to tell the tale and although we may be finding glue on the ceiling for years to come, the wedding is most definitely still on. Hoorah!

Along with the ‘Save the Dates, we (and by ‘we’ I mean not me but him) have also gone and created one of those “wedding websites” full of a whole hape of information the sheer volume of which will render our guests more than able to invade the country of Spain if the notion so takes them. We’ve put in details of everything from accommodation, to tourist attractions to nearby water parks, while simultaneously keeping the finer details of the day itself firmly under wraps (rubs hands together and giggles). Putting the whole shebang together has been loads of fun and has made us even more excited for our big day. Massively excited. For one day. Twelve months from now. Agggggges away!

I’m told I won’t notice it going in. People tell me that once the year mark comes and goes it’ll be one long whirring blur of dress fittings, menu tastings and flower scouting missions, with Christmas thrown in and before I know it I’ll be standing at the altar trying not to laugh or worse to cry and I’ll be spluttering ‘I do’. The day itself, I’m informed with ominous warning glares, will go in so fast my head will spin clean off my shoulders. Like the village of Killygordon, if I dare to blink, I’ll most certainly miss it. So, I’ve decided to slow down and smell the taffeta. It may be the best day of my life but this is the best time and there’s a whole year’s worth of looking forward to enjoy. Maybe I’ll start checking my countdown app once a week instead of twice a day. Maybe I’ll slow down on the organising and save some for the new year – sure I wouldn’t want to be bored and I’m sure I’ll have loads of money for things in January(!) One thing’s for certain however, on the 10th September 2015, I will undoubtedly cast a thought to a year ahead and wonder what I’ll be doing and where I will be. I’ll wonder if the hairdresser succeeded in making my hair somehow presentable. I wonder how beautiful my bridemaids will look and which one of them will perform impromptu karaoke first and how early. I’ll wonder if I should take bets on that and how much money I could make. Not for the first time, I’ll wonder if we will get our sunshiny day and what it’ll feel like to finally call myself Mrs. Brady. And lastly, I’ll wonder why the hell I have to wait a year for all this and where on earth in Doc Brown when I need him?!