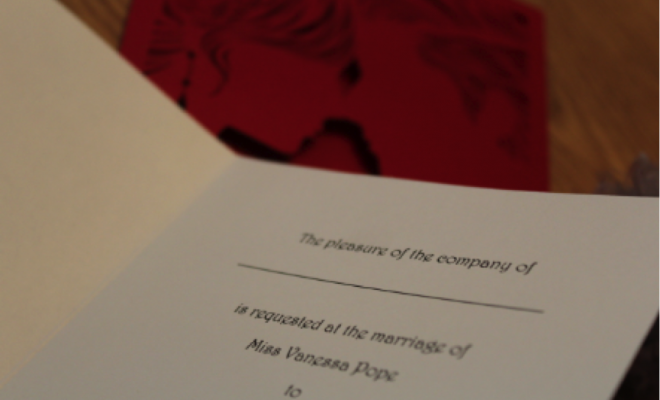 Taking yet another step on the path of “this is really happening” we have managed to get our wedding invitations together and out into the world over the last week! I’ll be honest and say the whole invitation process has been one of my favourite parts of the wedding organising so far. From collecting the box of invites from the post office and racing home to open them like an overexcited puppy, to spending absolutely ages deliberating over precisely what colour pen we should write them in (yes I can be that much of a Monica) the entire thing has been craictastic and I’m genuinely sorry it’s over.

Although we are still almost six months out, as it’s a destination wedding, we thought it best to send them out into the world a little earlier than what might be considered usual – also please see paragraph one and aforementioned “overexcited puppies”.

We started off hand delivering to immediate family and bridal party. Though this was massively exciting, it was also a little nerve wracking as we were actually there to watch guests open their invites. There’s always that little fear that they’re going to rip it up/put a match to it/use it to write down their shopping list while we sat there in front of them crying our little hearts out.

“As in Spanish Spain??! I don’t think so. What’s the Spanish for having a laugh?”

Mercifully, we had no reactions like this and our invitees welcomed their invites with enthusiasm and excitement. There were many, many mentions of how it will “be great to see the sun again” and “can you not bring it forward to next Tuesday?” I wish folks, I sorely wish!

Our remaining invitations to those family and friends that live further afield and you can understand “further afield” here to mean “further that we were willing to walk/swim” were posted on Sunday past – a fitting way to spend Valentine’s Day afternoon we thought!

I’ve said it before – the road of wedding planning is fraught with loads of little “woo” moments. Having multiple excuses to drink champagne – woo! Choosing your rings – woo! Buying your dress – woo woo!! Seeing your name on a wedding invitation in print rather than written on the top in a carefully chosen gold pen – woo…wow marriage me? Wow. 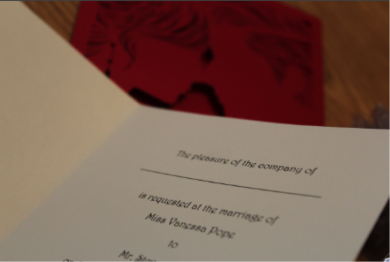 There is something about seeing “the marriage of Vanessa Pope” to really remind you what is at the heart of all this planning, fretting, organising and fretting – a real life marriage and not just a wedding! In that respect I did include with our invites a wee poem penned by yours truly illustrating that very point to our lovely guests. Entering poetry in the Olympics this year didn’t you know?! 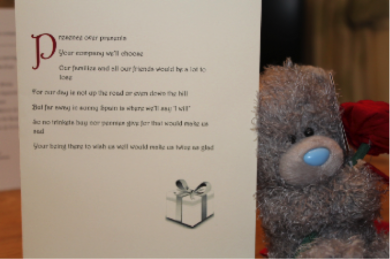 Don’t worry, I’m not about to go all soppy on you all. Yes the marriage bit is important and deserves its recognition – but I’m obviously still all about having the very biggest of the very fattest Spanish weddings!

So with this in mind, we’ve been thinking a lot about what we can do to make it bigger and fatter. Obviously the Spanish bit is taken care of what with it being in Spain and all. I paid attention at some geography classes I’ll have you know! There are however many other “extras” being used by couples to make their wedding stand out these days. The sweetie cart and photo booth are good examples of things that are now commonplace at modern weddings. I’ve enjoyed myself with both! You’ve not known true bliss until you’ve eaten yourself into a sweetie cart coma – just a little FYI.

So being ever the weirdos that we are, we are taking these common aspects and striving to make them a little more “us”. Of course, I can’t go into too much detail here – eyes they do be a reading! We can only hope that the day we’re planning is as unforgettable for our guests as it will be for us – move along no soppiness to see here!

Related Items
← Previous Story Poll: Leap Year Proposals – Would you, could you, have you?
Next Story → Bridal Boot Camp