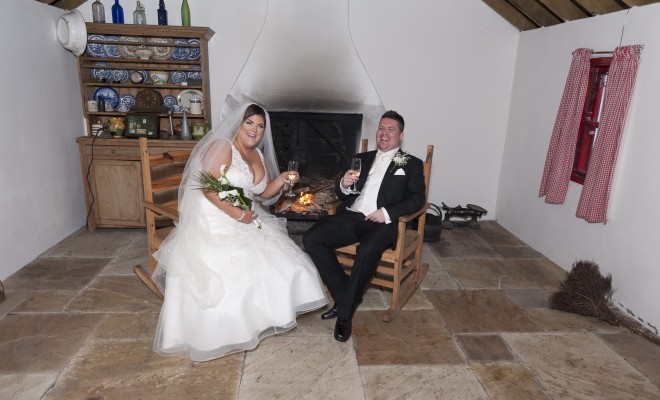 When Joanne Potts first met Darren Arbuckle in a Strabane bar on March 2, 2013, she didn’t realise that he would soon become the love of her life. After feeling a spark when they began dating straight away, the pair have since dedicated the rest of their lives to each other and married on December 11, 2015. 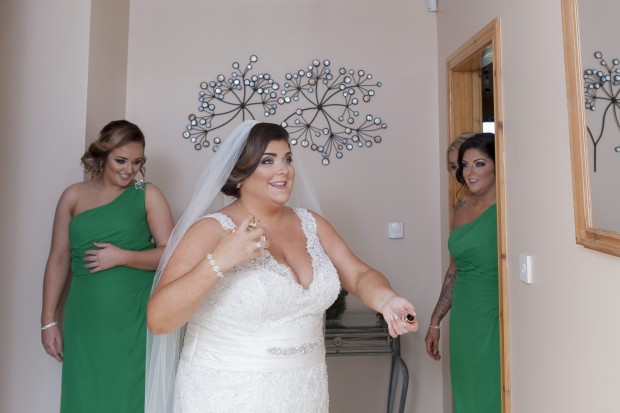 The blushing bride is all smiles on the day of her wedding.

Their beautiful ceremony, which was held in St Columba’s Church, Donneyloop, was celebrated by Fr Michael Porter. Together for a passionate nine months, it was on a chilly December evening, five days before Christmas, that Darren (30) asked Joanne (30) to be his fiancée.

Getting down on one knee, the Clady man presented his love with a sparkling white gold ring, featuring a diamonte band, and topped off with an eye-catching square stone. “Darren totally surprised me,” Joanne said. “I didn’t have any idea that he was doing it.

“I was in total shock, but once it had sunk in that I was engaged, the tears started. “But it was all happy tears!” she laughed. Tackling wedding planning in record time, within three days of the proposal Joanne had set the date of her big day. “I think we wanted to keep our wedding more traditional,” Joanne explained.

“I didn’t have any colour scheme or flower style in particular in mind when I started planning, but as time went on, everything just fell into place.” Though worried that wedding dress shopping would be stressful, Joanne found her perfect gown in the first shop that she visited.

Trying on five dresses in McElhinney’s, Ballybofey, she soon realised that dress number three, flaunting subtle ivory lace and a long, sparkling veil, was the one for her. “I did a lot of research of dress styles and designers to see what I actually liked before going to try anything on,” Joanne explained.

“Though I had booked five appointments in all different shops, I knew I had found exactly what I wanted. There was no need to look any more.” With the help of her wedding co-ordinators, the bride-to-be then secured the Villa Rose Hotel, Ballybofey to host her wedding reception. “When I went to view it as a possible venue, I fell in love with the layout and décor of the place,” she said.

When Joanne’s big day arrived, the blushing bride described feeling a mixture of different emotions before being wed under the watchful eye of her 160 guests. “There were a few wee moments of tears but overall I was just so happy and excited,” Joanne described. 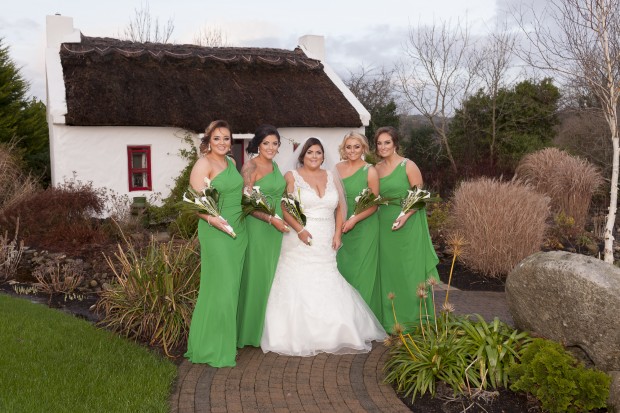 The new Mrs Arbuckle is joined by her maid of honour, Janine Potts, and bridesmaids, Emma Hannigan, Lisa Patton and Jade Arbuckle.

“The week prior to our wedding, the road to the chapel was flooded so I didn’t think it was going to go ahead. “But on the day, the sun was out so we were very lucky. It was also fantastic to get our photos taken outside – even though it was freezing!”

After being whisked away to the Villa Rose in a classy car, it was soon time for the newlyweds to tuck into their eye-catching three-tier wedding cake. Baked by Truly Scrumptious, Omagh, the party-piece was laced with diamonte details and featured pretty peonies made from icing.

Then with Derry wedding band, ‘Superstitious’ setting the atmosphere, the new Mr and Mrs Arbuckle were in for a night of music and dancing. “Our first dance was ‘Everlong’ by the Foo Fighters,” Joanne said. “That’s Darren’s all-time favourite song.

“Our wedding day went so well – there was so much buzz on the day,” Joanne concluded. “We stayed up pretty late, but it was great to spend time with family and friends. I can’t believe it was four months ago!”