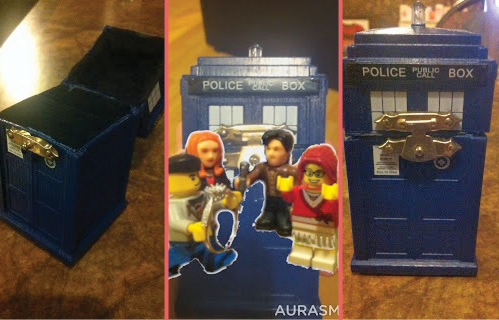 So we left of with James carefully considering the ring and how to secretly size it. This week our ‘old fashioned guy‘ asks for permission from the Father of the Bride-to-be to take daughters hand in marriage. 🙂 and of course a plain everyday ring box will not do…

A few weeks before Christmas events started to gather pace.

I go pick up the ring. Very fun to do. I have to admit that there is a certain swagger that comes along with it. The best way to describe it is that it felt right. However there was something that just wouldn’t do… The ring box! Yes it was pretty and yes it showed off the ring nicely but it just wasn’t me or Catherine. I would expect more from me, so Catherine would get more than she expects.

Now it is handmade and from America so this will take time. Something I did not have… So I decided to give it a go myself. The clock was running out I had less than 30 days to go, but I had managed to load on another project.

I settled on a TARDIS replica model about the size of my hand.
First step saw TARDIS in half to check if it was indeed hallow and able to hold a ring (It was)
Step 2 Admire handy work of being able to saw a TARDIS in half…
Step 3 PANIC!!! How do I keep this closed?
Step 4 Calm down, using a jewellery box hinge and latch I had created a TARDIS Box. Lastly finish off with black felt and place inside a ring holder and WOLLA.

It was perfect. My thing I loved most about the box and that I knew Catherine would love is that i attached an augmented reality image to it. This means whenever a phone camera hovers over the TARDIS an image will appear of LEGO me proposing (with the ring) to LEGO Catherine in front of the TARDIS, with LEGO Doctor Who and Amy watching us. I geeked out over this like mad!!! A simple app from the app store – Aurasma, but how cool! I knew it wouldn’t be part of the proposal but a nice idea to talk about and to remind her of the moment. 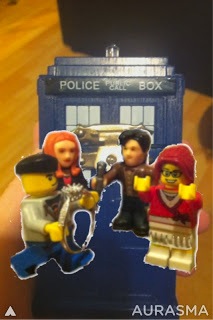 All that was left to do was the small matter of getting her father’s permission. I am quite the old school hopeless romantic in some ways so for me, it is only right like the gentlemen of old to obtain the father’s blessing. Liam is a great guy, friendly, funny and enthusiastic and Catherine’s entire family have always been very welcoming to me, treating me as an extension of their own family…which made it only slightly easier.

Catherine is away for business to an event in Dublin for the night. (side note: Our anniversary) it was time to talk to Liam… I had spent the day thinking of what I would say to him. But I settled on telling myself “the words will come to you”. Armed with this self assured mantra I jumped in the car and headed for Omagh. I was so relaxed just chilling out, listening to the radio without a care in the world, not worried about what was to come.

7 minutes later – 12 miles from Catherine’s house. Like a ton of bricks all at once NERVES!!! The voice in the back of my head says “you’re not seriously going to roll up to the house and have nothing to say!!! You are going to stand there with your mouth open and nothing will come out.” As soon as I had shook the nervous feeling I was there. Time to speak from the heart….
Knock knock,
James – “hello Liam…”
Liam – “hellllloooo James, come on in. Rosemarie is down in the front there”
James – “Well Liam I am here to speak to you….”
(Liam stands up, looks me square in the eye.)
…
(I motion to speak)
James – “I…”
Liam – “Before you say anything… YES!!!! Yes, yes yes”
(Courses of laughter)
(It must have been written all over my face)
James – (smiling wildly) “Just to make this official… I request your permission, for your daughters hand in marriage”
Liam – (smiling more) “yes well of course”
(More laughter)
It is at this point we both catch Catherine’s Mother, Rosemarie, out of the corner of our eye; Tearing up and smiling the happiest smile. We have a cup of tea and speak for a while as I catch them up on my plans. Not long to go. Both Liam and Rosemarie are sworn to secrecy. “Just two word… Adidas predators” a joke as last my last birthday Liam had let slip what Catherine had got me.

It was done; I got her father’s permission and now all that was left was to pop the question to Catherine…

That’s how to do it. 😉 When geeks get married we wouldn’t expect anything less than a Tardis ring box, and what an amazing keep sake to have in years to come. Next week we have the proposal, and what a proposal it is. 😉

Related Items
← Previous Story Evil Plans and Stuff…
Next Story → The Most Magical Place on Earth!