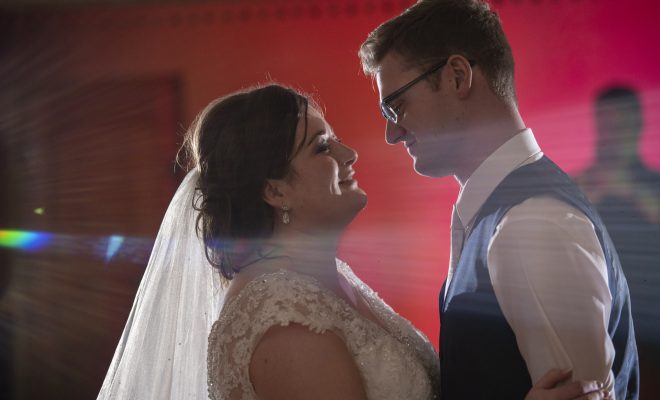 A romantic proposal within the floral paradise of Belfast’s Botanic Gardens transformed into a spring wedding that was exactly what the new Mr and Mrs Hutchinson wanted – but even better than they dared hope.

Indeed there wasn’t a cloud in the sky when Laura Smithson, daughter of Terry and Claire, and Philip Hutchinson, son of Trevor and Hilary, wed on April 22, 2019 at Mountjoy Presbyterian Church, Omagh. The service, joyful, emotional and perfect from start-to-finish, was officiated by the Reverend Jonathan Cowan of Mountjoy and Father Eugene Hasson from Drumragh Parish. 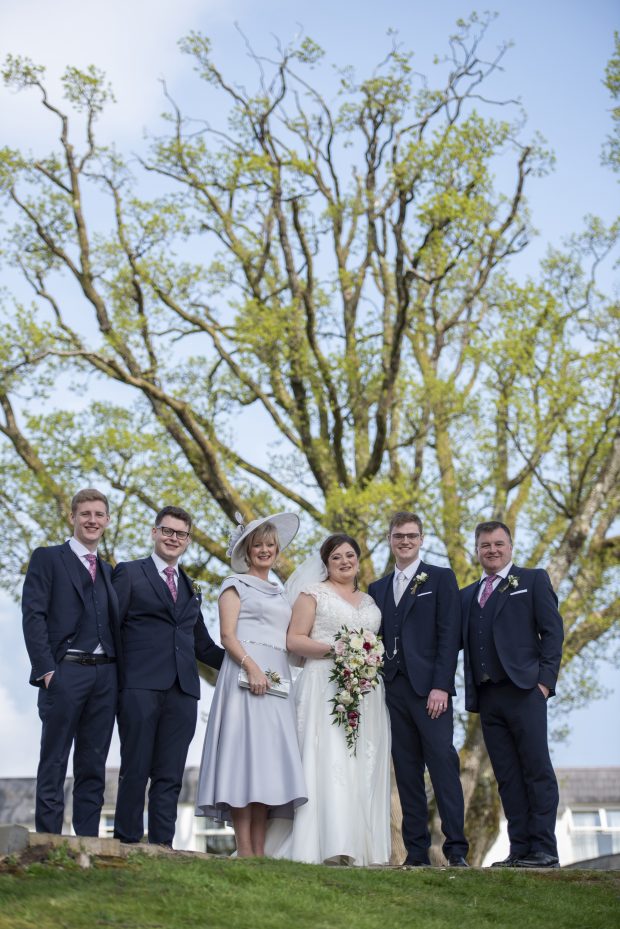 Laura, who is a learning and outreach officer at the Titanic Belfast from Omagh, first met Phil, a bank official, in August 2008 while at a house party, when she was 16-years-old. “We spoke a little, but I had a boyfriend at the time, so it was just a casual meeting,” Laura reflected. “I forgot about him until he showed up in my work in McDonald’s about 18 months later.”

The pair got to know each other as work colleagues, and enjoyed hanging out together. But then, in 2010, Laura found out that he was attending Queen’s University Belfast, where she was heading in September of that year. “He had completed a module in his first year that I ended up taking too, and we met up in September for me to buy the module texts off him for the princely sum of £15, and a Starbucks hot chocolate,” Laura laughed. “And we’ve been hanging out ever since!

“I liked him because he had that cool kid edge… Or so I thought. He’s a total softy!” She added, “He played guitar and wore Vans, and was clever and funny. He thought I was really nice and a bit of a geek. We definitely started out as friends which gave us a great foundation for a relationship down the line.” Laura pointed out that the pair had been ‘unofficially a thing’ before they began dating in 2014. And just a month shy of their three year anniversary, Phil got down on one knee on September 17, 2017, during a dander through the leafy Botanic Gardens in Belfast. 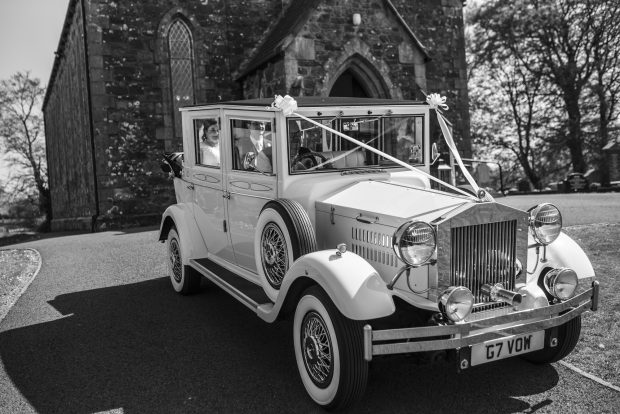 The newlyweds, Laura and Phil were whisked away from the church in a white 1930s Landaulette, a vehicle the bride said was ‘a dream’.

“I was delighted, and just so excited,” Laura smiled. “But I was also relieved for him because he seemed really nervous… As if there was any chance of me saying anything but yes, though!” Incidentally, Phil – who is originally from Ballymoney, but who has been in Omagh since childhood – proposed with a glittering white gold, three stone diamond ring that the pair had looked at together months prior.

“What I didn’t know is that the day after looking at the ring, he’d gone back to the shop and got it,” Laura said. “He then sat on proposing for a few months, waiting for the right time. “But it feels really lovely that my engagement ring is something we looked at and chose together.”

After a jam-packed weekend of touring the country to tell their parents and grandparents the fantastic news in person, within the first three weeks, the pair had their venue, band, photographer, videographer and florist all booked. “Because we had decided for a wedding around Easter time, we knew services would book up quickly,” Laura explained. 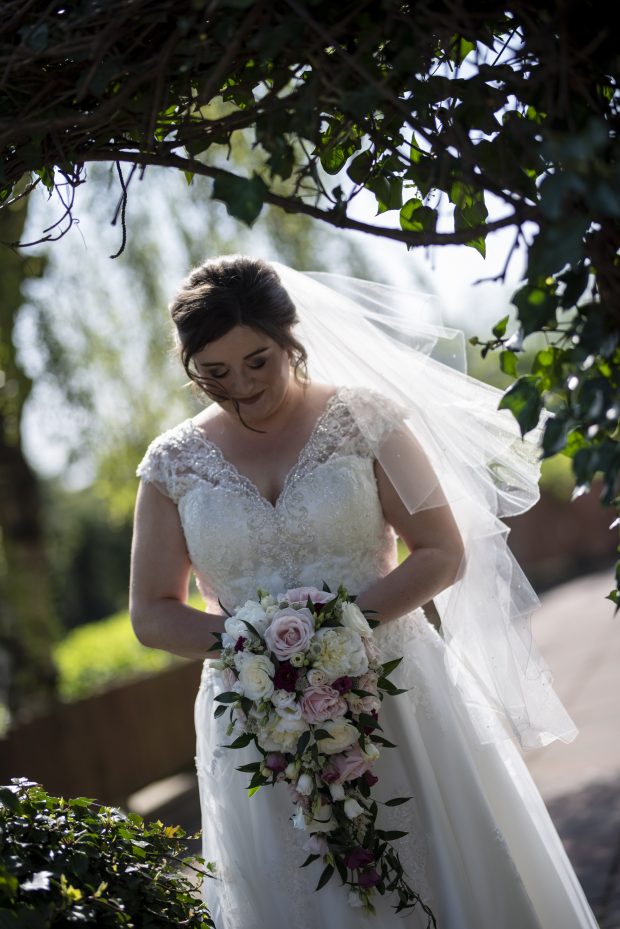 “We booked the Killyhevlin as we had attended a wedding there in the past, and knew their professionalism and timings were so good. This was important to us as we wanted a really well-run day which was easy and flowing. “It had the added bonus of a beautiful space for photographs on site, with the trees and the lake!”

For Laura, shopping for her wedding dress was quick and easy – and she also ‘had the best time’! “My perfect gown was the second dress I tried on in the first shop,” Laura said. “I still kept another appointment just to make sure there was nothing else for me, but I knew pretty much right away it was the one.” The gown in question featured a classy A-Line design, a full skirt made of shimmering satin and tulle and a glimmering lace bodice. It was purchased from Chantilly Lace in Enniskillen (which has now reopened on Bridge Street, Omagh as ‘Off The Peg Bridal’).

“It really felt like a proper gown,” Laura said. “It was easy to move in, comfortable and sparkled like anything in the light. “I chose the dress because I wanted something that felt like me; it was a shape that looked good on me, and I was pretty sure I could boogie on down in it!” She added, “Sharon, who worked at the bridal boutique, was so supportive and great fun, and made the experience incredibly easy for me.” 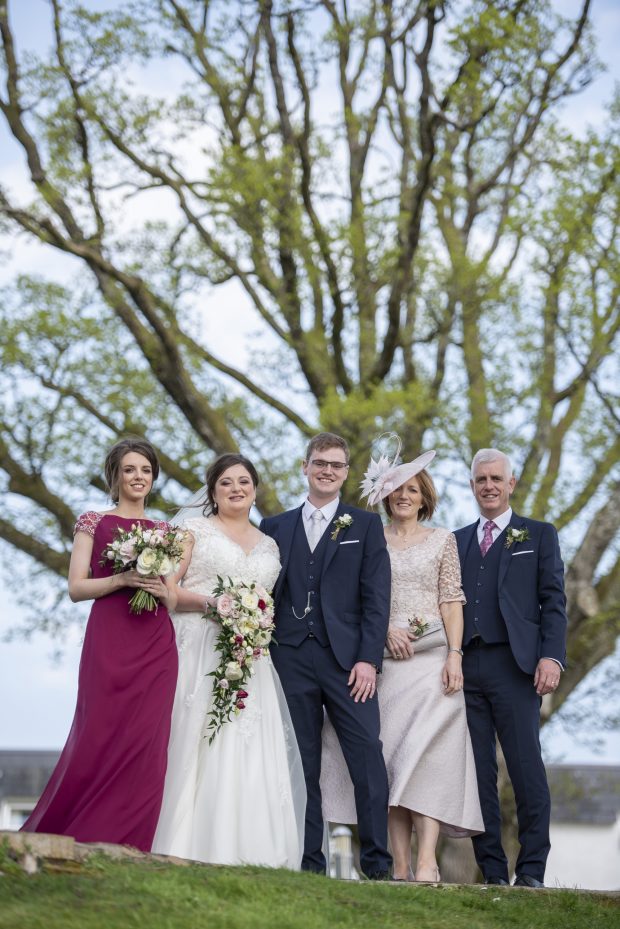 On the morning of her big day, Laura said that she was ‘the calmest in the house’, and Phil was pretty chilled out too! “I was just so ready after all our planning to make it all happen,” Laura said. “The weather was also out of this world, which was surprising for April. There wasn’t a cloud in the sky all morning, and I think it hit the low twenties.”

Laura was whisked away to the church in a dreamy white 1930s Landaulette hired from Glendale Limousines, and described her wedding ceremony as ‘perfect’. “Our service was so warm and fun, joyful and memorable,” Laura recalled. “For us, the whole thing was emotional, and there was hardly a photograph or video that doesn’t have at least one person dabbing their eyes or their lips wobbling.

“Daddy giving me away was also tight going, and my brothers were weepy when I walked up the aisle, which was so cute,” Laura continued. “I think everyone was just caught up in the love and the moment, and the music provided by Marie Fox just set everything off so beautifully. “I would say that our wedding day was exactly as we wanted, but it was even better than we had dared to hope,” Laura described. “It was just perfect for us and we loved and remember every minute.”

Laura and Phil have extended their sincerest and more heartfelt thanks to every service that looked after the pair on their day. “We were in the safest hands, and thanks to their skills and professionalism, we didn’t even have to think about it,” the 27-year-old concluded. “We’d also like to thank all our families and friends for being with us for such a special occasion, and for celebrating the day with such joy. It really was a very love-filled day, and we’ll never forget it.” 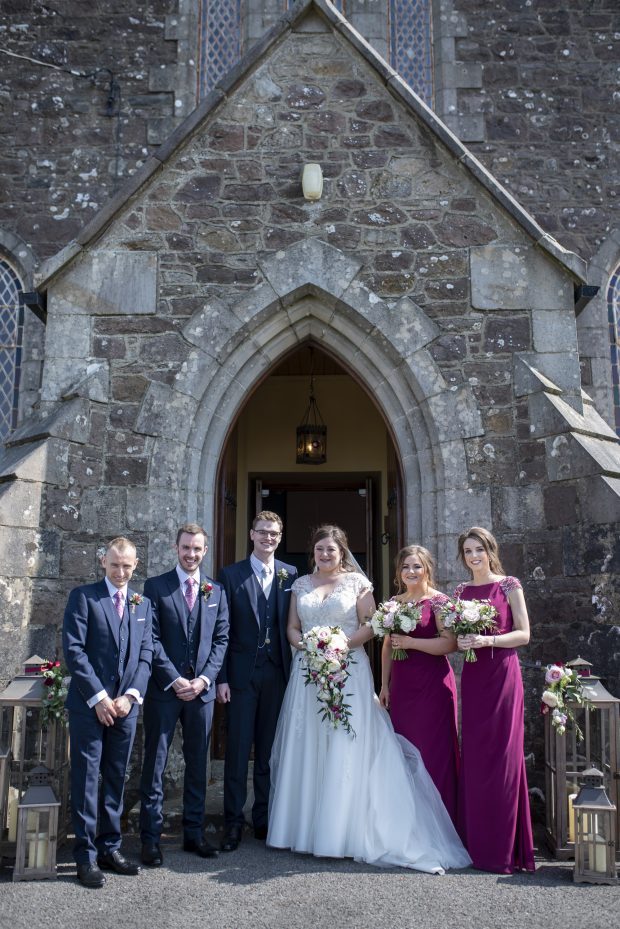 Related ItemscakeCeremonyengagementflowersmusicproposalreceptionringvenueweddingWedding dress
← Previous Story Families at War: How to Deal With Family Hostilities Before Your Wedding
Next Story → 10 Important Jobs That Are Perfect for the Mother of the Bride