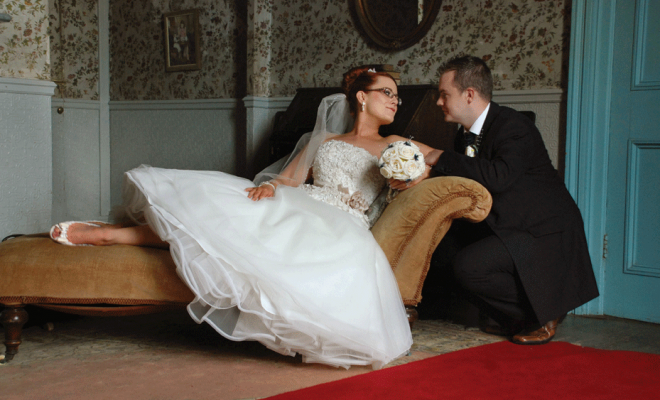 Five years to the day after a chance meeting on a night out Louise Madden walked down the aisle to tie the knot with her groom Davin McSorley. 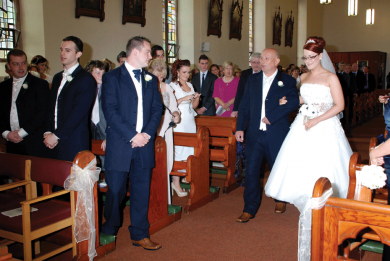 In a day which was vintage through and through the happy couple mixed their individual style with traditional vibes to create their dream wedding. 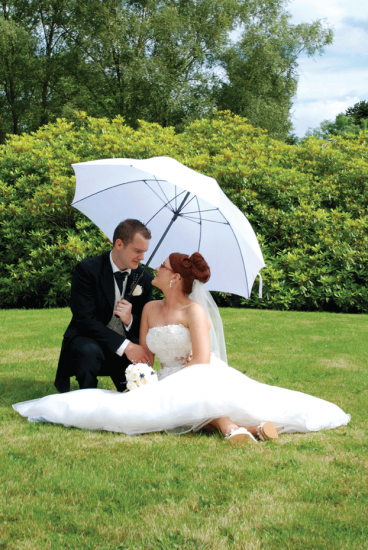 Looking back on their first encounter Louise laughs when she recalls how it was a chance meeting outside a takeaway in Magherafelt where they first felt a spark. Although Louise knew a friend of Davin’s this was the first time she had met her future husband – and from this random first encounter Louise and Davin never looked back.
After dating for three and a half years their engagement didn’t exactly come as a surprise. But Louise admits the timing and the location meant it was unexpected. “It was New Year’s Eve and we had gone to visit Glenvale Castle, that wasn’t unusual because we like to do touristy kind of things. The castle was closed so we ended up going for a walk and I was laughing at Davin because he was wearing this ridiculous waxed coat – I didn’t realise it was to hide the ring!
“Then when he did pull the ring out of his pocket I just laughed my head off, but I said yes of course”.
And from that moment Louise went into full planning mode, “I always said I would need at least two years to plan my wedding so to do it in 18 months was challenging!”.
The couple quickly booked Coolcalm Church in Desertmartin and the beautiful Mellon Country Hotel outside Omagh for their special day which was set for August 2012. 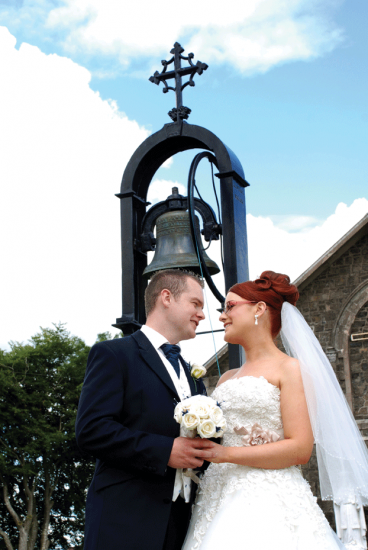 Louise’s sisters Melissa O’Neill and Janette Madden were chosen as the bridesmaids. Along with Davin’s brother Adrian McSorley who acted as bestman, and the groomsman was his best friend John Paul McConnell. The flowergirl was Alana Flannagan (Davin’s cousin) and his godson Ruanai McDermott was the pageboy. 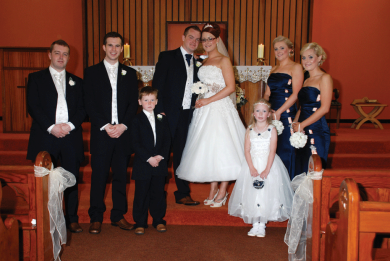 When it came to dress shopping Louise had quite a clear idea about what she wanted – and that was to keep it as big a surprise as possible!
She explained, “I went to one shop, Verona Bridal in Magherafelt, and tried on four dresses and from this I selected my dress. I had my sisters with me but I didn’t even tell them which one I had chosen. The only person who knew which one I would be wearing on the day was my mum. 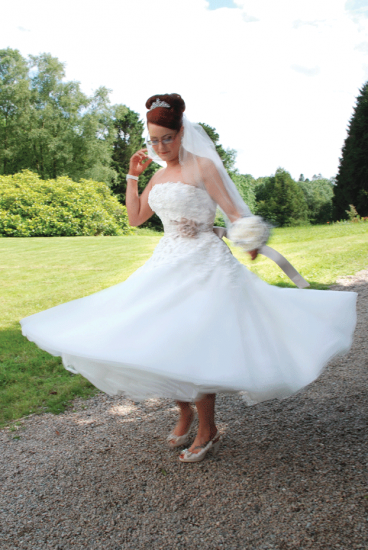 “I was delighted with my dress it was a T-length vintage style dress, and I loved it.”
Lousie’s shoes were also given a touch of sparkle by the person who made her jewellery, and her beautiful tiara was given to Louise by Davin’s sister.
Carrying a bespoke theme through to her bridesmaids dresses Louise explains they were navy fishtail dresses which she got on the internet. But she added, “They were totally unrecognisable when I had finished with them. I altered them, added coral ribbon and really made them unique.” 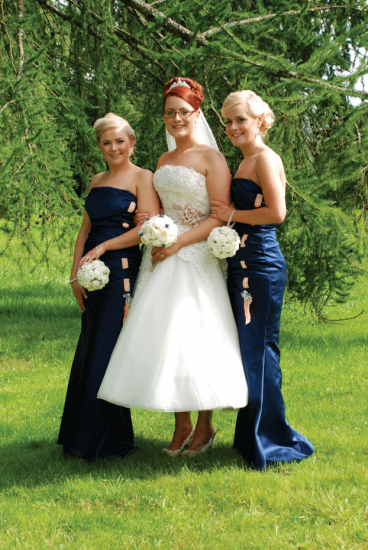 The men’s suits were navy and came from Debonair in Magherafelt. To make Davin stand out the groom’s waistcoat was cream with blue flowers on it to tone in with the bridesmaid’s dresses. 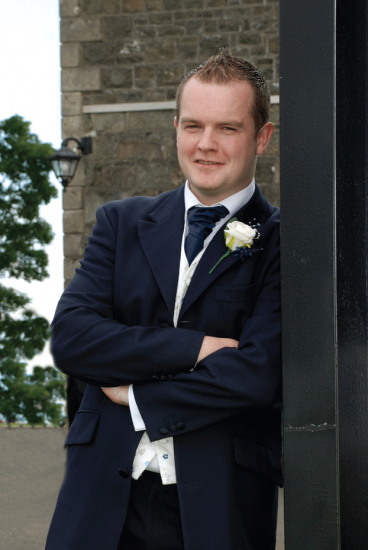 When her wedding day arrived, Louise said she was ‘calm as anything, it was as if I was just going to Mass.’ However there was no doubting where this stunning bride was destined for as she left her home in a beautiful Daimler.
Following the ceremony Louise and Davin went to Lissan House with their photographer Lauren Coulter for pictures and then on to their reception at the Mellon Country Hotel. 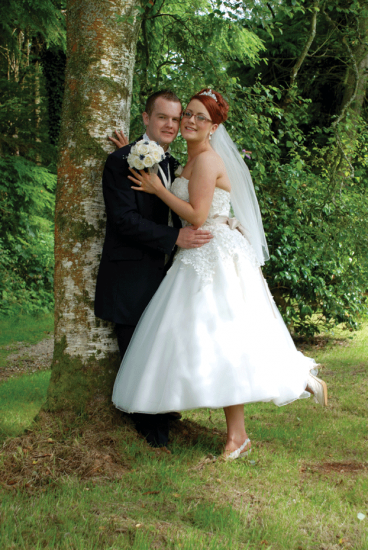 Continuing her vintage theme a stunning blue and pink cake which was made by Louise’s godmother Brigid Walls greeted them at the reception, and little touches such as personalised napkins made this a day the guests will remember for a long time. 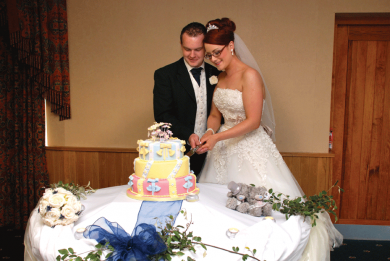 Afterwards the new Mr and Mrs McSorley travelled to Amsterdam for their honeymoon before returning to their home on the outskirts of Draperstown to begin their new life together.
And looking back on her dream day Louise adds, “It really was a perfect day, we were both so laid-back and everything went so smoothly. It was perfect”. 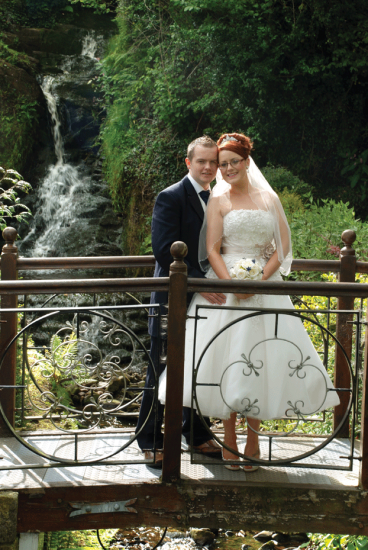