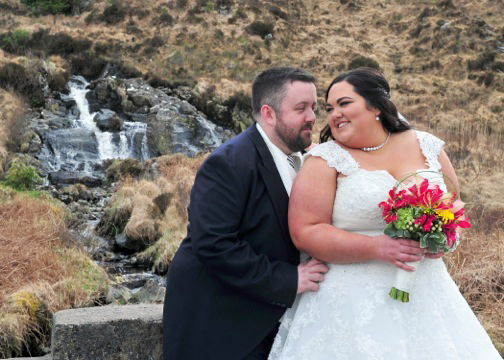 When Louise O’Hare was presented with a glittering white gold engagement ring on Valentine’s Day last year, she was overwhelmed with joy and simply couldn’t wait to become Mrs Beaumont.

The Castlederg woman married Matthew Beaumont on April 2, 2016 in the Church of the Sacred Heart, Dunlewey in a ceremony performed by Fr Jim McGonigle.

The 29-year-old, who works in Spires Vet Clinic, Omagh as a veterinary surgeon, first met Matthew in a Liverpudlian bar called Walkabout. She was a student at the time, and Matthew, who was living in London, was there as part of work training.

“There was an instant attraction, however the distance prevented us from dating initially,” Louise reflected. “We just clicked instantly, however I did have to help him improve his sense of fashion over the first few months before I could consider him a boyfriend!”

Together for just over three years, it was on Valentine’s Day last year that the Maidenhead man surprised Louise with a truly romantic proposal.

“Matthew never likes to do things the easy way,” Louise smiled. “He actually spent months secretly contacting family members and friends from around the world, asking them to make a short video which showed them holding placards and signs with ‘say yes’ on them. “He then edited hem together and after playing the video in our living room, he got down on one knee.”

She added, “We were both very happy and relieved… Matthew relieved because I had said yes, and I was relieved he finally asked!

“My ring was exactly my taste. I knew there was no way he could have picked it himself – my sister had kindly given plenty of input to his choice.”

Though the couple got stuck into wedding planning the following weekend, there was only one wedding venue that Louise had her eyes on – the An Chúirt Hotel, Gweedore, on the coast of Donegal. 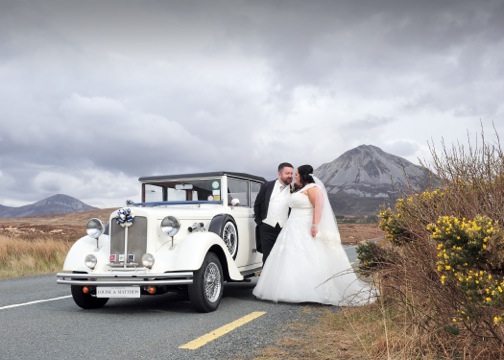 “My family have spent lots of summer holidays and weekends in Gweedore where my parents own a holiday house, and we have been going there since my early childhood,” Louise explained.

“Everytime we drove up there we passed a little church out on the bogs at the foot of Mount Errigal. “The whole area is spectacularly beautiful when the weather is good. My mum and dad had drummed it into me from a young age that that was where I should get married… So for me there was nowhere else!”

Even though Louise was ‘dreading’ her wedding dress shopping, she eventually fell in love with a strapless, princess-shaped dress with a sweetheart neckline from The Bridal Showroom in Derry. “It was the one,” she said. “It had quite a lot of lace and bling on the bodice, and we added straps to match the dress.”

When Louise’s big day finally arrived, the buzz of getting her hair and make-up done, and having her photographs taken meant that there was no time for the nerves to set in.

“When the time came to go down the aisle I was just glad it had finally arrived,” Louise recalled. “It was lovely because everywhere you looked was a familiar face smiling back. “We were also so lucky weatherwise. Dunlewey is one of those places where in good weather it is beautiful, however in bad weather it is utterly miserable.

The morning of the wedding the clouds parted and it was cloudy but stayed dry. Someone was looking out for us that day!”

After tucking in to their four tier wedding cake featuring handcrafted iced flowers made by Clougher woman Lynn Winslow, the newlyweds danced the night away to wedding band The Logues and DJ Mr Wild.

“We had such a ball – I wouldn’t change a single thing about our day,” Louise concluded. “Both Matthew, myself and our guests were buzzing about it for weeks afterwards.” 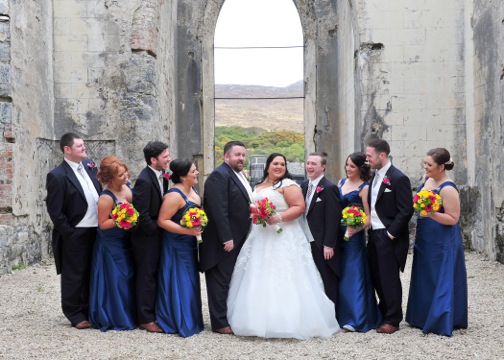