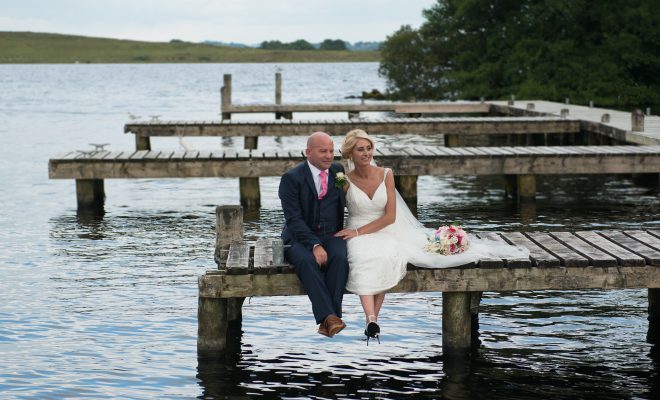 It was a mutual love of GAA football that brought Margaret Mc- Caughey and Liam Swift together – and now the pair are looking forward to watching the beautiful game in each other’s company for the rest of their lives.

The happy couple were wed in St Mary’s, Killyclogher on July 21, 2016 in a ceremony performed by Fr Brian D’Arcy – a priest the pair knew very well from Liam’s time coaching the Fermanagh Senior team.

Initially meeting each other at a Country Festival in Monaghan, Liam’s home county, it was only when they were re-acquainted in September 2014 that the pair began to see more of each other. “Liam and I could talk like we had known each other all our lives.” the Omagh woman smiled.

“We clicked immediately due to the fact that we both loved GAA football. “We went on to watch the Mens’ All-Ireland Final and the Ladies’ All- Ireland Final together, as Liam was coaching the goalkeepers of the Dublin Senior Ladies’ at the time.”

When the pair were together for a whirlwind eight months, Liam (42) suddenly got down on one knee in their living room. “He was very emotional when he was proposing, and I ended up crying as it was so simply done but so romantic,” Margaret (44) reflected. “I gave him a great big hug and said yes. It was such a special moment, and something that I will never forget.”

Choosing their engagement ring and wedding rings together on the same day, it was a white gold Tiffany square diamond cluster engagement band that caught Margaret’s eye and heart.

Then it was time for the wedding planning – and while Margaret hoped for a traditional day, she also wanted quirky GAA elements thrown in. “Our wedding invitations were GAA tickets, designed and made by Liam’s sister Donna,” she described. 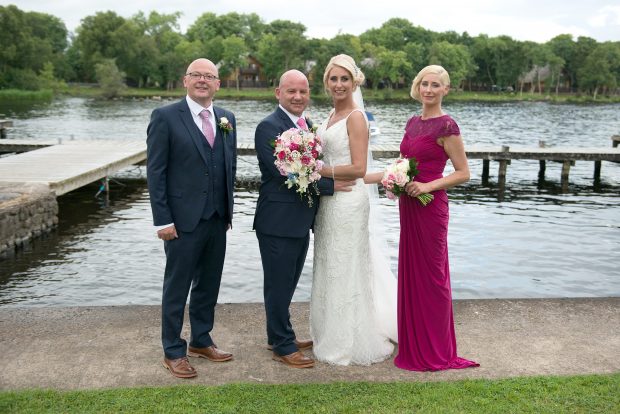 The newlyweds, Liam and Margaret Swift, alongside their maid of honour Catherine Adams and best man, Nigel Graham.

“Also I wanted my sister, Catherine to feel comfortable on the day, so I let her choose her own bridesmaid dress in a colour and style of her choice. “She picked a berry pink dress from the House of Fraser, and that’s how our colour scheme emerged.

“Then we chose varying pinks and cream lilies and roses for the bouquets, with blue forget-me-nots scattered in my bouquet. This represented two things – something blue and the loved ones Liam and I both lost.” 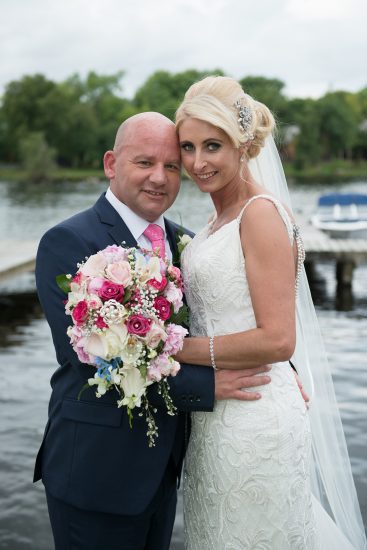 Taking her mother-in-law, Hilda and Catherine with her to McElhinney’s, Ballybofey, it didn’t take the Omagh woman long to pick out a wedding gown that was simply perfect for her.

Margaret’s dream dress featured ivory lace and crystals, with three strands of diamonds and pearls attached to the strap at the back. “I’d tried on other dresses – all beautiful – but none of them quite compared to that dress,” she said.

“It just felt so right and I knew it was the one.” For an idyllic summer wedding, there was only one venue that the couple had in mind – Lusty Beg Island on Lough Erne, Fermanagh. “The setting was perfect,” Margaret said. “Plus we chose to have a BBQ instead of a traditional wedding dinner which was wonderful.”

Feeling ‘calm and collected’ on the morning of her wedding, Margaret enjoyed one final surprise before she because Mrs Swift. “Liam had left me a DVD the night before our wedding saying ‘Play me before you go to the chapel’,” Margaret explained. “It captured our lives from early childhood to all our special moments after we met, and it also featured our favourite songs. “To say I was overwhelmed and so emotional watching it was an understatement.”

She added, “I just wanted to see Liam, and when I walked up the aisle, we both hugged each other and a few tears were dropped by both of us. “We chose ‘This I Promise You’ as our entrance song as it is a song that was so special to us. “After our vows, a reflection called ‘Bless these hands’ was read so beautifully by my brother-in-law Desy. It was an important part of the ceremony as it captured the magic of the youth of our marriage and the millstones of our married lives yet to come.”

Margaret concluded, “Niall Morgan and Mickey O’Neill also brought the Anglo Celt Cup along to our wedding during the reception, and it was fantastic to see my husband, the proud Farney man, carrying up the cup with me to bring it back to Tyrone. “We are so blessed to have so many good people in our lives and we had the perfect day from start to finish.” 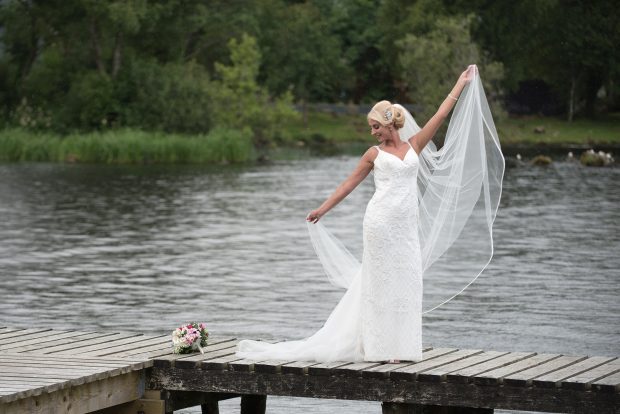 The new Mrs Swift shows off her wedding gown, which featured ivory lace, crystals and a matching veil.