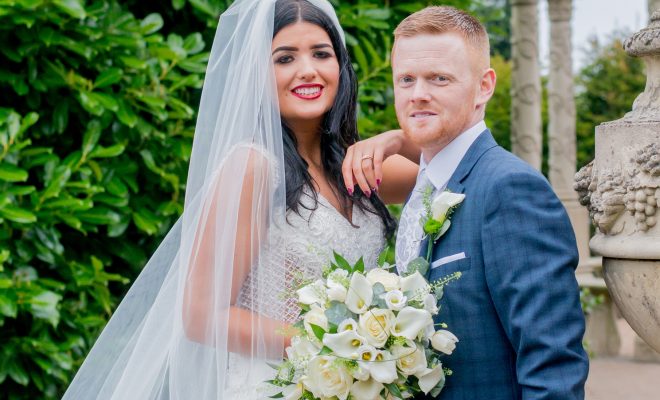 In a church also decorated with Easter lilies and white roses, the pair were wed in a ceremony performed by Monsignor Andrew Dolan at St Joseph’s Church on March 16, 2018.

The service was particularly emotional for Megan as when her father, Paul reached the top of the aisle, Monsignor Dolan asked all of the guests to give him a round of applause. Paul had been receiving treatment for cancer in the lead-up to the wedding, and he was determined to reach his goal of walking her up the aisle. 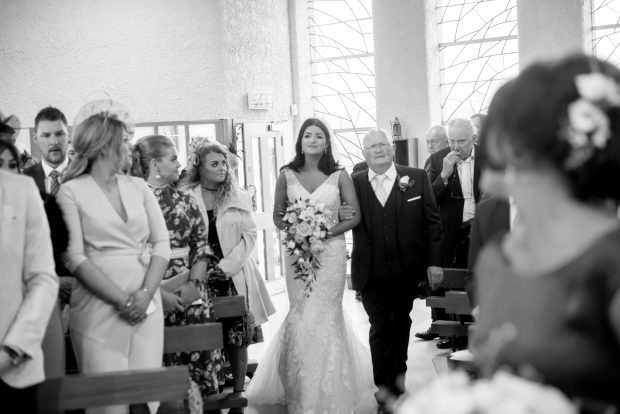 Megan’s beloved father, Paul walks her down the aisle.

The newlyweds’ wedding reception took place in Tullyglass House Hotel, Ballymena – chosen by the pair as the staff team ‘could not have done enough’, and they knew the guests would receive first class treatment and great food.

Megan, who is an area housing manager, first met Gerard, a plasterer, while attending their local GAA club. And while Megan admired his coaching and sporting skills, it was his personality that stood out to her most and they began dating in the summer of 2011.

“Gerard is laid back and gets on great with everyone,” she said. Together for more than five years, it was on October 16, 2016 that Gerard asked Megan to marry her in the gorgeous Farnham Estate in Cavan… But he was so nervous that he could barely get the words out!

“I didn’t have a clue that he was going to propose,” Megan said. “Gerard was that nervous, he didn’t get down on one knee, nor did he even ask me as he stuttered that much and just gave me the ring. 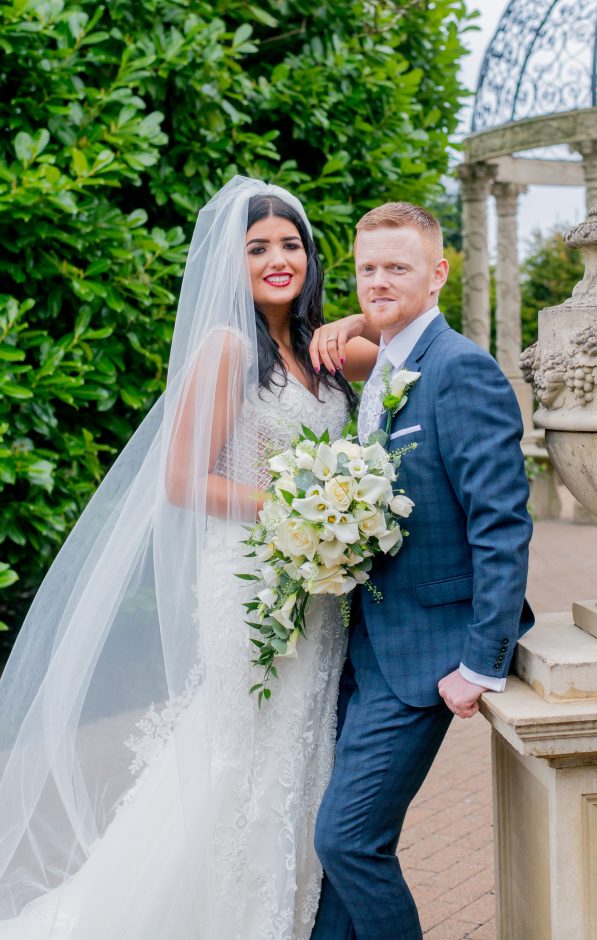 “He said it was the quietest I’ve ever been, walking back to the hotel,” she added. “But I was more in shock. Then when I rang everyone, I sort of wished I was at home to go celebrate with them all, but we just got drunk and gatecrashed a wedding at the hotel and celebrated ourselves!”

Megan’s ring featured a yellow 18 carat gold band, with a trio of diamonds in the middle – carefully chosen by Gerard. “I was surprised he had picked such a nice ring,” Megan admitted. “He said he picked gold as my mother is a big jewellery fan, and especially likes gold. Apparently he got the ring for me a few months before he proposed.

However a few of my friends, including his sister, and I decided to book a two week road trip doing the 101 route from LA to San Francisco, with a stop of in Vegas and then on to Vancouver at the beginning of October… So he decided to wait and see if I came home,” she laughed. 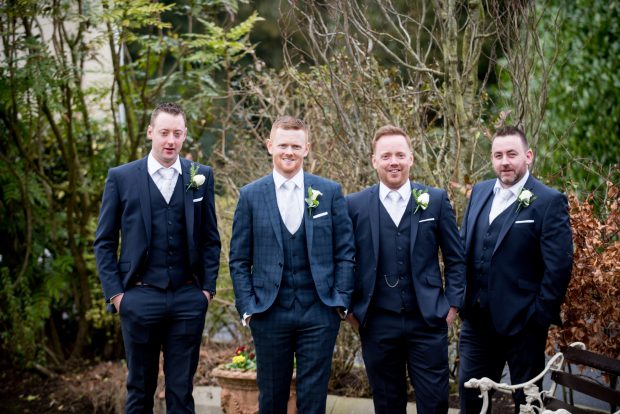 Hoping for a stress-free time while planning their wedding, the pair had their venue booked within a month of choosing a date. “From the start, I wanted Easter Lilies and white roses as they are both my parents’ favourite flowers and it fitted in well with the colours,” Megan said.

“The night before my wedding my daddy and his friend from Kevin Lynch Flowers made me a beautiful arch for the entrance to the chapel with white roses, lilies and shamrocks. It was the perfect surprise.”

Megan described feeling ‘relaxed and calm’ on the morning of her wedding day – but unfortunately not everything went entirely according to plan.

“There was panic in our house that morning as when we were leaving, we couldn’t find the two flower girls’ socks and shoes, so it was a bit manic,” Megan explained. “However a neighbour was fit to lend us one pair of shoes and socks, and Molly was carried up the aisle… It was funny in the end.” But that’s not all. 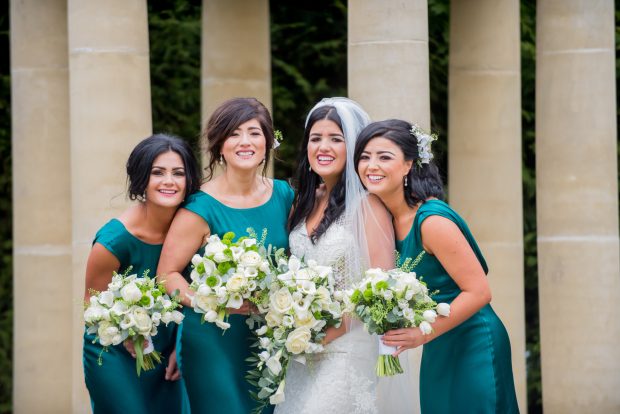 Megan and her bridal party had booked a classic Daimler vehicle to whisk them away to the chapel – however one of them broke down in her yard and she had to call for back-up. “Thankfully it landed in time before the service, and it just added to the craic,” she said.

With her friend, Laura playing the harp at the chapel, Megan said she was delighted with the beautiful wedding ceremony. “Fr Dolan gave a great service,” Megan said. “Overall, my wedding was quite Irish-themed. The songs at the chapel were mostly Irish traditional songs, which the Gribbin Girls sang beautifully. They even played Grace in Gaeilge after Communion which people are still talking about.”

She added, “At our wedding reception, we decided not to go for cake. There was plenty of food and drink for our guests, that they didn’t even notice anyway.

“The Muddlers were our live band, and then Stephen McStocker was our DJ. He knew what the crowd liked, so it didn’t take long for the party to get in full swing. “We stayed up dancing all night – everyone knew each other so it was one big party,” the 29-year-old concluded.

“We all had a wonderful time, and Gerard and I will remember our wedding day for the rest of our lives.” 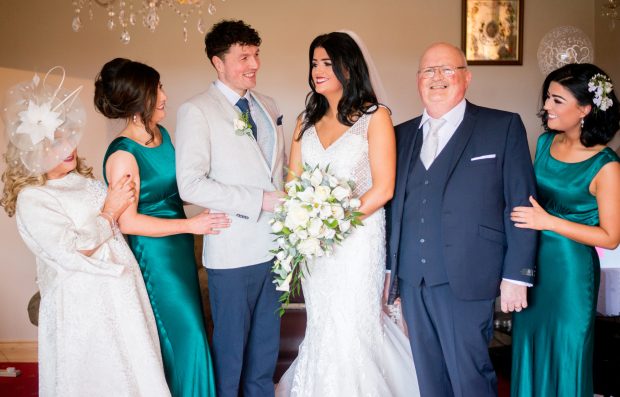 The new Mrs Megan Carey shares a laugh with her loved ones on her March wedding day.