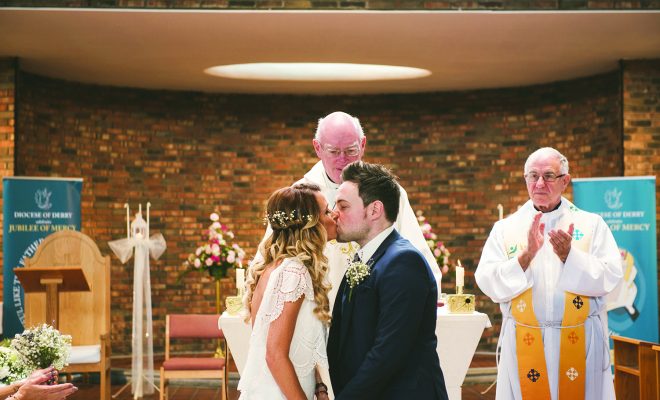 A Superhero-themed wedding in the picturesque, rustic setting of Lusty Beg Island gave Melissa Roberts and John Paul McCauley the magical day that they had dreamed of.

The couple, who both live in Glenmoran, were wed by Fr Michael Doherty at St Mary’s Chapel, Melmount on August 6.

First meeting each other in Dicey Reilly’s Bar in Strabane on a chilly winter’s evening in 2007, Melissa said they simply knew they ‘had something special’ from the very beginning.

“I really liked the fact that we could sit and talk about anything, and he always made and still makes me laugh,” the Strabane woman smiled. 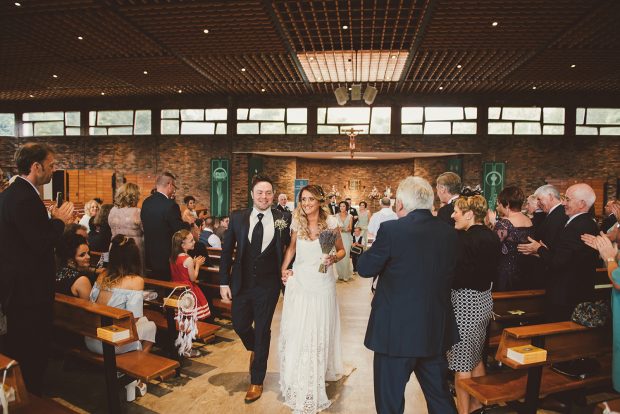 The new Mr and Mrs McCauley walk down the aisle together hand-in-hand after enjoying an intimate ceremony officiated by Fr Michael Doherty.

Together for seven years, it was on June 7, 2014 that John Paul surprised his love with a proposal in his trademark style – subtle yet heartfelt.

“He made sure one Saturday that I was out of the house,” Melissa explained. “He was preparing things to go on holidays the next day, as we were heading away to Tenerife. “When I arrived home, he had his plan of attack under way. He was already waiting on me in the living room, standing by the fireplace.”

Presenting Melissa with a pretty blue jewellery box with a platinum, diamond ring placed proudly on top, the Sion Mills native then asked his love to marry him.

“John Paul really took me by surprise,” Melissa described. “It was the last thing I was expecting after returning home with handfuls of shopping. I was overwhelmed and excited. “My ring was just perfect,” she added. “It would have been a ring I would have chosen myself.”

When the pair returned from their holiday, they began looking at different wedding ideas, but there was only one venue that Melissa had her heart set on – Lusty Beg Island.

“I had always loved the idea of our wedding at Lusty Beg as I had done a lot of different outdoor activities up around Fermanagh in my teens,” Melissa (38) reflected.

“I just had to convince John Paul it would be perfect. “We went up in August 2014 for a look around, and John Paul (34) loved the venue as much as I did. “We booked our wedding and everything else started to fall into place after that.“I knew exactly what I wanted our wedding to look like,” she added.

“I wanted to combine a bohemian feel with our mutual love for comic book super heroes. “John Paul designed our wedding invites and table planner using Marvel superheroes, and incorporated myself as a ‘Lady Iron Man’ and him as the Hulk. The groomsmen also wore superhero cufflinks on the day.”

As Melissa always adored the bohemian look, she couldn’t wait to visit wedding dress shop the White Gallery Boutique in Burren, Newry which stocked exactly the right style she was looking for.

She eventually fell for a silk, satin and cotton dress which featured a soft bohemian silhouette with scallop detailing throughout.

“That was the third dress I tried on and I just knew straight away, it was the one,” she said. “My mum and bridesmaids were also all in agreement. Dress shopping was a once in a lifetime experience.”

When their big day finally arrived, Melissa said that she didn’t feel any nerves – but admitted that her twin sister was a nervous wreck. “She must have carried both our emotions for the day,” Melissa laughed. “The only times my emotions got the better of me was when my father sat in next to me in the bridal car and first held my hand, and when we went to visit our grandparents who unfortunately could not make it to the wedding.”

She added, “When I arrived at the chapel and walked down the aisle I couldn’t help but smile, I knew I was doing the right thing.

“Father Doherty also made us feel relaxed and at ease throughout which added a celebratory atmosphere to the intimate occasion. “Looking down from the altar, we could see certain family members getting emotional. The McBeth Sisters sang the songs we had chosen beautifully and they brought a tear to a few eyes during the service. I chose ‘Just Breathe’ by Pearl Jam as my entrance song, and a friend of ours David Mc- Gaughey, sang it for us. It definitely give me goosebumps walking down the aisle.”

Melissa concluded, “Our wedding turned out to be everything we ever dreamed it would be. We were surrounded by family and friends and couldn’t have asked for a better bunch of people to share our special day with.”