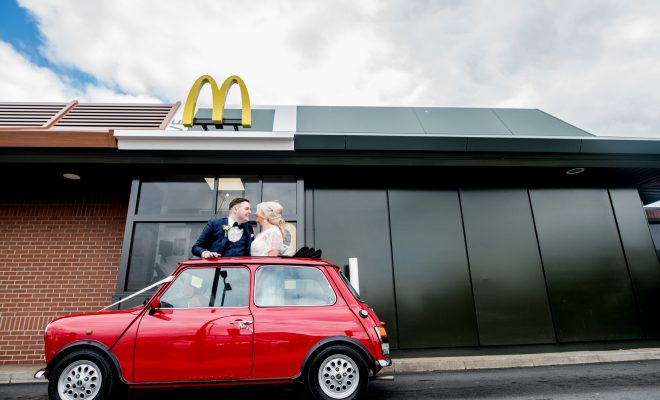 Mountain Proposal Leads To Spring Wedding For Hannah And Adam

Hannah Graham cried tears of joy on her spring wedding day when she set eyes upon Adam Stevenson who was waiting for her intently at the top of the aisle.

The pair were wed in an emotional ceremony on March 31, 2018 at Trinity Presbyterian Church, Omagh. The service, which featured beautiful music, was performed by the Reverend Robert Herron. Their wedding reception took place at Corick House Hotel, a venue settled snugly within the Clogher countryside and favoured by the newlyweds due to its modern decor inside and close-to-home location. 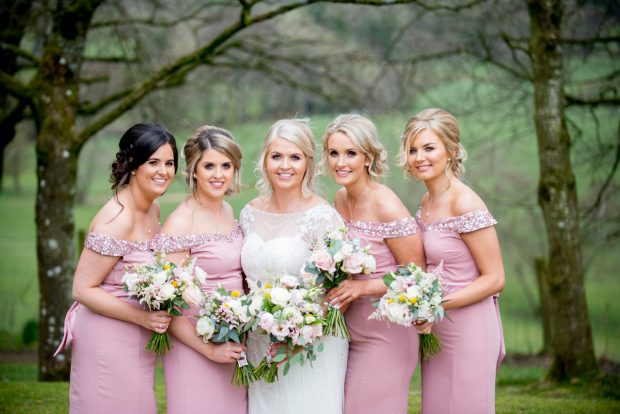 Hannah, who is a childcare assistant from Killyclogher, first met Adam on a chilly night out in Sally’s in December 2012. “We met through a mutual friend that I had known since primary school, and that Adam knew from the South West College,” she described.

The pair continued to remain friends in the months that followed, and they began dating on February 28, 2013. “I have always liked Adam’s quick wit, charm and sense of humour,” Hannah described. “He is always trying to make me laugh and never takes things too seriously.” 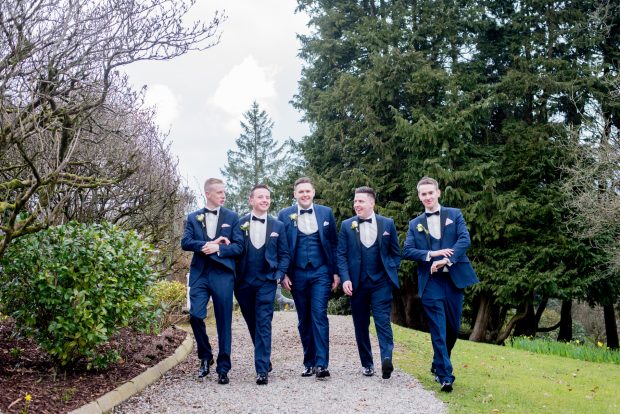 Adam Stevenson is all smiles on his wedding day, alongside best man, Daniel Sawyers and groomsmen, Aaron Carson, Adam Jeffrey and Adam Moore.

It was on Adam’s 22nd birthday that the Omagh business banker got down on one knee during a scenic trek up Bessy Bell mountain. And while the rest was much appreciated by Hannah, the special moment took her completely by surprise. “Adam proposed a few days before we were graduating, and we had plans to start a new adventure in Australia,” she said. “So Adam insisted he wanted to trek to the top of Bessy Bell as it was his birthday. I reluctantly obliged.

“I was admiring the view, having only made it to the windmills. And after moaning and complaining the whole way up, I was completely shocked to turn around and see him down on one knee amongst the brambles, with a ring in his hand.” Adam had thoughtfully chosen a simple and traditional engagement band for Hannah, which featured a single sparkling stone.

“I loved it as I don’t like anything flashy, and it was nice knowing Adam had picked it himself,” Hannah said. “I remember feeling so, so happy. Needless to say I skipped the whole way down the mountain.”

As planned, the newlyweds-to-be moved to Australia shortly after their engagement on June 24, 2016 which delayed their wedding planning. However they decided to move back to Ireland four months later as Hannah was feeling homesick and she couldn’t find work. 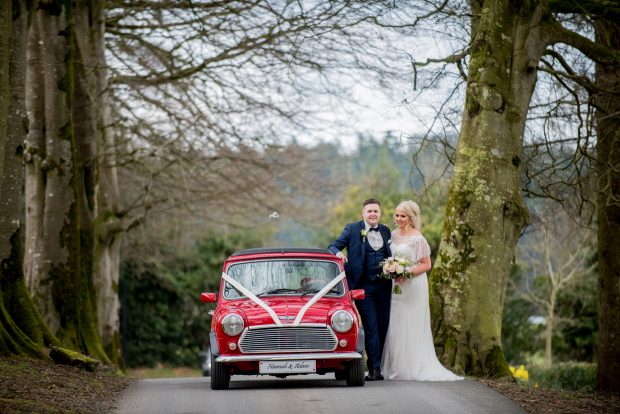 “We began looking at wedding venues after Christmas when we returned home, but I lost my dad suddenly at the end of January 2017 so the planning was put on hold for the foreseeable future,” said Hannah. “However my mum encouraged us to set a date, and that gave us a great focus and something to look forward to.

“We always wanted a certain element of tradition at our wedding, however at the same time, we always said we would do what we wanted and not worry if it wasn’t the norm. All I knew was that I wanted peony roses in my bouquet and a chocolate fountain.”

Even though Hannah had simply no clue about what type of wedding dress she wanted, she found the perfect one for her in the first and only shop she visited – Chantilly Lace in Enniskillen. “My dress was a fitted art deco style with lots of embellishment, and it went all the way to the floor with a short train,” Hannah reflected.

“I chose it because I loved the detail and I felt really comfortable in it. “Overall I loved the experience of shopping for my dress. I had nothing in mind of what I wanted and was completely open to trying every style, so it really was exciting.” 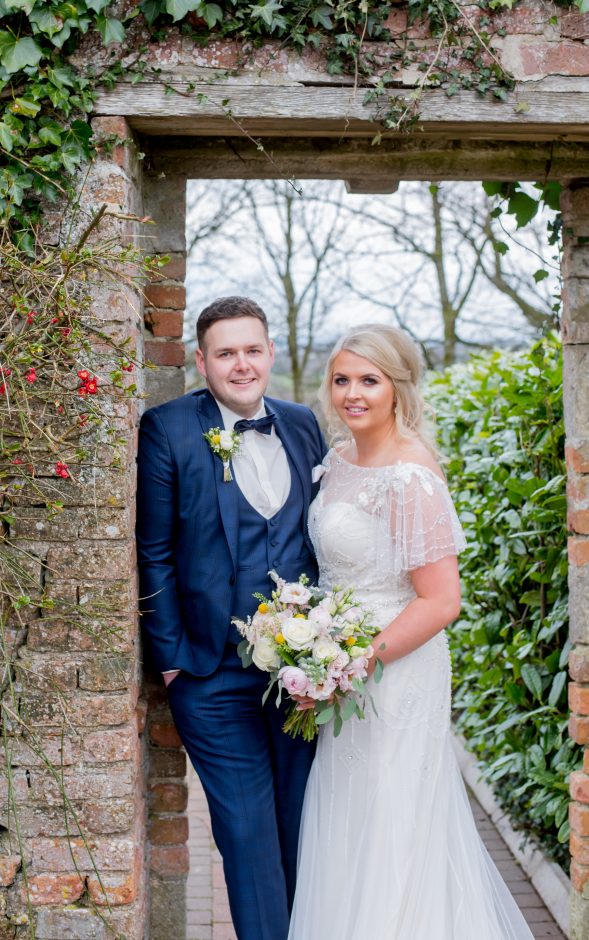 The newlyweds celebrated their beautiful wedding in Corick House Hotel in Clogher – a venue nestled neatly in the countryside.

Hannah recalls feeling ‘relaxed’ on the whole run-up to the wedding, and her calm temperament remained even on the morning of her big day. “I was excited more than anything, and I suppose I just couldn’t believe I was actually getting married,” she said.

Hannah was whisked away to the church in her uncle Gareth’s red vintage Mini, along with her uncle David who would be giving her away. “The service was a bit of a blur – it flew in,” Hannah said.

“I broke down when I was walking down the aisle and saw Adam for the first time. “I think I was just overwhelmed. I also got emotional when I was saying my vows, and I kicked myself after as I was determined I wasn’t going to cry. But I suppose it was an emotional day for a lot of people. 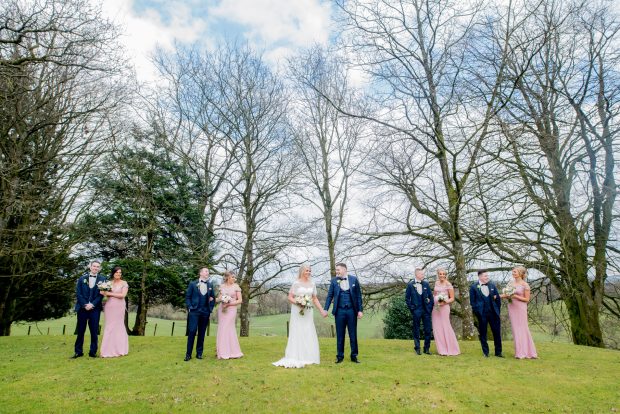 “The music at the service and reception stands out for me,” the 23- year-old added. “We booked the Mr Men to play at Corick House and I can honestly say the dancefloor didn’t empty once.”

“We had asked guests to put song requests on their invites so everyone had to get up when their song was played, and we danced the whole night. Our wedding day was perfect – it was everything we had ever wanted.”