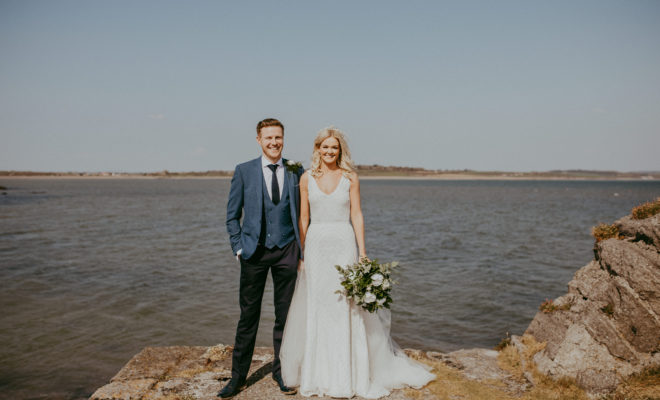 The sun shone on Sligo coast as Terri and Cathal celebrated their spring wedding day – and what’s more, they even got a few sneaky photos with Westlife who were floating about on the big day too!

Ballygawley woman Terri McWilliams (née McAleer) said her wedding day was ‘the best day of her life’, and she couldn’t stop smiling as she wed Cathal McWiliams at St Patrick’s Church, Maugherow during a ceremony performed by Father Ryan McAleer, a friend of the happy couple.

After dating for seven years, it was during a dander on Strand Hill Beach in County Sligo, in December 2017, that Cathal asked Terri for her hand in marriage. “We were going for a walk, and I was about to get a photo of us,” Terri said, “but when I turned around, he was down on one knee.It was nicest moment; full of excitement.”

Cathal, whom Terri says is ‘kind-natured, makes time for everyone and has a good personality’, picked out a gorgeous ring to propose with. “It has a gold band with diamonds and a marquise stone,” Terri said, “I loved it.”

Both Cathal and Terri celebrated their engagement over the Christmas season, and then got stuck into planning their wedding day towards the end of January 2018. “We knew we wanted a spring wedding,” Terri said, describing the planning. “Being a teacher, I had to work it around my holidays so we decided upon an Easter wedding day. “We wanted it to be quite modern, with nothing too over the top. “

We then chose Sligo as we always love being near the coast, and it was made even more special as we got engaged down there,” Terri added. “We wanted to keep our wedding modern, but also with it being a big family and friend affair, so we chose the Radisson Blu Hotel as it was a place that everyone could stay for a few days in. “It was also contemporary, and we had stayed in it a few times before so we knew the food was lovely and that the staff were very accommodating.”

Terri said she ‘loved’ her experience of wedding dress shopping – particularly as it entailed fantastic days lunching out with her mum. And despite visiting ‘quite a few shops’ during her search for the perfect gown, it was while visiting the very last boutique that she found just the one for her. “I had booked an appointment in ‘Ivory and Pearl’ in Comber as my last shop and found my dress there,” Terri said. “I think I was always holding out for this place.”

Terri’s gown was ‘beautifully detailed’ and featured a V-neck design, covered in tiny shimmering beaded sequins and was completed by a beaded belt. “I wanted something that I could feel comfortable in all day,” Terri said. “I added a tulle overskirt for the church service, with the idea of removing it later in the day.”

On the morning of her wedding day, Terri recalls feeling ‘very calm’, and cites that this was because she’d stayed in the hotel the previous night (Easter Sunday) with her family. “We had a lovely relaxing night before the wedding, and the morning of it, too, was very chilled. The weather was amazing! It was 23 degrees and the sun shone all day. The Church was on the top of a hill and you could just see the coast in the background.”

Once in the chapel, the happy couple and guests enjoyed everything about the service, and Terri said the Mass was simply ‘beautiful’. “We both loved every part of it, and it was lovely to have so many close friends and family involved,” Terri said. Then after the ceremony, Exotic Limos, Dungannon escorted the newlyweds and their full bridal party to their reception, located on the Sligo coast.

The pair’s wedding reception was held in the Radisson Blu Hotel and Spa at Rosses’ Point, Sligo – a modern place, with friendly staff, that offers majestic views of Sligo Bay and the neighbouring mountains. There, the newlyweds enjoyed music by Eamon McGarrity during their drinks reception. The Rockits and later, DJ Cathal Grimes provided the soundtrack to their evening reception and they stayed up dancing until 5.30am!

“It really was the best day of our lives,” Terri smiled. “We really embraced the runup to the wedding and everything about it. It was just so lovely to have all the people we love in one room together. “I stayed down in the hotel the night before, Easter Sunday, and it left the wedding day itself very relaxed.

“We took the Mass and everything down, and it was the best decision we ever made. I was able to spend lots of time with my family and chill out the night before. “An added bonus was that Westlife were also staying in the hotel, and so I got a sneaky few pictures with them when I was getting ready in the morning of the wedding, and later that evening at the reception! “A fantastic day was had by all.”