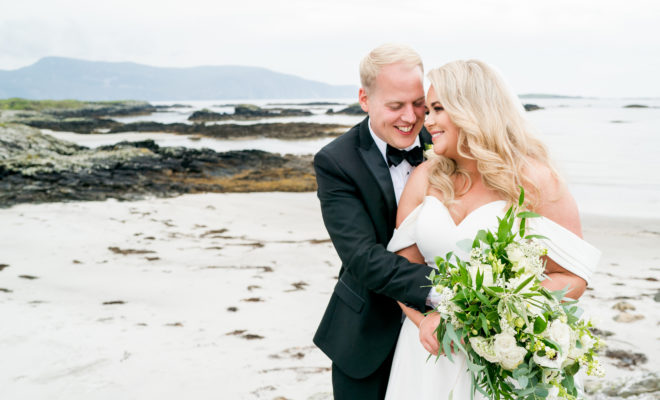 When Aoife Taylor (née) Kilbane met her future husband on a night out in Heebie Jeebies in Liverpool there were jitters – but only in a good way. The Ardara woman met Allan in April 2010 and says she was instantly attracted to his sense of humour.

Aoife, who now lives in Liverpool with her snooker player/MC husband, told North-West Brides of the moment they first met. “I was attracted to his charming good looks – that’s what he would say! He tells people I introduced myself as AOIFE – all the vowels apart from U. Clearly did not happen, but I’d say it was his sense of humour that confirmed the attraction.”

The couple were together for six years when Allan threw Aoife completely off guard with a romantic proposal of marriage in September 2016.

“We used to live in Essex so we would regularly get the Eurostar to France and drive to Bruges for a weekend. This weekend in particular he told me he had a snooker exhibition, something we went to before in Bruges so I didn’t think of anything out of the ordinary.

“On the Saturday morning we went to walk into town for some breakfast, it was sunny and warm but Allan insisted on taking his coat, I told him he wouldn’t need it but of course the ring was in the pocket. He said, ‘let’s walk a different way’, which was a shortcut. The shortcut brought us to a lake called ‘Love Lake’. Still, I didn’t think of anything out of the ordinary as we had been there before. It is covered in swans, canal boats and horse and traps. I went to walk closer to the edge to get a snap of the swans when he pulled me back and that was it, next thing I knew he was on one knee and the ring was out.”

Aoife said she was so stunned but also delighted to accept Allan’s proposal – but only if he got up off the ground where he had been on bended knee to present her with a white gold, princess cut ring with a band of diamonds on both sides.

“He designed the ring himself and had pictures of the production process before he picked it up in London.” The couple chose not to start planning their big day straight away, opting instead to savour the special moment.

“I really wanted to enjoy being engaged and enjoy the celebrations. I didn’t really start planning until a year before the wedding.” The couple set their hearts on a traditional and elegant day. “I knew I wanted a classy black and white bridal party. Simple white and green flowers with plenty of foliage. I didn’t want fussy. Simple clean lines and elegant. “It’s very easy to go overboard with planning so I tried not to overthink things and once I had decided on something, I stopped searching for others.”

Having decided on her theme, Aoife then turned her attention to shopping for that once in a lifetime gown. Aoife’s mum, sister and bridesmaids accompanied her on her search for that perfect dress. She had allocated one weekend to dress shopping, certain that she would find her perfect dress on the first day. She was right.

“I made an appointment at Pearls and Lace in Donegal Town. Straight away I was greeted by Nollaig who was fantastic. Within minutes of talking to Nollaig I was back to being excited and raring to go. The shop was very well laid out with each of the dresses in pristine condition. They were a joy to try on. The first dress I chose was one I had saved in my camera roll and straight away I knew it was the one. I did try on many others but knew the first one was the one. Once the veil went on that was it.”

Aoife chose a dress made of Mikado fabric, with a sweetheart neckline and an A-line skirt, which had detachable straps that fell on the arms and a belt on the waist. The dress was finished off with buttons the whole way down the back and had a beautiful train.

The couple were married in August 2019 in the Church of the Holy Family in Ardara by Fr Robert Carey. “I was very calm on the day, I wanted the house to be relaxed and for all the bridesmaid to enjoy the build up. The lead up to the wedding was a little intense and luckily for Allan he stayed in Liverpool until the week of the wedding.”

The morning of the couple’s wedding day was bright and dry as they made their way to the church, for what turned out to be an emotional day. “We had a traditional Irish wedding with fabulous music from Aileen Sweeney and Karen Heena. Allan needed a bucket for the amount of tears he shed. Fr Carey was a friend of Allan’s from Liverpool who came over and celebrated our marriage. It was lovely to have someone who knew us and made the connection with Liverpool.”

“Mary, the manager, was great at dealing with all the requests. We planned the wedding from Liverpool and popped in when we were home. We had a list of questions with us and Mary could answer each of them on the day.”

Having planned the wedding from afar, Aoife, a home economics teacher, said that she enjoyed making the four-tier white iced cake herself. The talented teacher designed it with edible white lace which decorated two of the tiers. The plain tiers were decorated by Shirley Doherty in Love Blooms. She made my bouquets and decorated the cake with fresh flowers.

Following speeches and dinner, the couple danced the night away to music by The Rockits band followed by a DJ. “The Rockits were fab. The dance floor never emptied all night. With the mix of Irish and English guests we thought they might find it difficult to strike a balance, but they were brilliant. The DJ was also part of The Rockits for the late night guests. We stayed up until 4.30am the following morning. The last few stragglers were in the guest bar.”

Some months on from their special day, Aoife said the couple are still enjoying looking back at their photographs and videos. “It was fantastic. We were so grateful for all our family and friends who travelled for the weekend. Everything went as we wanted.”

The couple enjoyed a mini-moon to The Johnstown Estate in County Meath following their wedding day for some well-deserved chill out time. This summer will be an exciting one as they plan to travel to Dubai and the Maldives for their honeymoon.