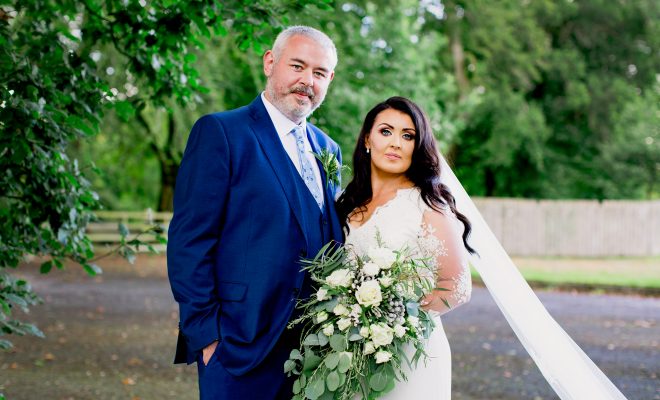 A luxurious wedding of glitz and glamour, inspired by some of the most revered fashion-savvy celebs, gave Niamh Wilson the day of her dreams. Not only did Niamh incorporate elegant white flowers into her decor – a nod to both Christine Lampard and Kim Kardashian who did the same on their wedding day – but the Stewartstown native also donned a long cathedral veil after falling in love with Meghan Markle’s grandiose bridal style.

Niamh’s wedding cake of lemon and elderflower too, was inspired by the Royal couple, Harry and Meghan who enjoyed the same spring flavours on their wedding day. With their cute little daughter, Maeve by their side, Niamh Forbes and Mike Wilson wed at St Mary’s, Stewartstown on August 24, 2018 in a ceremony performed by Father Michael Seery.

Their wedding reception took place at the intimate Tullylagan Country House Hotel, Cookstown, chosen by the pair because of its local location, romantic feel – and it even had its own dog! Niamh, a solicitor, first met Mike from Liverpool on St Patrick’s Day 2010 at the Pig & Whistle pub in Liverpool. 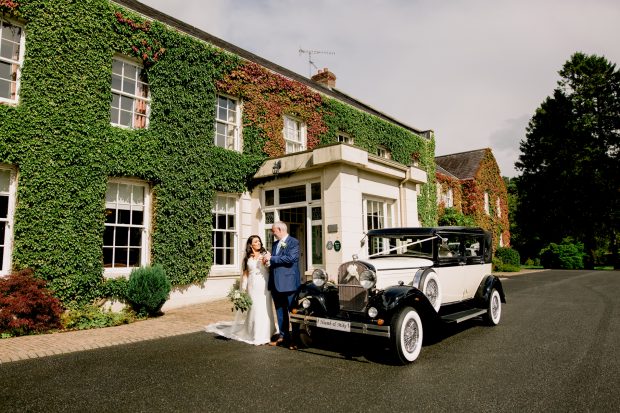 The new Mr and Mrs Wilson say cheers to a happy future together.

At the time, Niamh was a trainee solicitor on a night out with the girls, but she couldn’t help but notice Mike’s ‘je ne sais quoi’. However, the pair lost contact and did not reconnect until January 2011, and then they began dating. Together for around five years, it was in August 2016 that Mike, also a solicitor, asked Niamh for her hand in marriage.

“I was truly over the moon,” Niamh, who is now living in Liverpool, said. “Mike realised that I had high expectations after a lot of dropped hints.” Mike always knew that Niamh wished to choose her own engagement ring, and after much deliberation, Niamh picked out a gorgeous platinum double halo engagement band from Tiffany & Co in London. “I still marvel at it daily,” she said. “After all, aren’t diamonds a girl’s best friend? Not to mention, Mike.”

Excited to move onto the next stage of their relationship, the pair began planning for their wedding straight away – and luckily Niamh knew exactly who to turn to for inspiration. “I absolutely love Kim’s Kardashian and Christine Lampard,” she said. “So I wanted all-white flowers on my wedding day, just like what they had, to create a modern, luxe feel. 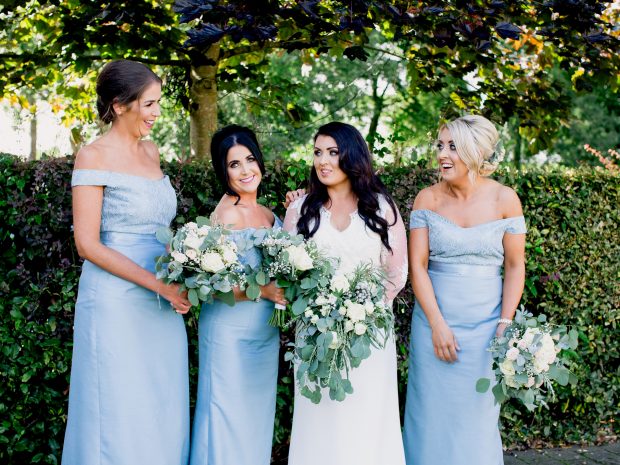 “However the venue was the hardest decision myself and Mike had to make,” Niamh explained. “I had a few other places in mind, and initially had considered Belfast, Lough Erne and Slieve Donard as we had a lot of people coming from England. “But after we had our little girl, we decided we wanted something more close and intimate, yet traditional, and so we fell in love with the Tullylagan Hotel in Cookstown.

“Despite living locally, I had never been there for a wedding before but we instantly loved the country family feel to it, and they even had their own dog. It was also nicely secluded, and it had a real romantic feel.”

Instead of visiting different bridal boutiques in search of the perfect wedding gown, Niamh decided to contact bespoke designer, Emma Beaumont from Knutsord, Cheshire to craft a dress exactly to her tastes. The result was a fitted gown of delicate lace, long sleeves and a long train, complemented by an elegant Cathedral-length veil. “I am so glad that Meghan Markle went first, so that I could fall in love with my long veil, which I did,” Niamh smiled.

When Niamh’s wedding day finally arrived, she recalled feeling ‘surprisingly calm’ – and was adamant that not even the damp Irish weather would rain on her parade. “On the morning of my wedding, I think I had got all of the nerves out of my system as I had a few hiccups that week,” Niamh said. “The weather was inclement though, so it did rain as I left the house but had lots of umbrellas on hand.” 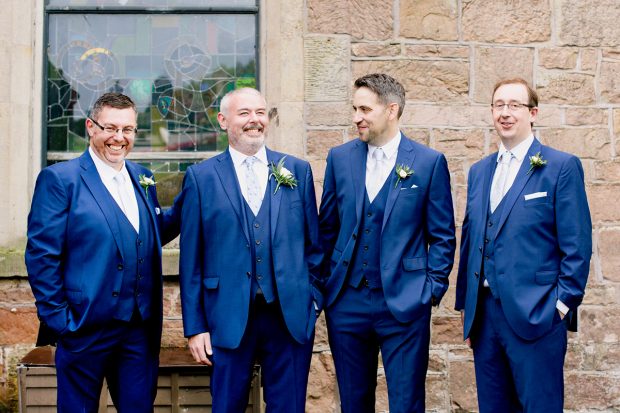 Niamh described her wedding service, which was filled with amazing music, as ‘emotional’, ‘joyful’ and ‘moving’. “I walked in to music on the bagpipes, and then the wonderful Arietta Quarter truly blew us away,” Niamh reflected. “One of my best friends read the Communion Reflection which Mike chose from his favourite author, Neil Gaiman and she read it with such warmth.

“I wanted some classic instrumental with an Irish feel, and as we left they played an uplifting jig. “We enjoyed quite an eclectic mix of music, and even fitted in some modern tunes like Leonard Cohen’s ‘Hallelujah’, John Denver’s ‘Annie’s Song’ and John Legend’s ‘All Of Me’.” The music certainly didn’t end at the wedding ceremony, as a songfilled reception was just around the corner – complete with traditional Irish tunes, and hits loved by the locals and English like.

“We wanted quite an Irish feel to the wedding, and the McStocker Ceili Band certainly delivered,” Niamh said. “We had quite a lot of people from England, so they got a real authentic taste and it was really interactive – everyone was up doing the waves of Tory! “Our pre-dinner entertainment saw Roisin McKernan play a lovely guitar acoustic set, and she even threw in some Beatles songs for our Liverpool guests.

Later on in the night, we had a DJ for the party tunes, with some old school music for us old-time ravers. “Everyone told us they had a great time, which was so important to us,” the 34-year-old concluded. “Our wedding day was truly marvellous from start to finish”. 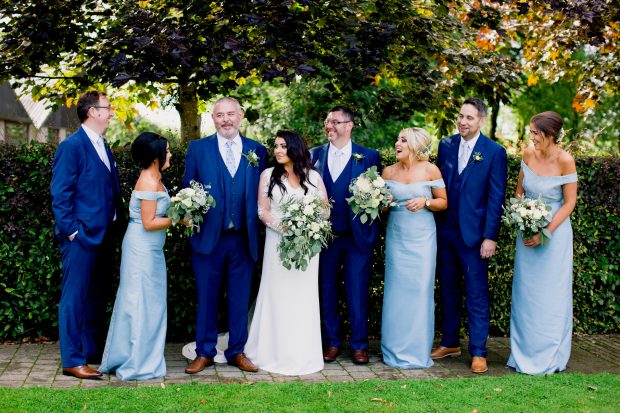 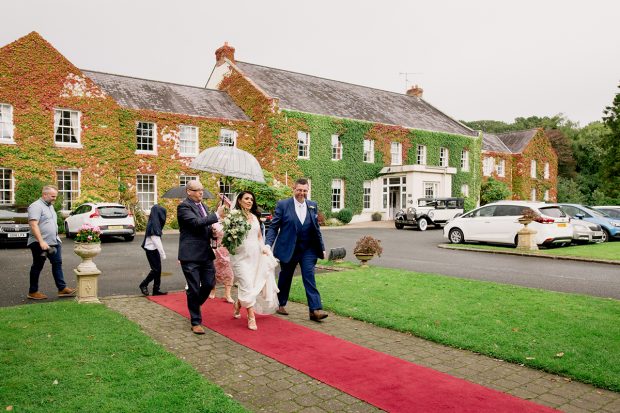 Bride Niamh Wilson was determined not to let the rainy Irish weather dampen her spirits, and she had her dainty umbrella at the ready.