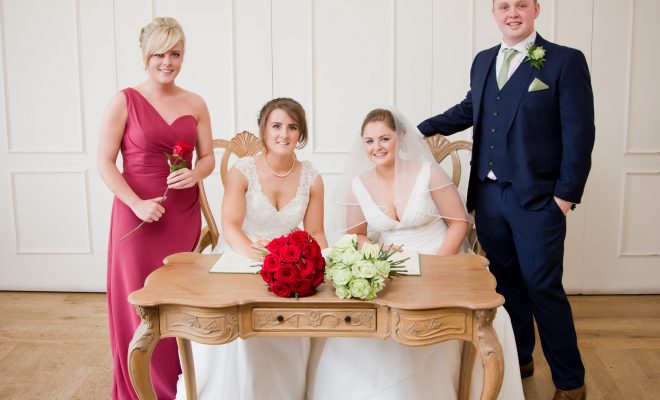 It’s a nice day for a WHITE WEDDING

It was a moment which Constance Whyte had been waiting so long for – her marriage to a lady whom she had fallen in love with. And as the Omagh woman walked down the decorated aisle to a sea of smiling faces and support, she couldn’t help but cry tears of happiness.

On May 1, 2016 in the West Tower Country House Hotel in Aughton, England, Constance married Jennifer White – and making it a truly ‘white wedding’, Constance adopted her wife’s surname.

The pair first set eyes on each other in the bustling city of Manchester, a place where they were both studying at the time. They also began to realise they had much in common – especially their love of playing soccer.

“What I initially found attractive about Jennifer was her straight to the point attitude and her big brown eyes,” she described. “The more time we spent together the harder it was to separate us.”

It was the date of their five year anniversary, February 22, 2015, when Constance decided it was the right time to propose. Surrounded by the breath-taking views of the pretty Antrim coast, Constance got down on one knee in the middle of the famous Carrick-a-Rede Rope Bridge and asked Jennifer for her hand in marriage.

“I explained to the staff there what I wanted to do, and they kindly made sure the bridge was clear for us to cross,” Constance said. “Even though I knew she would say ‘yes’, I was overwhelmed with happiness and the sheer delight in Jennifer’s face filled me with joy.” 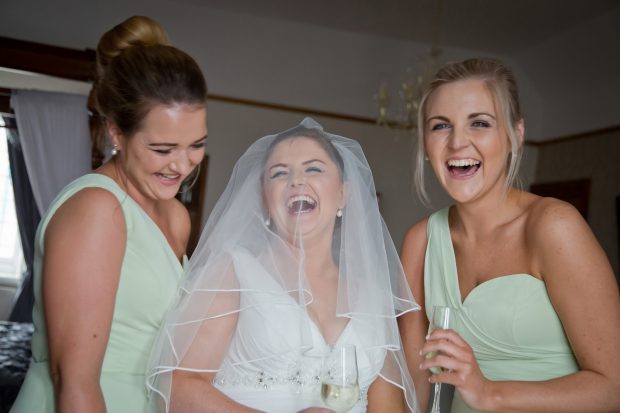 Constance White (née Whyte) couldn’t hold back her happiness on her wedding day. She is pictured with her bridesmaids, Louise O’Neill and Lily Magenis.

Constance then presented Jennifer with a white-gold Tiffany-style ring which featured a sparkling solitaire diamond. “This was what I was most nervous about as I wanted to get her a ring she would love,” Constance recalled. “With the help of my mum Roberta, we managed to find the perfect ring for her.”

Straight after the proposal, Constance whisked Jennifer away for a beautiful mini-break in Iceland. “I thought it would be nice way to relax and spend some quality time together, as I knew when we got back it would be wedding planning time,” she said.

Planning ‘soon fell into place’ for Constance and Jennifer, who hoped to keep their wedding ‘as traditional as possible for a lesbian wedding’. “Jennifer’s favourite colour is red and mine is green, so we decided to create a travel theme-day focusing on the red English Rose and the green Irish Shamrock,” Constance explained.

“However as there were two brides, some things had to be modernised – such as the walking down the aisle part and the speeches.”

Constance admits that she has always despised shopping so she was initially apprehensive about the difficult task of finding her perfect wedding dress. But it was Constance’s mother, Roberta to the rescue once more. Flying over to Manchester, she visited two different stores with Constance – and the blushing bride-to-be fell in love with the fifth dress she tried on.

“Five has always been my lucky number, “Constance said. “My dress was a V-neck, white dress with a small trail. I also wore a veil.”

“We each have a white gold ring which have a small shape removed on each,” she explained. “So when they are placed together, they create a heart.”

On the morning of her big day, Constance described feeling ‘surprisingly calm’. “I had been given advice from so many people to just enjoy every moment so I did,” she reflected.

“It rained for a good portion of the day, but we did not let that ruin our spirits as they say it is good luck if it rains on your wedding day!” And while the thought of walking down the aisle was initially terrifying for Constance – she did have 128 guests at the service – she was soon overwhelmed with happiness. 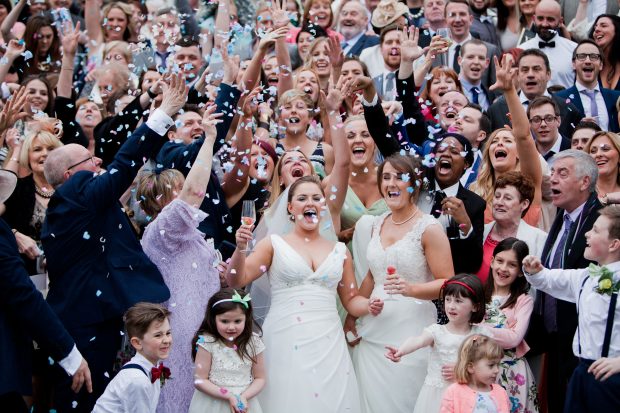 The newly-married Constance White with her wife, Jennifer were overwhelmed by how much support they received on their wedding day.

“The service was perfect,” she said. “Once I walked in and was greeted by everyone’s smiles and happy tears I was totally overwhelmed that the day that we had been waiting for had finally arrived.

“Just standing in front of everyone showing them how much we care about each other was a truly incredible experience.”

She added, “We chose to host our service and reception in the West Tower Country House because of its stunningly beautiful interior and scenery. It was also one of the few venues that had capacity for our numbers – in the evening, we had 180 guests.”

Constance concluded, “I could not have asked for a better day. It made me thankful that I had found the woman of my dreams. “I’m thankful for the love and support we have in our lives. And I’m thankful that we live in a time where it is possible for our love to be recognised.” 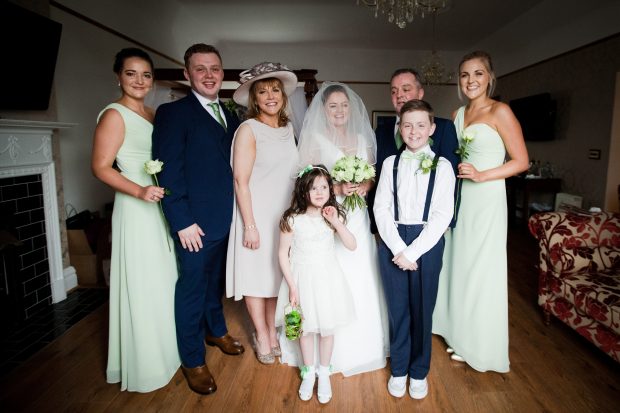