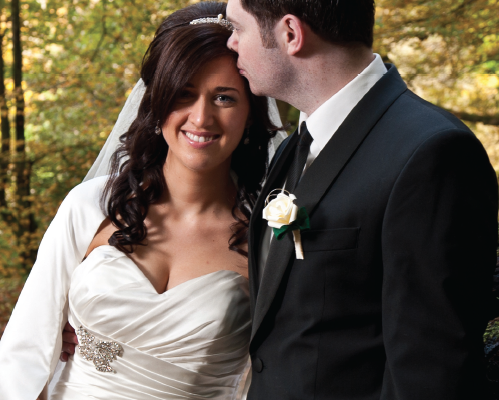 AN AMERICAN NICKEL AND A GOLD COIN…

The couple met as chemistry students in University College Dublin. And Noreen received a romantic gesture when they exchanged wedding gifts. Her gift was an American nickel Cathal had secretly saved from a New York trip they went on to celebrate their first anniversary.

The nickel was minted in 2005, the year they first met. The groom received a gold coin that Noreen’s parents, Dan and Margaret had in turn given her as an engagement present.

The bride came across her stunning dress while holidaying in County Clare, where Cathal’s parents Mary and Cathal senior had moved to from Firhouse, Dublin. The Victoria Jane ‘Trevi’ dress was chosen in Amore Mio Boutique, Church Street, Killaloe.

The bride who was attended by Teresa McCallion, a childhood and university friend, Shóna Murphy, Cathal’s ‘baby sister’, and Rosie O’Donnell, sister of the bride. The Halter dresses were designed by Kelsey Rose from McElhinney’s Bridal Rooms, Ballybofey.

The groom’s suit and those of his bestman and brother, Connor as well as his groomsmen, future-brother-law, Ian O’Halloran and college friend, John Chambers were from Marks and Spencers Men’s Formal Occasion Range.

Instead of throwing rice as the newly weds left the church the couple left bunches of handcrafted colourful streamers and paper windmills in a basket in the foyer so the one hundred guests could cheer and wave as Cathal and Noreen left St Columba’s as husband and wife.

Cathal said his ‘ridiculously talented wife’ not only made the streamers and flags but she also created the bouquets, boutonnière, gift boxes, beaded jewellery and keepsake flowers. Noreen made individual paper flowers with lovely fortune messages attached to them. So, instead of throwing away the one bouquet to the assembled guests, family and friends received a flower with a personal message as a memento.

The creative couple came up with the idea of a “photobooth” for the reception which the groom and groomsmen set up at the Silver Tassie on the morning of the wedding. It proved to be huge success.

O’Hehir’s Bakery, Letterkenny provided the centrepiece cake while the multi talented Noreen made the sculpted cake toppers depicting her and Cathal standing beneath an old Irish sign post pointing to Donegal in one direction and Dublin in the other. Inspired by artistry of the bespoke cake toppers Noreen has set up her own business with Magic-Moment-Cake-Toppers.

The couple, who had no holiday for four years due to Cathal’s studies for a Doctorate in Chemistry, splashed out on a spectacular honeymoon; four nights in Fort Lauderdale, Florida, seven days cruising the Caribbean, five nights in San Francisco and five nights in Vancouver and Mr and Mrs Murphy ‘loved every minute of it.’