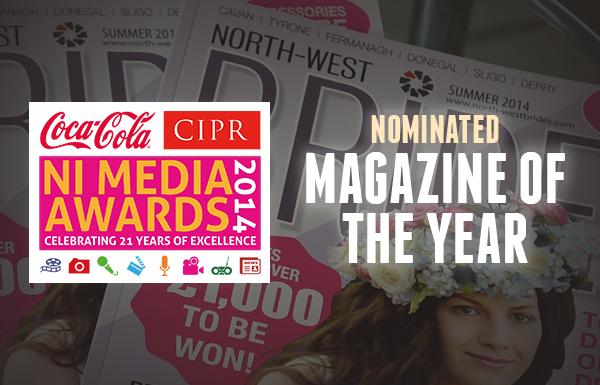 North-West Brides shortlisted for Magazine of the Year

We are pleased to announce that…

Described as ‘vibrant’ and packed with ‘up-to-date trends and news,’ the north-west’s latest and most fashionable bridal magazine, North-West Brides, has been shortlisted for a national magazine award.

North-West Brides is published by North-West News Group. In it’s third year and 5th edition, the magazine has gone from strength to strength building on it’s north west content whilst being produced to national standards.

The magazine has been shortlisted for a Northern Ireland CIPR media award. One of six to reach the much coveted shortlist, it’s the only bridal magazine to feature making it even more special.

Aisling McCann, North-West Brides co-ordinator, was delighted with the announcement.

“We’re absolutely chuffed to bits with the shortlist and it gives us a great sense of achievement given the huge amount of work involved in the production of the magazine. It’s a real team effort, from advertising, editorial, marketing, photography, printing and production/design.”

Revered journalist Bob Satchwell, executive director of the Society of Editors and head of the judging panel, was overwhelmed by the quality of entries received.

“The awards celebrate media excellence throughout Northern Ireland and the standard of entries this year was exceptional and stirred much debate among the members of the judging panel. The judges had an arduous task of selecting the winners from the depth of talent whose consistency and brilliance sets the standards for others.”

The prestigious awards event takes place on Friday June 27 in The MAC Belfast and is hosted by Sky News anchor and This Morning presenter Eamonn Holmes.

Keep updated with north-westbrides.com and our Facebook and Twitter channels to find out how we get on at the awards.