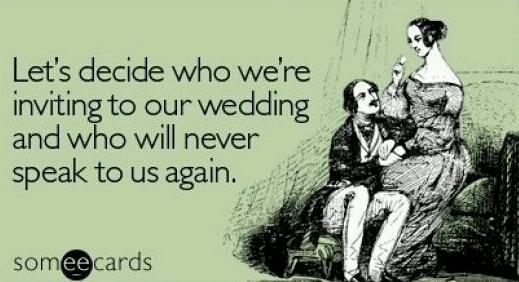 One Hundred and One Invitations

Before I became engaged, when I was only a care free guest, when the only wedding-related effort required of me was to get five million hair clips out of my skull the morning after, I couldn’t have imagined how much work is involved in compiling a guest list. Just as we always knew we’d be getting hitched abroad, we also decided years ago that if we ever did take the long walk up the aisle, it would be in front of a few close friends and immediate family rather than the entire population of Strabane.

Our reasoning for this is quite simple – we both hate people. I joke, we like people as much as we have to by law. What we don’t like are large crowds of people or more importantly, large crowds of people each with a set of working ears that will, on the day, be working well enough to hear us say our vows. That would be, quite frankly, cringetastic.

You’re probably wondering why then, we didn’t run off to Vegas and get married Britney style, with no guests and no memories. To be honest, we did consider it. However, certain people, who shall remain nameless (my sister and his sister) warned us that if we ever pulled such a stunt we’d be unceremoniously disowned. While Mr. Brady had qualms about such an outcome, I argued we should at least consider it. Laugh out loud sis, that means what I said is okay.

One of the most alarming things I’ve ever heard my married friends say is that there were times, during their reception when they would look out into the crowd just in time to see a complete stranger digging into a vol au vent. They would frown slightly, turn to their new husband and ask, “Is he one of yours?” only to be met with the rather daunting reply of “no, I thought he was one of yours”. How they resisted the urge to start screaming “stranger danger”, I’ll never know. This, to me is as odd as coming down for breakfast in the morning to find someone sitting at my kitchen table eating the end of the cornflakes! As far as I’m concerned, a wedding is, like my cereal cupboard strictly off limit for people with whom I’ve never shaken hands.

Anyway, we started drawing up our guest list in the usual way. “Him, her, her, him, definitely not him, are you mad? After what he did to that goat?!” You know, the usual conversations. The only thing is we were “him-ing and her-ing” for the good part of a Friday night and by the end of Graham Norton, our small guest list had turned into something resembling a roll call for the United Nations Security Council. Now, someone told us once that whatever your final guest tally, at least twenty per cent of them won’t go. Given that our wedding is in a different time zone, we estimated that percentage to be slightly higher than twenty and before we knew it, we’d missed Gogglebox in a sea of sums and calculators. Maths never was my strong suit.

The next day, free of my wine-induced haze, after spending a while wondering how Ryan Gosling’s name got on there, I re-worked my list. I employed the following rule: if they didn’t congratulate us on our engagement then they don’t get to come to the party. Ruthless but effective! I trimmed and sheared that list with a level of hungover determination I’d not demonstrated since I challenged myself to eat a full tin of Heroes last Christmas. By the time I was finished, if you lifted our wedding and shook it, you would have heard only a little rattle, unlike the tub of sweets which was most definitely very silent.

So, while we’re not quite Britney and your man rockin’ ripped jeans and stinking of jaeger bombs, we are at least sticking to the small intimate destination wedding we always wanted. Not that there’s anything in the world wrong with big weddings, the bigger the crowd the bigger the party and all that but that whole hooha is just not for us. I can’t wait to spend more than two minutes with everyone there. I’m so excited that we’ll all be on holiday together, some of us for the first time ever. I’m thrilled and ecstatic to know that a small to medium group of Irish people will descend upon a small Spanish town next September and more than anything, there’s enough room in the budget to throw each one of them a fiver if they promise not to laugh during our vows!