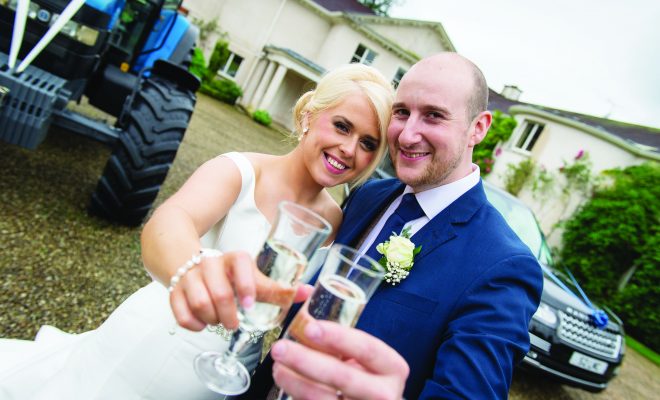 Marrying her best friend in her beloved hometown of Fivemiletown simply gave Orla Sheenan the best day of her life.

Orla explained that because the pair were from the same town, they often chatted when they saw each other – long before they began dating.

It was on a night out in Omagh in 2009 that they officially hooked up, and they have never looked back since. “I remember that Gary took my phone number but never contacted me for a while,” the 26-year-old explained. “But once he did, we headed off on our first date, and the rest is history.”

After the pair had been together for six years, the topic of marriage came up during a romantic holiday to Greece in 2014. “So in December 2014, we visited Ernest Jones in Belfast to pick our rings together,” Orla explained. “I recall that it was a Sunday, and both of us were so excited. “The ring we chose for me was an 18ct white gold, circular diamond ring.”

The couple’s first port of call when planning for their big day was securing their wedding band, Juice from Cookstown. “We had previously heard them play at a friend’s wedding and knew we wanted them at ours,” Orla described.“We then booked our wedding date around them.

“We also knew that we wanted to keep our wedding modern and elegant, with a bit of ‘Agri spec’ thrown in. So we decided that our table plan would be the name of fields and we booked a tractor to transport us to our wedding reception. 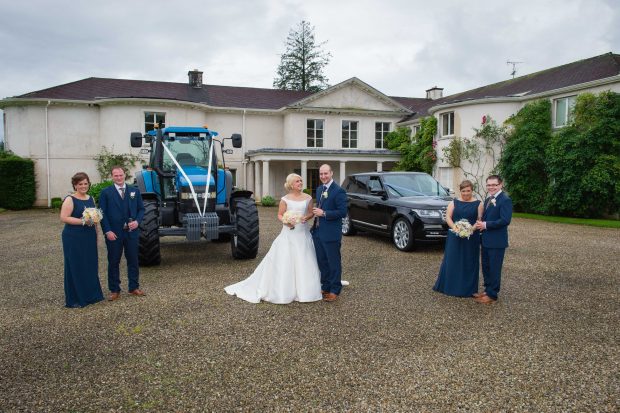 “We wanted to stay away from the typical vintage and rustic theme.” Visiting Serendipity in Fivemiletown to try on wedding gowns – the first and only bridal store that Orla went to – she soon found the perfect dress for her.

The new Mrs Warrington shows off her
elegant Pronovias fitted dress which she purchased from a bridal store in Fivemiletown.

“My wedding dress was an ivory Pronovias fitted A-line dress,” Orla explained. “It was a simple but elegant dress, with a belt detail to the front and button detail all the way down the back to the bottom of the train. “I would definitely recommend Serendipity to future brides.”

When booking her wedding reception, there was really only one venue that Orla had her heart set on – The Valley Hotel in Fivemiletown. “That venue has been used for many a family event throughout the years,” Orla reflected. “I wouldn’t have dreamt of anywhere else, and being local made it so personal and special.”

On the morning of her wedding, Orla said that even the Irish rain pouring down from the sky wasn’t enough to dampen her spirits ahead of her big day. “We both just felt so relaxed and just so happy – there were no nerves at all,” Orla said.

“However the weather was terrible that morning, and it never stopped raining. “I remember getting to the church and seeing my train having a black mark on it from the wet and rain but I didn’t care!

Thankfully the weather dried up outside for photos and for arriving to the hotel.” She added, “Our church was filled with warmth and love throughout the service and both of us kept smiling at each other throughout. It was lovely.”

As Gary is a self-employed electrician and a farmer by trade, it was only fitting that the newlyweds were whisked away to their wedding reception in his New Holland 8260 tractor.

It was there that the new Mr and Mrs Warrington enjoyed their three tier cake made by a family friend, music and a drinks reception.

“The music at the drinks reception was by The McBennett Sisters,” Orla explained. “They really got the guests prepared for the evening/night ahead.

“Our first dance was ‘Thinking Out Loud’ by Ed Sheeran, and we danced the night away until 1.30am. “The party then continued in the residents bar until the early hours of the morning. “Overall we had the best day ever.”

Orla concluded. “Everything was so special to us, and it meant a lot having local businesses play a part in our wedding day. “We would love to do it all over again and wouldn’t change a thing about it.”