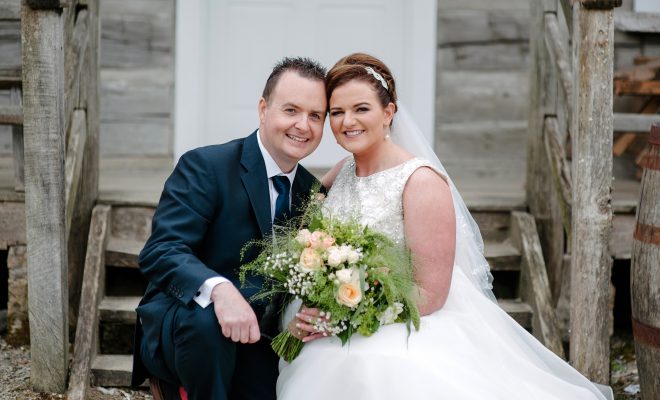 Perfect day as best friends get married at the Folk Park

A romantic proposal on a glittering beach transformed into a wedding that was “special and perfect in every way” for Sarah Connor and Warren Hamilton.

The newlyweds, who are both from Omagh, were married by officiant Brian Barr in the Mountjoy Meeting House, Ulster American Folk Park on May 28, 2016.

Despite vaguely knowing each other from the Omagh Leisure Centre, it was after the pair spoke properly on a night out in the summer of 2011 that their love began to blossom.

“He played squash at the same time every week as I attended Khai Bo classes at the leisure centre,” Sarah explained. “We had the awkward hellos back and forth for weeks, until we randomly bumped into each other in town one night and spoke properly to each other.

“I knew instantly that we had very similar bubbly personalities, and we were going to get on well. I liked the fact that he talked a lot. “There was definitely no awkward silences on our first date, and we never ran short of anything to say. The conversation flowed like we’d known each other forever.”

Together for almost three years, it was when the pair went for a long walk on the beach while on holiday that Warren shocked Sarah with a surprise proposal.

Getting down on one knee, he presented his love with a shining platinum solitaire ring which Sarah “loved to bits”. “I was so shocked at first but really happy,” Sarah reflected. “We had a few celebration drinks that night, and the happy tears were flowing after phoning home to tell the news. 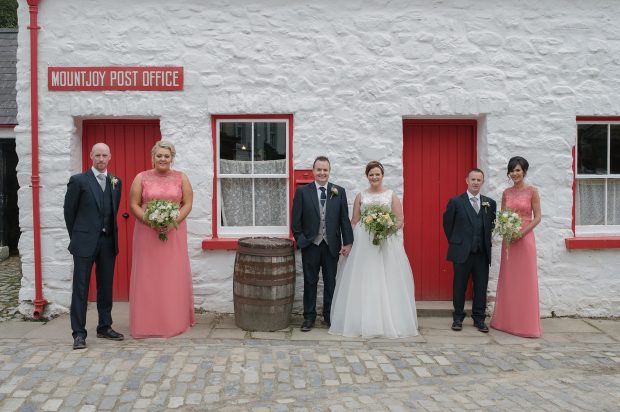 “I was caught out well because he said he would never propose on holiday or on days when everyone most expects it, like Valentine’s Day or birthdays.”

Excited to begin wedding planning, Sarah had her heart set on a “mostly traditional” wedding, featuring a dash of girliness for good measure. “

Everyone knows I love sparkly bling and anything pink and beautiful as I am very girlie so I wanted to incorporate that into my wedding in some way,” Sarah smiled. “I also wanted wild and rustic flowers.”

With wedding dress shopping proving an enjoyable experience for Sarah, it was in Perfect Day, Lurgan that the Omagh Health Centre medical secretary found a dress with just the right amount of bling for her.

“I chose a Ronald Joyce dress which had lots of sparkly diamantes and beads… surprise, surprise!” Sarah laughed.

On the morning of her big day, Sarah described feeling very “cool and calm” in her house as she was getting ready. “I only started to get nervous in the car on the way to the church,” she described.

“It was sunny all morning, and nearly too bright for photos, but thankfully it dulled down and stayed dry. “Our service was very personal,” she added. “It was emotional at times and very special. We had Grainne and Darren Gallagher who sang beautifully.

We chose all the songs ourselves which was nice, and Grainne even learnt a new song she had never heard of before. I thought it was very touching.

“After the service I was just so smiley that I was happily married, and looked forward to the celebrations that evening.”

Whisked off to their wedding reception at the Waterfoot Hotel, Derry in vintage cars, it was soon time for the new Mr and Mrs Hamilton to tuck into their five-tiered wedding cake decorated with coral and peach flowers.

“I loved how attentive the staff were at the reception,” Sarah said. “They couldn’t have done more for us and the food was absolutely out of this world.”

With full live band, The Bizz from Moira setting an upbeat atmosphere, the newlyweds danced the night away alongside their 171 guests.

“Our day was so special and perfect in every way,” Sarah concluded. “We loved having all our family and friends with us in the one place for a whole day.  Those opportunities don’t come about very often. “I married my best friend so how could I feel anything other than bliss?”