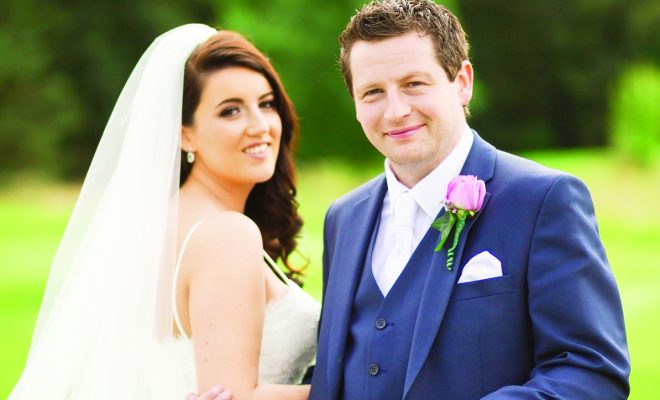 When Rachael Weir (née Eccles) looks back on her wedding photographs, she will be able to relive all the beautiful memories of her Summer wedding day.

Aside from becoming Mrs Weir in a church decorated in pretty pastel colours, she stood among immaculate sun-kissed gardens when she reached her wedding reception, and gazed in admiration at the wedding cake baked by her mum.

In a personal wedding service conducted by Rev Robert Herron, the Dungannon woman wed Ryan Weir on July 30, 2016 at Trinity Presbyterian Church, Omagh. It was Rachael’s sister, Lauren who introduced the pair for the first time during a night out with friends back in May 2013.

However, a year-and-a-half later, Rachael and Ryan were to become more than just friends. During a holiday to the Czech Republic’s mesmerising capital city, Prague, the Omagh man asked Rachael for her hand in marriage – and presented her with a platinum ring set with glittering diamonds in the shoulders and an eye-catching diamond in the centre.

This was something that Rachael certainly wasn’t expecting… especially as the pair had travelled to the ornate city in a large group to celebrate the 30th birthday of one of their friends.

“I was speechless. Possibly for the first time in my life,” Rachael laughed. “But I was so happy. I couldn’t wait to tell everyone at home. “I also absolutely loved the ring. I couldn’t have picked better myself.”

Eager to begin wedding planning straight away, they began viewing potential venues as soon as they arrived back to their beloved Northern Ireland. But the blushing bride-to-be eventually decided to book the Slieve Russell Hotel in County Cavan due to its beauty and scenic views.

“When we went to visit the hotel for the first time, the staff couldn’t have been more helpful,” Rachael explained. “That was something that we were looking for in a venue. “We also thought that they provided a great wedding package which catered for exactly what we wanted for the day.”

She added, “The hotel itself is gorgeous, offering immaculately kept gardens and a golf course which makes it a lovely backdrop for photos. “We were also very lucky, as the Woodford and Erne suite which we had chosen, was beautifully redecorated just in time for our wedding.” 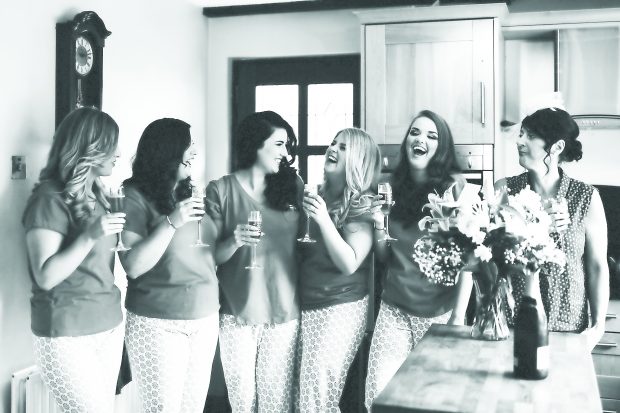 The blushing bride, Rachael Eccles shares a laugh with her beloved family and close friends on the morning of her Summer wedding day.

As Rachael’s wedding would take place in the Summer, she decided she wanted to incorporate pastel colours as much as possible into the finer details of her day, such as her flowers, stationery and bridesmaids dresses.

And happily, wedding gown shopping also proved a memorable experience for the office administrator. Even though she enjoyed trying on many dresses featuring different shapes and styles, it was in Serendipity Bridal in Fivemiletown, where Rachael found the perfect gown.

Fitted to the waist, it was made by a Spanish designer, called Pronovias and it featured a full-lace detailing and pretty mermaid-style skirt. “Serendipity Bridal have an amazing range of beautiful dresses,” Rachael said. “I couldn’t recommend them enough. Ruth, who I dealt with, was also so helpful.”

Rachael’s wedding was the perfect blend of modern and traditional, and she proved this in the transport that she used when her big day arrived.

In the memorable journey to the church, Rachael and her father, Morris travelled in an old-time 1958 Bentley S Type – but then she swapped the vintage car for a modern Chrysler limousine for the journey to the Slieve Russell Hotel with her husband.

“Thankfully the weather was mild and partly sunny throughout my wedding day,” Rachael recalled. “That was great for photos, and when I spoke with our guests outside of the church. “Our service was also very personal, which was exactly what we wanted.”

To add a further sense of intimacy to the day, Rachael’s mother baked the newlyweds a four-tiered wedding cake, decorated with fresh flowers and completed with a Mr and Mrs cake topper. “It was just beautiful – I loved it,” Rachael smiled.

The new Mr and Mrs Weir’s day finished with lively music played by wedding band, BackBeat and DJ Shane Irwin and the dancefloor was packed all night.

“Our day was perfect, and everything went as planned,” the 24-yearold concluded. “I would like to say thanks to our parents, families and friends for making our wedding so memorable.” 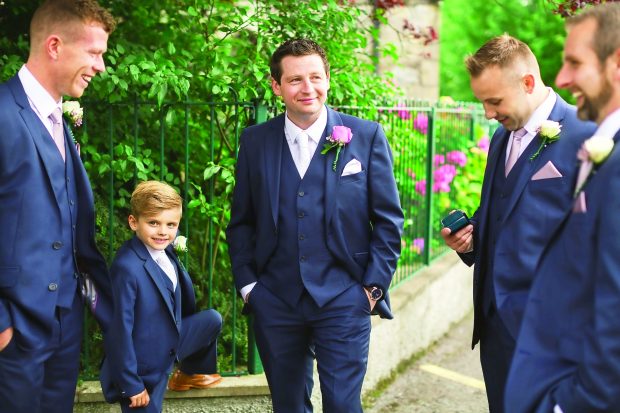